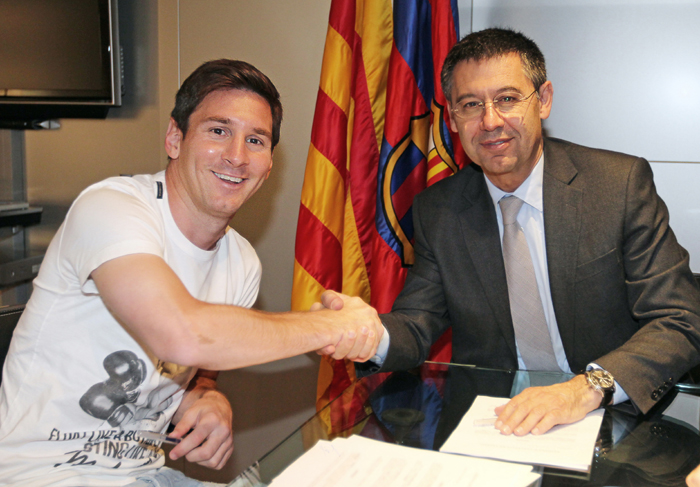 If Lionel Messi's mind is made up to leave Barcelona, the question turns to where he goes next.

His priority has always been to be part of a "winning project" at Camp Nou but his latest season was not only devoid of trophies, it was defined by chaos and ended in humiliation.

Messi has not asked for a transfer to put his feet up for the final years of his career. This is a considered move aimed at bolstering his successes, and in one competition in particular.

The Champions League has become his obsession, which puts all of Europe's super-clubs in contention and eliminates the less intensive, or more romantic, options, at least for now.

A fairytale return to Newell's Old Boys in Argentina, a project-build Stateside in the MLS or even a challenge at an aspiring European team in the mould of Diego Maradona's time at Napoli, will all become more likely once Messi is out of Barcelona.

But that is not likely to be his next step. Instead, Messi wants titles and a club he believes in again.

There will be no shortage of clubs pining for arguably the greatest player of all time but once they have done the sums, particularly in the heat of the coronavirus crisis, only a few will be able to make the numbers work.

On the back of their Champions League triumph, Bayern Munich are the pre-eminent force in Europe but they are unlikely to be able to afford Messi, aged 33, and with a base salary of around 60 million euros per year.

The same goes for Jurgen Klopp's Liverpool, as well as Juventus, who remain restricted by the enormous outlay needed to sign Cristiano Ronaldo two years ago.

Perhaps Ronaldo's transfer, which is yet to deliver Juve the European success they hoped it would, might even make some of Messi's potential suitors nervous.

Madrid, meanwhile, would love nothing more than to prize Messi from their rivals - and they have tried before - but even if Messi wants to leave Barca, he is not out to burn his reputation and legacy.

Only the wealthiest are left standing but would the history of Manchester United or the upward momentum of Frank Lampard's Chelsea be enough to persuade Messi?

In recent seasons, neither has lasted in the Premier League's title race, let alone been serious contenders in the Champions League.

Those able both to afford Messi, and convince him, may only be Paris Saint-Germain and Manchester City, with Inter Milan a third option.

City would appear favourites but the club have always trodden carefully around the prospect of Messi. Their sporting staff, including coach Pep Guardiola, sporting director Txiki Begiristain and chief executive Ferran Soriano, all have connections with Barcelona they are keen to respect.

If City could be seen to be offering a safe haven for Messi's desire to go, rather than snatching him away, it would surely be an opportunity they could not pass up.

Messi could propel them in the Champions League and launch the City brand, so important to the club's Abu Dhabi owners, to a different level.

For PSG, whose frustration in Europe has been comparable to City's, even if they broke new ground by reaching last weekend's final, Messi would also represent a seismic addition to the Qatari project.

A Neymar-Messi-Kylian Mbappe front three would not be a difficult sell.

Inter's pitch would be more personal, given Messi's father Jorge has reportedly bought a house close to the club's offices while the Italian outfit have fostered close relations with the Messi family for years.

With Antonio Conte as coach and ambitious Chinese owners, Messi might be drawn to Inter, where the tax regulations would be less punitive and the disapproval less pronounced, given the club's history and tradition.

None of the options are without risk. Of the leading trio, only Inter have ever won the Champions League but even that was in 2010.

Success is not guaranteed for club or player, with Messi enduring an injury-interrupted season himself last term.

But despite calls from fans and rival candidates, there is no suggestion yet that Bartomeu is considering his position.

Bartomeu's new sporting director Ramon Planes said on Wednesday the club "would have to fight" to ensure the relationship between Barcelona and Messi continues. It may be too late.