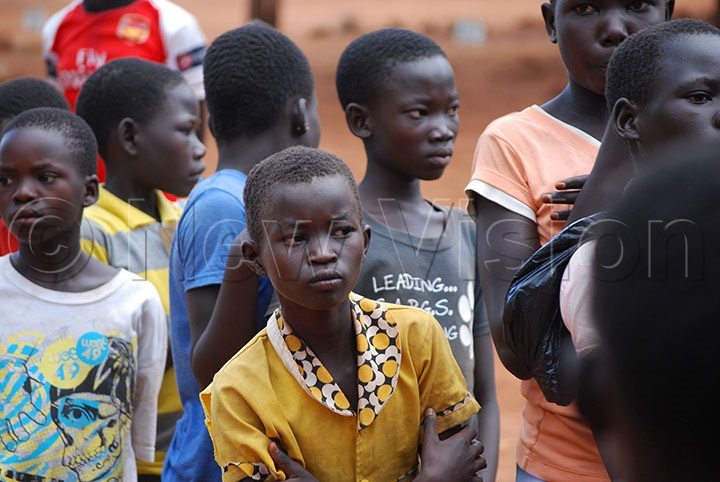 Meli, a single mother of seven, now grows vegetables in her backyard to make ends meet. She says this is the most difficult time they have faced as they try to find enough food to feed their families
TOP News STORY
Tue Aug 18 2020 .
COVID-19: A double tragedy for women and girls in refugee settlements

Meli, a single mother of seven, now grows vegetables in her backyard to make ends meet. She says this is the most difficult time they have faced as they try to find enough food to feed their families

"With a monthly food ration of 11kg of sorghum and 1.5kg of beans that the Office of the Prime Minister (OPM) and the World Food Programme (WFP) gives me, I had to think outside the box during this COVID-19 period on how to survive with movement restriction," Jane Meli, a refugee living in Arua district, says.

Meli, a single mother of seven, now grows vegetables in her backyard to make ends meet. She says this is the most difficult time they have faced as they try to find enough food to feed their families, adding that coronavirus (COVID-19) has worsened the situation of women and children who fled the war unaccompanied.

Before COVID-19
Before COVID-19, Meli and others would go to the host communities to do casual work to supplement their food rations, which is not happening now because they have to observe social distancing and cannot easily be allowed into the communities due to the health ministry guidelines and restrictions on movement.

Even to get seeds to plant in her backyard has been a nightmare, as she could not get them following the closure of markets in the neighbouring districts of Koboko and Arua where they used to buy them from.

They now depend on poor quality of seeds which cannot give them big yields."To me, COVID-19 is proving to be worse than the war I ran away from. Getting food is next to impossible, as is getting basic needs like salt, soap, medicine and other essential items we need," she says.

She says learning that her monthly food ration has ran out without having alternative sources of food is stressful.
A resident of Village Two in Omugo refugee settlement, Arua district, Meli started using the piece of land allocated to her by OPM to cultivate crops to supplement her food rations.

Land allocations
Godfrey Mayego, the deputy commandant of Rhino refugee settlement under the OPM who is overseeing Omugo, says the refugees are given a plot measuring between a 30x30ft and 50x50ft on which to grow crops.

He says when refugees arrive in the settlements, they are registered and allocated pieces of land.
"We encourage them to plant fast-growing crops," he adds.

The war broke out in South Sudan in December 2013 after a political disagreement between President Salva Kiir and his former deputy Riek Machar that left many needy and vulnerable.The forced migration of a large number of South Sudanese has seen over one million refugees seek safety in West Nile, Uganda.

Uganda policy on refugees
Uganda is one of the largest refugee-hosting nations in the world, with over 1,400,000 refugees as of February 2020.   Uganda has relatively "friendly" refugee policies such as rights to education, work, private property, healthcare and other basic social services.

Innovative
According to David Sebit, a refugee and father of six, before COVID-19, refugees would not only use the allocated piece of land, but would go an extra mile to hire over one acre from the host communities, to grow food crops such as cassava, pumpkins, maize and vegetables.

"The food given to us is too little to sustain us.  I hire land to grow food for both consumption and sale," he says.
Sebit, a former radio repairer in Yeri, South Sudan, says it is heartbreaking to watch his family starve.

"Men are heads of the family.  It is because of this God-given responsibility that the family looks at us for survival. I had to act on this calling," he says, but was quick to add that it is difficult during the COVID-19 epidemic.

Before COVID-19
Before COVID-19, over 900 refugees and host community farmers were grouped and trained by the Association of Volunteers in International Service (AVSI) Foundation under Support to Risposta all ‘Emergence (SURE) project.
However, the skills are not being put to use due COVID-19 according to Maria Gaudenzi, the SURE programmes manager.

She says they had secured euros 458,821 from the Italian Agency for Cooperation and Development for Emergency Response to support South Sudanese refugees.

They also implemented an integrated service in food security, livelihood, security as well as water and sanitation.
"There was increased agricultural productivity among the refugees and the host communities, with a focus on the protection of the environment, food security and strengthening coexistence," Gaudenzi says.

The groups were each given pieces of land to demonstrate their enterprises using agronomic practices, such as irrigation, soil and water conservation.

Frederick Steward Ndema, the AVSI food security and livelihood officer, says they demonstrate to refugees how to conserve soil and water, using stone lines and water ditches because the soils are rocky.The refugees had adopted good agronomic practices, such as irrigation, water and soil conservation through the use of ditches, nursery beds and intercropping.

COVID-19 has not only affected food security
Nancy Igarija, who was 10 years old when she followed people who were running towards Migale at the border of Uganda and South Sudan."By the time we reached the border, I was almost dead. I woke up and found myself at Bidibidi refugee settlement reception centre in Yumbe district.

I was told that trucks from OPM and United Nations High Commissioner for Refugees (UNHCR) picked us from Migale to Yumbe," she narrates. Bidibidi refugee settlement in Yumbe district which sits on 88. 8 square miles is the largest camp hosting over 270,000 refugees.

"Upon regaining my senses, I could not recognise anyone around me and strangers from OPM came and took us to safe houses where many children without parents had been gathered," Igarija who is now 13 years old, recalls.

For a long time, they only people they interacted with were officials from different organisations who registered them.
Later Igarija and other unaccompanied children were transferred to Zone 5 in Bidibidi refugee settlement.

She was enrolled into Ayivu Primary School in Ariwa sub-county in Yumbe district in Primary four as she kept her hopes of finding her parents one day, alive.

Hopes fade
Unfortunately, Igarija's hope was dashed when officials working to reunite unaccompanied minors with their relatives, told her that her parents and other relatives had died.

Another unaccompanied minor, Hellen Nyaka, also came to Uganda at the age of 14. The primary seven student says life in the camp, in a foreign land without relatives, is not a bed of roses.

The COVID-19 has worsened the situation. "Do you know we had families that loved us and provided us with every need of our lives?  Let me tell you I had parents who used to guide me with homework, who loved me, brothers and sisters whom I used to play with. Now look at me, restricted to move around the settlement," she says.

She impatiently adds, "You people outside the camp think we are getting free things from donors, but they cannot meet every need we have, like our parents did.

I have told you I am in primary seven but one of the donors working in this camp only gave each of us just one exercise book of 36 pages and one pen at the beginning of the term. We do four subjects. One exercise book for the whole term for all the four subjects makes no sense,' she says.

Their education hangs in balance
Edina Olire a 14-year-old in primary five at Ayivu primary school says if even if she completes primary seven, there is no hope of joining secondary school.

"COVID-19 has affected the donors that were helping us and the host community are sometimes hostile to the refugees," she says.

Monday Atiku, a caseworker with Save the Children, says the biggest challenge they face is counselling children to come to terms with the COVID-19.

Challenges
The volunteers who are helping these children to cope with the situation are also not spared by emotions.
"It is so challenging when children start asking you why they are not going to school and why they are restricted from visiting their friends and why there is a shortage of food. We sometimes breakdown listening to these stories.

In fact, some of them even attempt to run away from the camp because of the current the situation," says Atiku.

Trauma
Atiku says most of the children are traumatised especially those who saw their parents and relatives killed in South Sudan and when you confine them in one area they think they will be also be killed.

"They do not understand why they are living in a camp without food, education and other basic needs. They sometimes withdraw and won't talk to anyone," she says.

This report was supported by the Africa Women Journalism Project (AWJP) in partnership with the International Centre for Journalists (ICFJ).