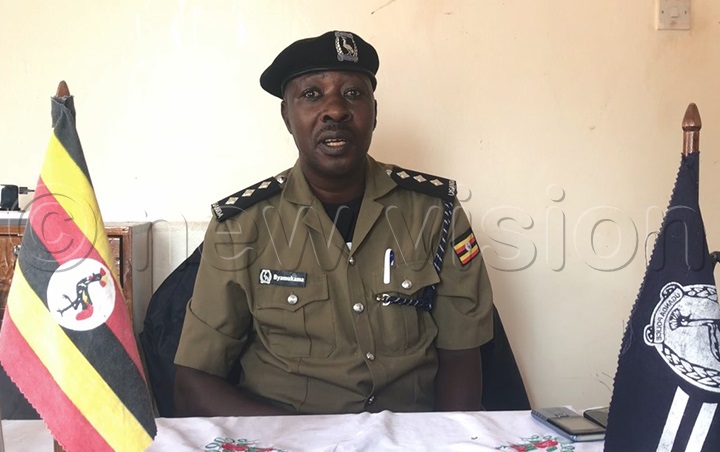 Benon Byamukama, the Kalangala District Police Commander, is struggling to recover from a coma after a brutal attack by a group of people in a local bar.

The incident occurred on Thursday night at Buggala Trading Centre at around 1:00 am during an operation to enforce the curfew and the presidential directive of keeping bars closed.

Byamukama and his three junior officers had responded to community concern over noise from a bar where more than 20 people had gathered to merry make.

The rest of the officers and a Local Defence Unit team had gone for night patrols in other villages.

The bar is located about 100 meters from the Police station. Upon arrival, a prominent bar owner known Maama Muwada and her clients hurled insults at Byamukama and a scuffle ensued.

In the process, Byamukama was hit on the back of the head with a beer bottle and he suffered a deep cut to his scalp and forehead which left him bleeding profusely.

The other officers fired in the air to subdue the attackers. A few people escaped during the scuffle while the majority were arrested and taken to the Police station.

By that time, was fainting and he was rushed to a nearby health centre for attention.

As of Friday morning, he was still on life support at Kalangala Health Centre IV. The doctors and district officials were working out plans to refer the lifeless senior officer to Masaka Regional Referral Hospital for intensive care.

So far, 22 people including a bar owner are in custody for violating curfew and the presidential directives in addition to assaulting a Police officer.

Subsequent operations went on Friday to look for more suspects in connection with the assault.

According to preliminary investigations, it is alleged that it is the bar owner who hit him due to a longstanding grudge between the two.

Daniel Kikoola, the Kalangala Resident District Commissioner, told New Vision that the same woman was arrested last month for similar violations before being released on bond.

Kikoola said that the suspects will be produced in court after conclusive investigations.

Among the counts expected to be preferred against them include the violation of presidential directives, noise pollution, and assault of a Police officer.

He said that Kalangala residents have continued operating secretly due to a lack of enough Police numbers.

"It is becoming difficult to enforce lockdown regulations due to the few Police and LDU officers. People operate their bars secretly at night and even during the day," he noted.

Kalangala district authorities maintain that violation of the COVID19 directives and failure to adhere to the ministry of health safety guidelines of wearing masks, keeping social distance, and regular handwashing, may spark infections among the residents.