This year's downsized hajj may prove to be the safest ever despite the ever-present threat posed by the novel coronavirus.

In past years pilgrims have faced a host of viral illnesses, with some falling sick, but a raft of measures are in place for the relatively modest number allowed to attend this year.

The hajj is usually attended by upwards of two million Muslims, who converge on the Saudi city Mecca for one of the world's biggest annual gatherings.

In the past, pilgrims returning home have developed respiratory diseases after mingling with large crowds and staying in cramped pilgrim camps where social distancing was unheard of.

Kuwaiti worshipper Alia al-Dulaimi told AFP she suffered a severe cough for three months after performing the pilgrimage in 2003.

"I couldn't even get close to the Kaaba at the time because of how many people were there," she said.

The Kaaba is a large cube-shaped structure in the centre of Mecca's Grand Mosque towards which Muslims around the world pray.

"I wish I was in Mecca this year to see the new health measures," Dulaimi said.

- Sterilised pebbles -
This year, for the first time in modern history, Saudi officials have drastically restricted the number of pilgrims allowed to participate and enforced strict new health measures.

Just 10,000 Muslims, all resident in the kingdom, are being allowed to perform the hajj -- 0.4 percent of last year's 2.5 million attendees from across the globe.

But despite the pandemic, many pilgrims said they felt safer joining a limited number of fellow faithful for the hajj as the risk of both infection and logistical upsets was limited.

A stampede in 2015 that killed up to 2,300 worshippers was one of a series of deadly incidents that had sparked criticism of how the pilgrimage was managed. 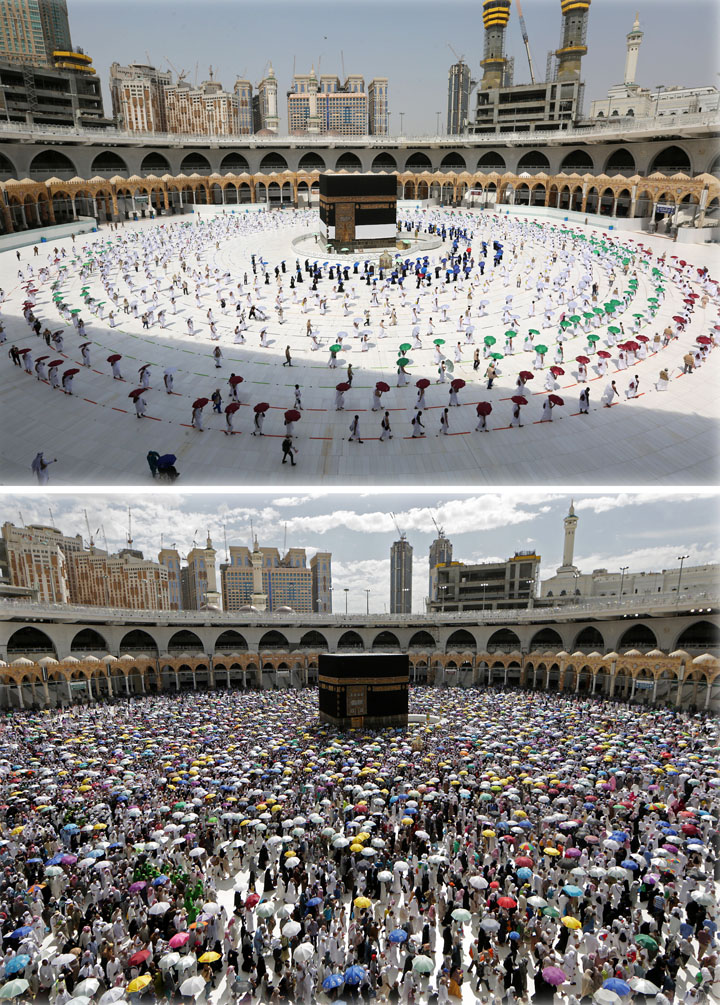 But the scene on Wednesday was a vast contrast to that: mask-clad pilgrims performed the "tawaf", a ritual walk around the Kaaba, in small groups, following carefully spaced routes marked on the white marble floor.

Workers continuously cleaned and disinfected the holy site on Wednesday, in uniforms resembling those of hospital staff.

Attendees were given elaborate amenity kits that included sterilised pebbles for the ritual Stoning of the Devil, disinfectant, masks and a prayer rug, according to the hajj ministry.

Several health facilities, mobile clinics and ambulances were on hand, the ministry added, available to pilgrims who were required to wear masks and maintain social distance.

Asif Ahmed, a professor at Britain's Aston Medical School, declared this year's hajj "safe" because of the preventative measures.

"The focus is to prevent a coronavirus outbreak, and that seems to be working," he told AFP.

"We will know for sure in a month or so."

- 'Real opportunity' -
Saudi officials had initially said just 1,000 pilgrims residing in the kingdom would be permitted to participate, but local media reports say as many as 10,000 will join in.

Some 70 percent of the pilgrims are foreigners residing in the kingdom, while the rest are Saudis, authorities said.

In March, Riyadh suspended the year-round umrah pilgrimage, as the number of global coronavirus cases continued to climb.

The kingdom has so far recorded more than 270,000 coronavirus cases, the largest toll among the Arab Gulf states.

"This year's hajj was a good opportunity for the Saudi authorities to learn about the effects and importance of wearing a mask in curbing the spread of diseases among pilgrims," infectious diseases doctor Ghanem al-Hujailan told AFP.

EC petitioned over nomination of 145 candidates

EC petitioned over nomination of 145 candidates