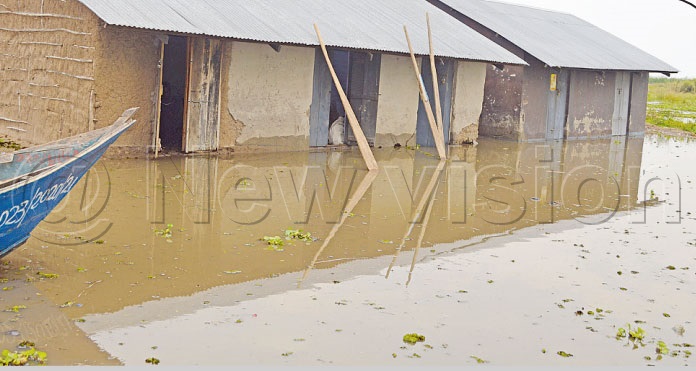 The water abstraction point in Wankende village, is also affected. The residents are scared that the water could mix with oil and cause many other health-related challenges.

According to John Mugungu, a resident of Kityanga cell, oil could mix with the water that residents are collecting for domestic use.

Seremosi Kiiza, another resident says during the oil surveying exercise, there were many blasts done near Lake Albert, which residents fear could have cracked the ground, causing water to sip out and flood.

Kiiza says even their houses got cracks. He added that the floods of 1960 were caused by heavy rains that left the entire area flooded.

However, he says, there are no heavy rains currently, yet the volume of the floods keeps increasing.

The district environmental officer, Rodgers Tumusiime, says the oil wells are not yet drilled and that the oil is still in the immature stage and, therefore, it cannot cause any harm.

Tumusiime said no much activity was done on the oil wells during the surveying process and that if it had been an oil pad where some drilling happened, there would be reason to worry.

He says the blasts were professionally done, to minimise harm to the earth crust and cannot be the cause of flooding, adding that lakes Kyoga and Victoria are also flooding, yet there was no oil surveying there.

The two oil wells are among the six oil fields under the Tilenga Project.