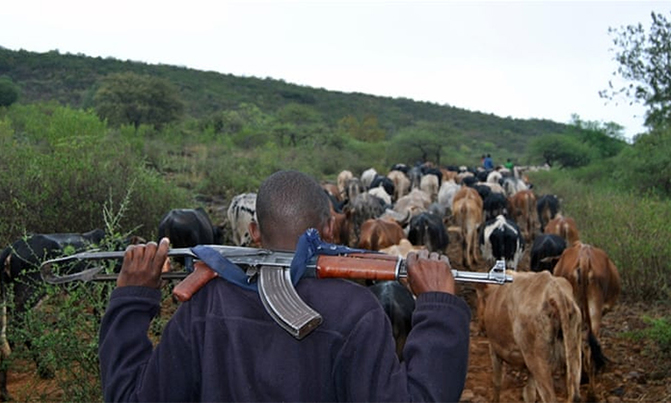 One person, a Pakot, was killed during the pursuit of armed rustlers that lasted over 30 minutes.
TOP News STORY
Thu Jun 11 2020 .
Five cattle rustlers escape arrest with bullet wounds

One person, a Pakot, was killed during the pursuit of armed rustlers that lasted over 30 minutes.

Security agencies led by Police are pursuing five cattle rustlers that escaped with bullet injuries sustained after a fierce battle with the security forces, in Kween district, on Wednesday.

The armed rustlers were intercepted at Cheborom village (Kween) by both the Police and army. A total of 203 stolen cows were recovered.  Police said cattle theft is on the increase in the area and efforts are underway to thwart the rising crime.

One person, a Pakot, was killed during the pursuit of armed rustlers that lasted over 30 minutes, according to the Police's preliminary findings.

So far, three suspects (Pakot) have been arrested, while five remain on the run. The Pakot are members of the Nandi speaking group of tribes (though heavily acculturated with Karamojong and Turkana).

The Anti-Stock Theft Unit (ASTU) commandant superintendent of Police, Musa Nabende, explained that the operation begun after his team got reports that 22 head of cattle, belonging to Peter Comboi, had been stolen by the Pakot warriors.

Subsequently, a team of ASTU personnel and those from the 51 Uganda Peoples Defence Forces (UPDF) battalion mounted a search by following the foot/hoof marks leading to a kraal allegedly belonging to a one Ngololo. During the search, 203 head of cattle were intercepted at Sugunya village in kween district.

Among the cattle intercepted were those stolen from Comboi.

The animals were taken to Chepsukunya UPDF barracks, pending investigations. Last month, the UPDF killed two cattle rustlers in Nadunget, a few kilometres from Moroto municipality in an operation, where over 50 head of cattle were recovered.

Kiruhura district registered the highest number of cases with 387, followed by Nakasongola (162) and Tororo (158). Four districts, including Buikwe and Karenga, did not register any case of cattle theft.