From Seattle to New York, tens of thousands of protesters took to the streets demanding tougher murder charges and more arrests over the death of Floyd.

On Saturday, this girl jumped holding a sign (Justice Now!) while she and her family protested in the Boyle Heights neighborhood of Los Angeles in response against the death of George Floyd. (AFP)

From Seattle to New York, tens of thousands of protesters took to the streets demanding tougher murder charges and more arrests over the death of Floyd.

Curfews were imposed on major US cities as clashes over police brutality escalated across America with demonstrators ignoring warnings from President Donald Trump that his government would stop the violent protests "cold."

Minneapolis, the epicenter of the unrest, was gripped by a fifth consecutive night of violence on Saturday with police in riot gear firing tear gas and stun grenades at protesters venting fury at the death of George Floyd, an unarmed black man, during an arrest in the city on Monday. 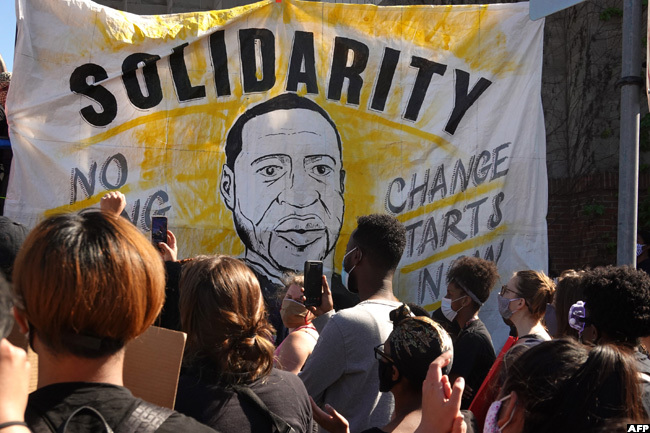 On Saturday, demonstrators protested the killing of George Floyd near the city's 5th police precinct in Minneapolis, Minnesota

Los Angeles, Chicago and Atlanta were among two dozen cities ordering people to stay indoors overnight as more states called in National Guard soldiers to help control the civil unrest not seen in the United States for years.

From Seattle to New York, tens of thousands of protesters took to the streets demanding tougher murder charges and more arrests over the death of Floyd, who stopped breathing after Minneapolis police officer Derek Chauvin knelt on his neck for nearly nine minutes.

In Los Angeles, officers fired rubber bullets and swung batons during a testy standoff with demonstrators who set fire to a police car. 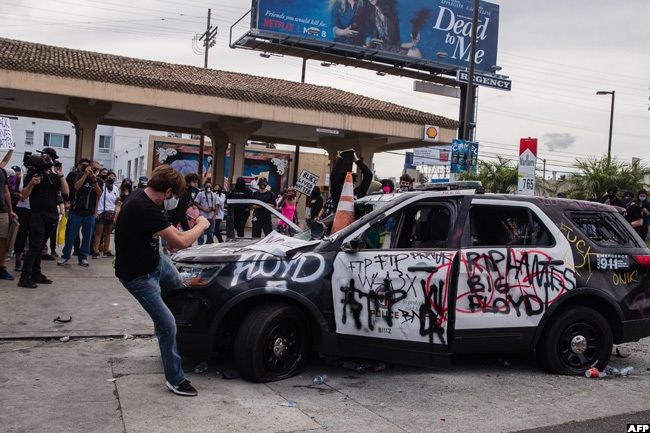 A demonstrator kicks a damaged police vehicle in Los Angeles

Police and protesters clashed in numerous cities including Chicago and New York, with officers responding to projectiles with pepper spray while shop windows were smashed in Philadelphia.

Trump blamed the extreme left for the violence, including widespread looting and arson in Minneapolis, saying rioters were dishonoring the memory of Floyd.

"We cannot and must not allow a small group of criminals and vandals to wreck our cities and lay waste to our communities," the president said.

"My administration will stop mob violence. And we'll stop it cold," he added, accusing the loose-knit militant anti-fascist network Antifa of orchestrating the violence. 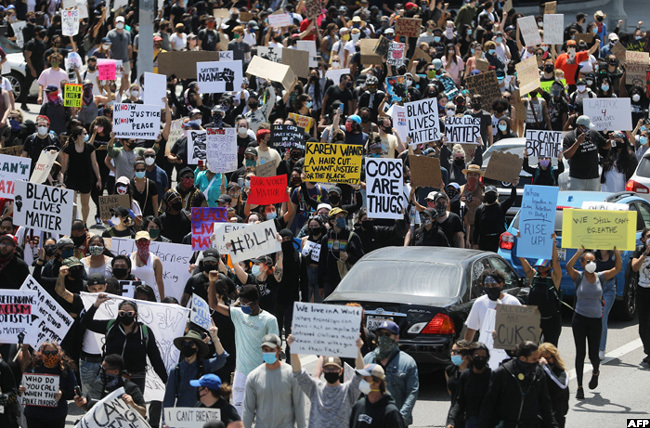 Democratic candidate Joe Biden condemned the violence of the protests, but said on Sunday that US citizens had every right to demonstrate.

"Protesting such brutality is right and necessary," he said. "But burning down communities and needless destruction is not." 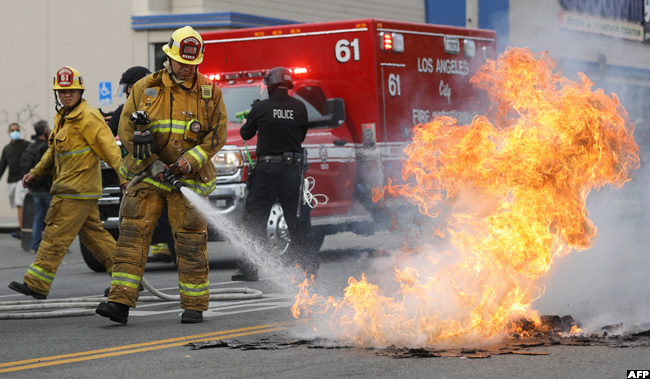 Rioters to be 'decimated'

Peaceful protests occurred too, including in Toronto as the movement spread beyond America's borders.

Demonstrators nationwide chanted slogans such as "Black Lives Matter" and "I can't breathe," which Floyd, who has become a fresh symbol of police brutality, was heard saying repeatedly before he died.

"We're not turning the cheek anymore. Black lives matter. They will always matter. And we're here today to show that," said makeup artist Melissa Mock, who joined several thousand in a daytime protest in Miami. 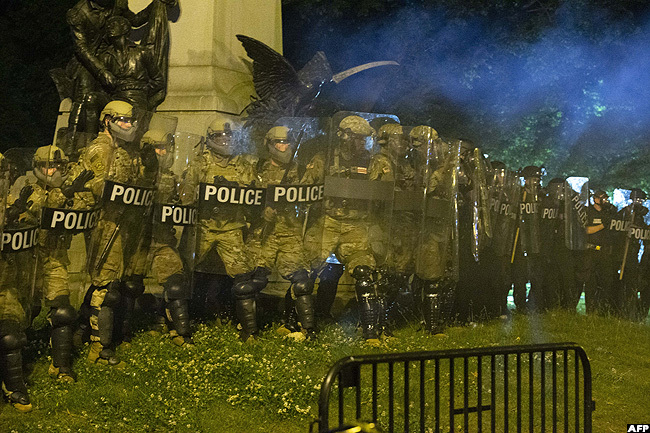 Police officers in riot gear watch demonstrators as they chant outside of the White House on Saturday in Washington D.C.

Minnesota Governor Tim Walzs said he was mobilizing the state's entire 13,000-strong National Guard to deal with rioters who have looted shops and set fires in the Minneapolis-St. Paul area.

All major freeways leading into Minneapolis were closed Saturday night with military helicopters overhead as the state braced for more rioting, arson and looting, with locals saying much of the violence was being perpetrated by outsiders.

Some placed flowers in front of the shop where Floyd was arrested on Monday, before his death in the hands of police was recorded in a horrifying cellphone video since seen around the world. 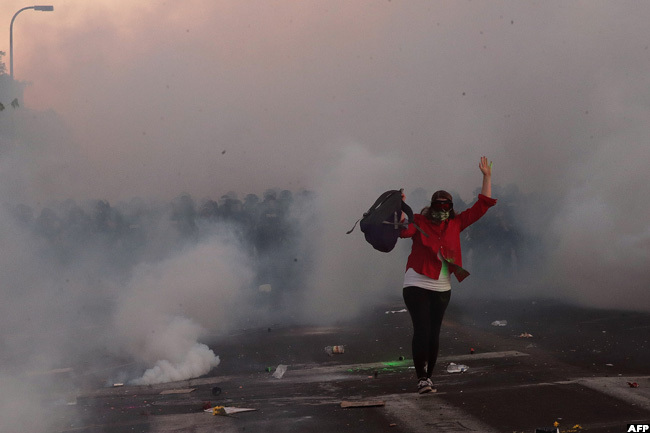 This woman fled from a volley of tear gas in Minneapolis

In Houston -- where Floyd was born and raised -- an old friend of his, Sam Osborne, said as an African American he feared for his life.

"I'm really messed up they killed him up. I'm wondering like, what could possibly happen to me?" he told AFP.

Houston's mayor announced at a press conference that Floyd's body would be brought back to the Texas city.

At least eight states -- including Texas, Colorado and Georgia -- activated the National Guard, who were also deployed around the White House to help handle the protests there. 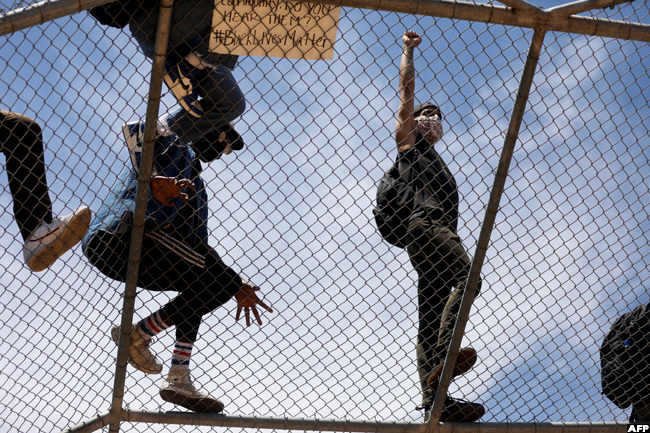 In Washington, protesters faced off with secret service agents outside the White House for a second straight night as Trump faces the most serious spate of civil unrest of his presidency, in the middle of the coronavirus pandemic.

Looting occurred in Miami, where a curfew was also announced, while in New York mayor Bill de Blasio said a video appearing to show an NYPD police car drive into protesters in Brooklyn was "upsetting" but that he did not blame the officers.

In Los Angeles, the city's mayor expanded a curfew order as looting broke out. Stretched emergency services scrambled to put out the two blazes on Melrose Avenue, as similar scenes played out in Washington with officials extinguishing a major fire at a hotel off Layfayette Square. 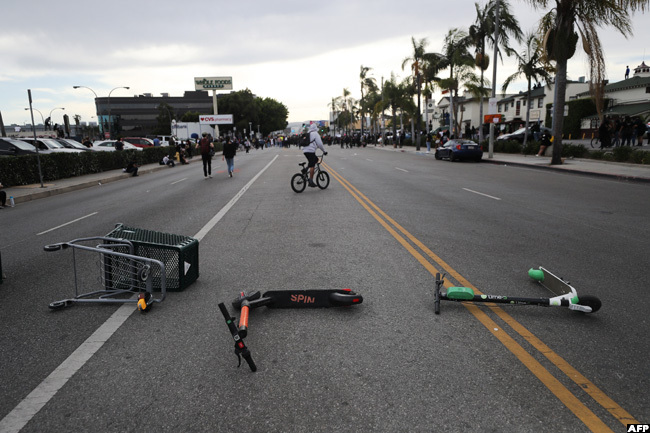 This street was blocked during demonstrations in Los Angeles

Protests are expected to continue even after Chauvin, the now-fired Minneapolis police officer accused of Floyd's death, was arrested and charged with third-degree murder on Friday.

Floyd's family and many protestors want a tougher charge brought and have also demanded that three officers who assisted him be charged as well.

Villa and KCC in tricky situation