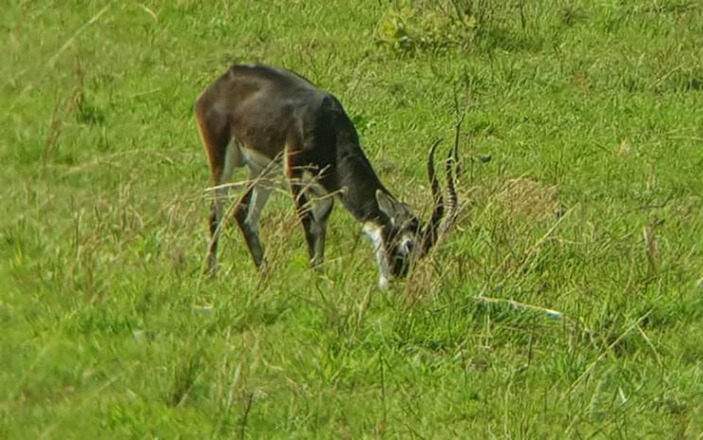 Opportunities like seeing white-eared kob, which was considered extinct in Kidepo Valley National Park (KVNP) are rare. However, Gilbert Manyimanyi, a ranger has dedicated his life's work to revolve around such opportunities.

This comes in rapid succession to owls, shy cheetahs, and lions that tourists spend fortunes to see.

"This is good news for conservation," said Manyimanyi adding: "There are more rare wildlife species being sighted again in Uganda's wild places. Last year, the Uganda Wildlife Authority (UWA) announced the sighting of a white-eared kob in Pian Upe Wildlife Reserve. Our darling elephant Bulbul which sips beer returned after eloping with another family in South Sudan for a year!"

Previously, all UWA had of the treasured white-eared kob was a blurred photograph shot in haste without good light. The same species has lately been seen grazing in KVNP.

"This tare one is an addition to what I saw during an evening game drive when I also saw Thomson's Gazelles in December last year," bragged Mayimayi.

"This is another specie that had been reported extinct in Uganda. I had to verify those gazelle images with Grammy, who explained that the animals could be returning from South Sudan and the Turkana side of Kenya."

The Uganda Wildlife Education Center executive director James Musinguzi attributes the appearance of a mammal thought to be extinct to the national conservation efforts.

"Wildlife is faced with threats of poachers, climate change, and loss of habitat," said Musinguzi.

"This is a vicious circle of challenges conservationists are battling. Tourists are astonished seeing such animals resurface to slinking through the rocky terrain again," he added,

But UWA spokesperson Gessa Simplicious said they must be able to identify where a given species occurs and what habitat they need to exist.

"By reporting species sightings to UWA, one helps biologists build a picture of the state of our state's biodiversity," sums up Gesa.

UWA and UWEC ought to deploy an extensive network of researchers, professionals, and even amateurs to work out the conservation status in Uganda.