Zookeeper mauled by lions at Australian zoo
Next Story

"People first" was the keyword in the discussions. Xi referred to the recovery of an 87-year-old COVID-19 patient after 47 days of care by a team of 10 doctors and nurses.

"People first" was the keyword in the discussions. Xi referred to the recovery of an 87-year-old COVID-19 patient after 47 days of care by a team of 10 doctors and nurses.

BEIJING, CHINA -- Eradicating absolute poverty, upholding people-centered philosophy and seeking new opportunities from challenges, Chinese President Xi Jinping brought reassuring messages at times of uncertainty and difficulty.
Xi spoke on a wide range of topics at this year's "two sessions," which closed on Thursday.
The two sessions are the country's annual meetings of the National People's Congress (NPC) and the National Committee of the Chinese People's Political Consultative Conference (CPPCC).
Xi, also general secretary of the Communist Party of China (CPC) Central Committee and chairman of the Central Military Commission, participated in deliberations with national legislators and joined in discussions with political advisors.
PEOPLE FIRST
An NPC deputy himself, Xi joined deliberations with lawmakers from north China's Inner Mongolia Autonomous Region on May 22, the first day of the annual session of the national legislature.
"People first" was the keyword in the discussions. Xi referred to the recovery of an 87-year-old COVID-19 patient after 47 days of care by a team of 10 doctors and nurses.
"Many people worked together to save a single patient. This, in essence, embodies doing whatever it takes (to save lives)," he said.
China mounted swift and sweeping actions to contain the disease. It has mobilized the best doctors, most advanced equipment and high-demand resources. The eldest patient to have been cured is 108 years old.
"President Xi emphasized people and lives are the top priorities," said Huhbaater, a professor of Inner Mongolia Agricultural University and an NPC deputy who heard Xi speak.
NEW OPPORTUNITIES
China decided not to set a specific annual economic growth target for 2020, but set eyes on winning the battle against poverty and finishing building a moderately prosperous society in all respects.
Xi touched upon the absence of a numerical growth target. "Had we imposed a target, the focus would have been strong stimulus and a simple grasp on growth rate. That is not in line with our social and economic development purposes," he said.
Xi urged efforts in seeking new opportunities amid challenges as he joined discussions with national political advisors from the economic sector on May 23.
"Our economy is still characterized by ample potential, strong resilience, large maneuver room and sufficient policy instruments," Xi said.
China has the largest industrial system in the world with the most complete categories, strong production capabilities and complete supporting sectors, as well as over 100 million market entities and a talent pool of 170 million people.
The Chinese president anticipates faster growth in the digital economy, intelligent manufacturing, life and health, new materials and other strategic emerging industries, highlighting the creation of new growth areas and drivers.
Xi stressed steady progress in creating a new development pattern where domestic and foreign markets can boost each other, with the domestic market as the mainstay.
He called for unwavering efforts to make economic globalization more open, inclusive and balanced so that its benefits are shared by all, and to build an open world economy.
PUBLIC HEALTH PROTECTION
On May 24, Xi joined deliberations with lawmakers from central China's Hubei Province, which was the hardest hit by COVID-19.
"We must face the problems upfront, step up reform and waste no time in addressing the shortcomings, insufficiencies and loopholes exposed by the epidemic," he said, stressing fortifying the public health protection network.
Xi noted several priorities: reforming the disease prevention and control system; boosting epidemic monitoring, early warning and emergency response capacity; perfecting the treatment system for major epidemics; and improving public health emergency laws and regulations. 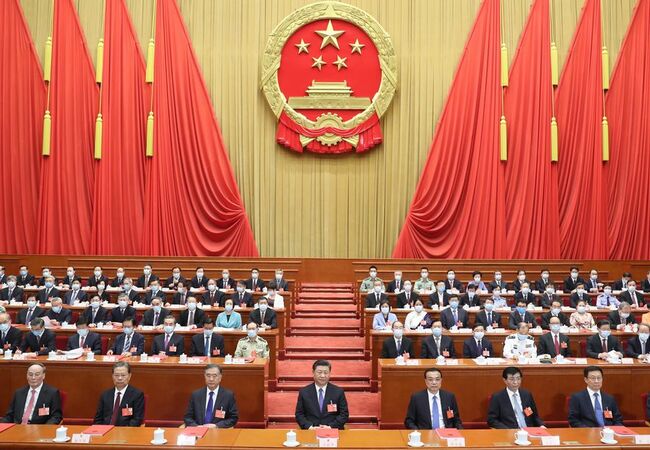 The closing meeting of the third session of the 13th National People's Congress (NPC) is held at the Great Hall of the People in Beijing, capital of China, May 28, 2020. XINHUA PHOTO

ENHANCING NATIONAL DEFENCE
When attending a plenary meeting of the delegation of the People's Liberation Army and People's Armed Police Force, Xi commended their role in battling COVID-19 and stressed achieving the targets and missions of strengthening the national defense and armed forces for 2020.
The epidemic has brought a profound impact on the global landscape and on China's security and development as well, he said.
He ordered the military to think about worst-case scenarios, scale up training and battle preparedness, promptly and effectively deal with all sorts of complex situations, and resolutely safeguard national sovereignty, security and development interests.
Noting that this year marks the end of the 13th five-year plan for military development, Xi said extraordinary measures must be taken to overcome the impact of the epidemic to ensure major tasks on the military building are achieved.