Woman weeps as police arrests hundreds of ...
Next Story

"All those who have contributed to this fund will be issued with certificates of appreciation for their devoted efforts towards the fight against the deadly pandemic,” Karooro said.

A modern washing tank by IUIU

"All those who have contributed to this fund will be issued with certificates of appreciation for their devoted efforts towards the fight against the deadly pandemic,” Karooro said.

KAMPALA - All people and organizations which have donated generously towards the fight against COVID-19 will be issued with certificates of appreciation, the general duties minister Mary Karooro Okurut has revealed.

Karooro, the political overseer of the fund who was flanked by Dorothy Kisaka, the Fund's administrator made the revelation on Thursday while receiving more donations from a number of organizations and individuals including Islamic University in Uganda (IUIU).

"We thank all people and organisations who have generously contributed whatever they have in response to President Yoweri Museveni's call to support the campaign against COVID-19.  All those who have contributed to this fund will be issued with certificates of appreciation for their devoted efforts towards the fight against the deadly pandemic," Karooro said.

Last Sunday, the chairman of the National Response Fund against COVID-19 Emmanuel Katongole disclosed that they had received donations worth sh28b.

He said the donations are from almost 600 entities, including private persons, businesses, NGOs, professional bodies, and public officers. 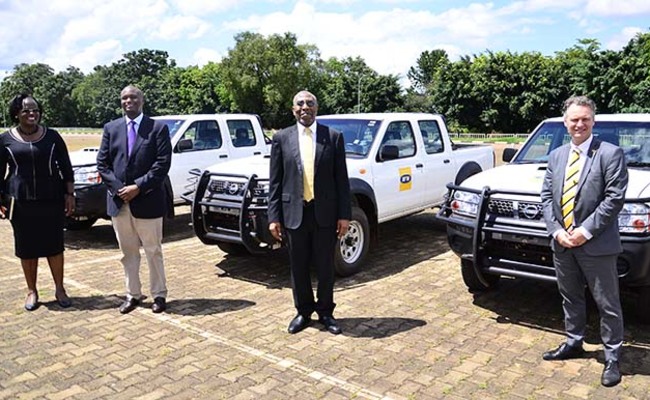 "Goods in kind so far donated are valued at sh13b and they include motor vehicles, food items, medical supplies, and non-food items," Katongole explained.

The leadership recently said they received a total of 59 vehicles valued at sh6.14b. They include 35 pickups, seven ambulances, and 17 others.

Last Tuesday, Katongole, disclosed that they have also received six more brand new pick-ups from various organizations and individuals. This brings the total number of vehicles donated to 65.

The Islamic University In Uganda (IUIU) on Friday donated five automated handwashing machine to the COVID-19 national task force to minimize the threat of contracting the virus.

The machines will benefit Entebbe grade B and Mulago National Referral Hospitals.

Dr Ahmed Kaweesa Ssengendo said they chose to donate the handwashing machines because it is a very important hygienic practice recommended by the Ministry of Health as well as the World Health Organisation in the fight against COVID-19.

"We believe that the above items will significantly contribute to the safety of our gallant health workers who are on the frontline in the fight against COVID-19 pandemic," Ssengendo said.

He explained that the machines use sensors that feel the body temperature of the user automatically and eject soap, and water in the hands of the user. One does not need one to turn up the water tap manually, thereby minimizing the spread of coronavirus which can last for over eight hours on the surface of the water tap.

The university also donated 250 pieces of re-usable transparent face shields for covering people's faces and 400 liters of sanitizers, which were also manufactured by students of IUIU in the department of Pharmacology led by Dr Sulaman Ademula. 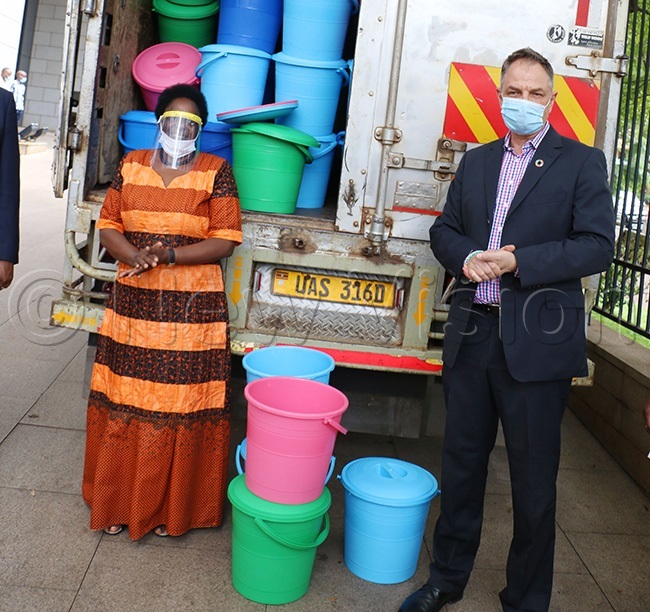 UNFPA donated 4,000 buckets, each of the buckets was packed with sanitary pads, soap sanitizers, to be given to 4000 households for women and teenage girls

Ssengendo revealed that the items are worth sh37m.  Karooro lauded IUIU for the unique donation, which she said was in line with Buy Uganda Build Uganda (BUBU) since they were locally manufactured.

Washing of hands with soap is one of the many precautionary measures initiated by the government to control the spread of coronavirus.

Many people have since complied with it despite a risk of contact with potentiality infected tap surfaces during the process of handwashing, particularly in public places.

Also an 11-year-old Samantha Umuhimbise donated sh15, 000 towards the cause.  Umuhimbise is a primary six pupil of City Parents School.

Alain Sibenale, the United Nations Population Fund (UNFPA) representative to Uganda donated 4,000 buckets. Each of the buckets was packed with sanitary pads, soap sanitizers, to be given to 4000, households for women and teenage girls.

The Minister of Presidency Esther Mbayo also handed in sh13m which she said was contributed by a section of Resident District Commissioners.