Officers sacked in US after black man dies...
Next Story

On April 6, bodies are moved to a refrigeration truck serving as a temporary morgue at Wyckoff Hospital in the Borough of Brooklyn in New York. (AFP)

Unthinkable just four months ago, the United States on Wednesday surpassed the grim milestone of 100,000 coronavirus deaths, as the pandemic tightened its grip on Latin America. 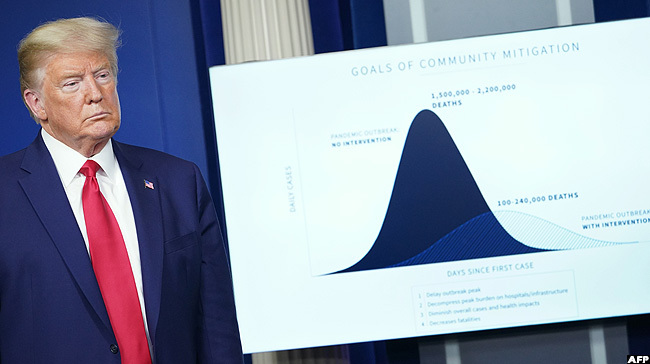 With the European Union unveiling a massive recovery plan to step up its emergence from the crisis, the catastrophic US figure was a reminder of the devastation being wreaked across the ocean all over the hard-hit Americas.

Confirmed US deaths just before 2200 GMT stood at 100,047, with 1.69 million infections, according to the tally compiled by Johns Hopkins University.

US House Speaker Nancy Pelosi paused during a news conference to note the staggering toll of the "villainous virus," even as states cautiously re-open their shuttered, devastated economies.

"Little did we know we would be coming here almost at the exact time when our country would be registering 100,000 people dying from the coronavirus," Pelosi said.

"To those hurting, I'm so sorry for your loss," the former vice president said via tweet. "The nation grieves with you." 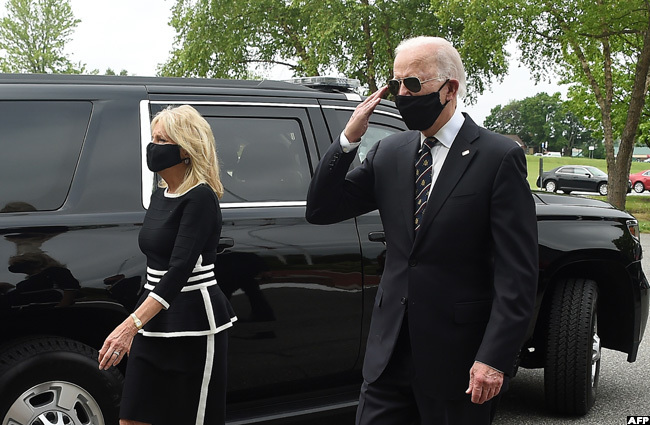 While many Western nations are creeping back toward some form of normality, the virus has continued its march in Latin America, which is outpacing Europe and the US in daily infections.

"We are particularly concerned that the number of new cases reported last week in Brazil was the highest for a seven-day period since the outbreak began," said Carissa Etienne, director of the Washington-based Pan American Health Organization.

"Both Peru and Chile are also reporting a high incidence, a sign that transmission is still accelerating in these countries."

Brazil reported the highest daily deaths in the world for the fifth straight day, pushing its toll to 24,512, with infections soaring to more than 390,000. 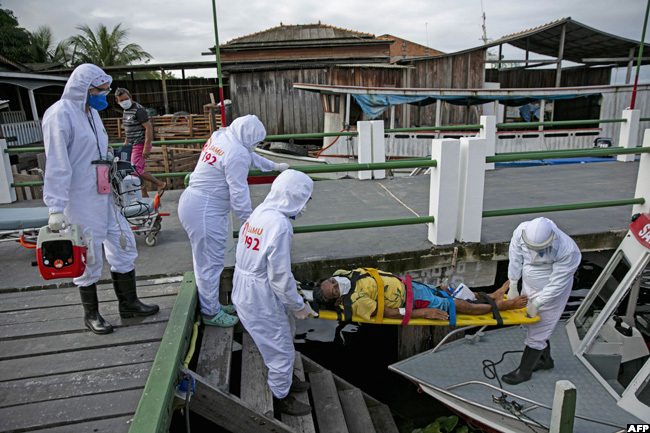 Health personnel carry a man infected with the new coronavirus on a stretcher to be transferred on an ambulance boat from the community of Portel to a hospital in Breves, on Marajo island, Para state, Brazil

The virus is also fueling a political crisis in Brazil, where right-wing president Jair Bolsonaro has downplayed the threat and lashed out at state governors who have asked people to stay home.

The EU unveiled a historic, 750-billion-euro ($825-billion) recovery plan to get the continent back on its feet.

It follows other unprecedented emergency measures introduced around the world to rescue economies shattered by the disease, which has claimed more than 353,000 lives as infections top 5.6 million.

"We either all go it alone, leaving countries, regions and people behind... or we walk that road together." 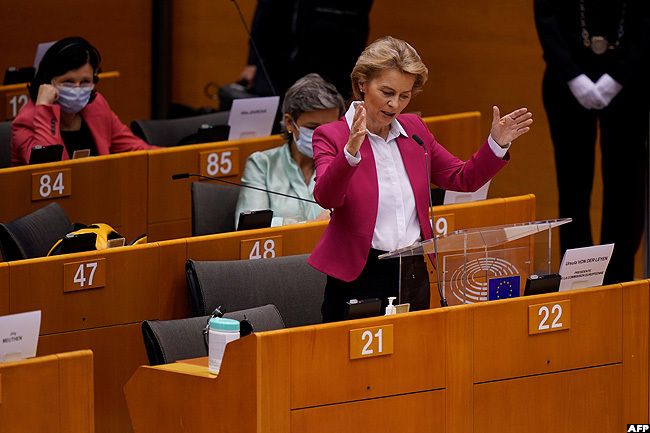 The proposed package is expected to kick off tough negotiations, as backers try to win the support of some northern EU states that oppose paying out grants to nations already under mountains of debt.

The proposal comes as the continent -- which has lost at least 173,000 people to COVID-19 -- grapples with the human tragedy and economic destruction.

Spain on Wednesday began 10 days of official mourning for the more than 27,000 people who died in the country, with all flags on public buildings at half-mast.

The Iberian nation and others hit particularly hard, including Italy, Germany, France and Britain, have started easing their lockdowns, as people head to shops, sunbathe at beaches and run in parks after months of confinement.

While desperate to kickstart their economies, especially the tourism sector, most governments in Europe are also trying to move cautiously, afraid of a second wave of infections.

In Cyprus the badly-hit tourism sector inched back to life as beaches opened again -- but with sunbeds and parasols spaced apart to avoid crowding. 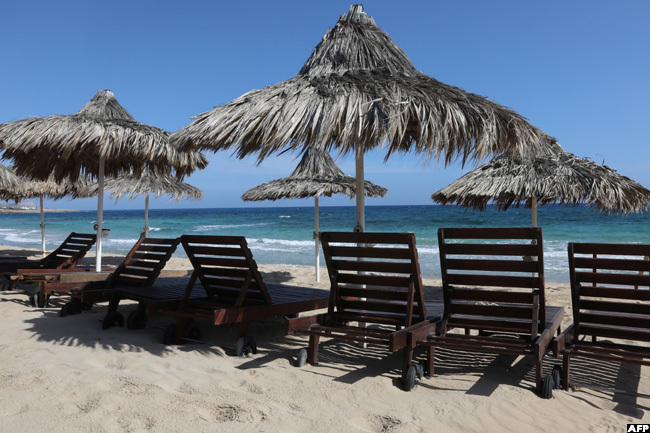 Empty sunbeds along a beach in the Cypriot resort town of Ayia Napa on May 4, as the island country gradually eased lockdown restrictions

In a bid to attract tourists, the government said it would pay the medical costs of anyone who tests positive for the virus while holidaying on the island.

Elsewhere in Europe there were confident signs of a return to normal. Poland scrapped a rule calling for face masks in public, while Switzerland said it would drop its virus restrictions by June 6.

In Moscow, shops will reopen and people will be allowed out for walks from June as the Russian capital announced the easing of its lockdown.

"Today we can already talk about the next steps out of the crisis situation," Moscow Mayor Sergei Sobyanin said, after the country passed its peak of infections. 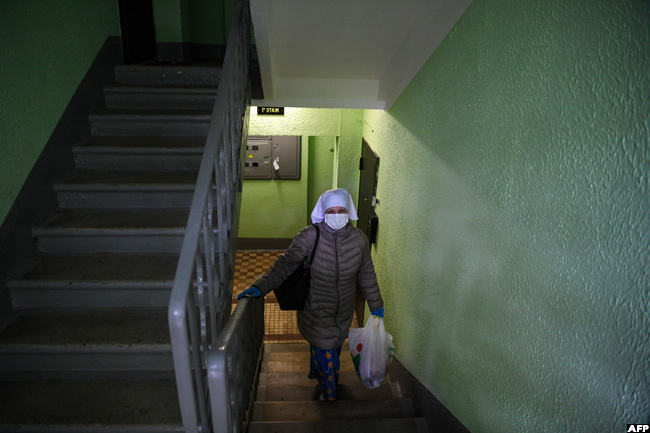 Nurse Ivanna Banshchikova, 51, arrives to visit a patient at home in Moscow on May 16 amid the COVID-19 outbreak

The United States remains the hardest-hit nation, with President Donald Trump weathering heavy criticism for his handling of the crisis -- and for not wearing a mask in public despite his administration's recommendations.

Trump's principal preoccupation has been for a quick turnaround of the badly battered US economy, and he has pressured local and state leaders to ease lockdowns.

Trump courted controversy this month when he said he was taking the anti-malaria drug hydroxychloroquine as a preventative measure against coronavirus.

France said Wednesday it was banning the drug as a COVID-19 treatment, following a similar decision by the World Health Organization amid fears over dangerous side effects. 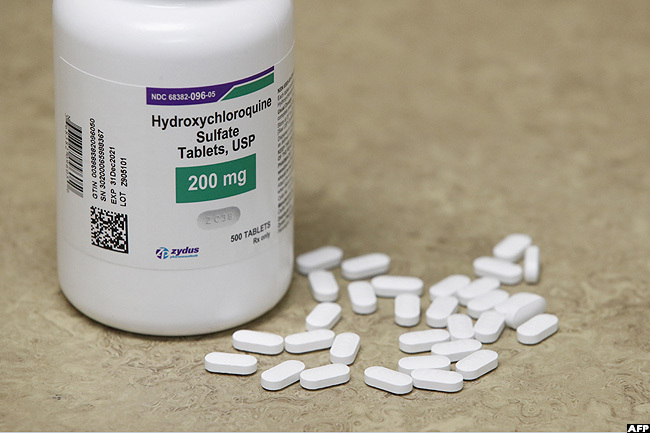 Even with some positive economic signs in countries like France, the International Labour Organization warned of the global fallout among young workers who have lost jobs because of the pandemic, a cohort it dubbed the "lockdown generation".

"As we recover from the pandemic, a lot of young people are simply going to be left behind. Big numbers," said ILO chief Guy Ryder.

The agency estimates that one in six people under the age of 29 have been forced out of work because of the crisis -- and that the impact could last "a decade or longer".

Fresh tragedy struck meanwhile in Asia on Thursday, as five people were killed in a Bangladesh hospital after a fire swept through a makeshift coronavirus isolation unit.

Bed-wetting: Are you an adult suffering silently?

You can train baby not to bed-wet

Help! My husband wets the bed