"I never thought I would ever have to work on the front line in a pandemic. I do wish it was just a dream and when I wake up the world will be back to how it was."

Stress and anxiety brought on by dealing with the high levels of serious illness and death have become commonplace on the medical frontlines. AFP/File / JOEL SAGET

"I never thought I would ever have to work on the front line in a pandemic. I do wish it was just a dream and when I wake up the world will be back to how it was."

COVID-19 | MENTAL HEALTH | MEDICS
Steve, a paramedic in northeast England, contracted the coronavirus two months ago. Then his wife fell ill. Both recovered but throughout they were concerned about passing it on to their two young sons.
"On my return to work, I couldn't sleep properly, as I was worried that I could still bring the virus home and that I could still get it again," the 46-year-old told AFP.
"I never thought I would ever have to work on the front line in a pandemic. I do wish it was just a dream and when I wake up the world will be back to how it was."
Doctors, nurses and paramedics in full protective clothing have become an enduring image of the pandemic.
But stress and anxiety brought on by dealing with the high levels of serious illness and death have become commonplace on the medical frontline.
Now, professional bodies and experts in Europe's worst-hit countries want more support to tackle the psychological impact on staff -- particularly if a second wave strikes.
"We've got all the ingredients for a major risk of post-traumatic stress disorder," said Belgian mental health expert Xavier Noel.
Noel, a clinical psychologist in Brussels, singled out nurses as of most concern, given their proximity to seriously ill patients and the dying.
"They've faced a totally unusual death rate and way of dying, in a more dehumanised context, without the presence of families to support them," he said. 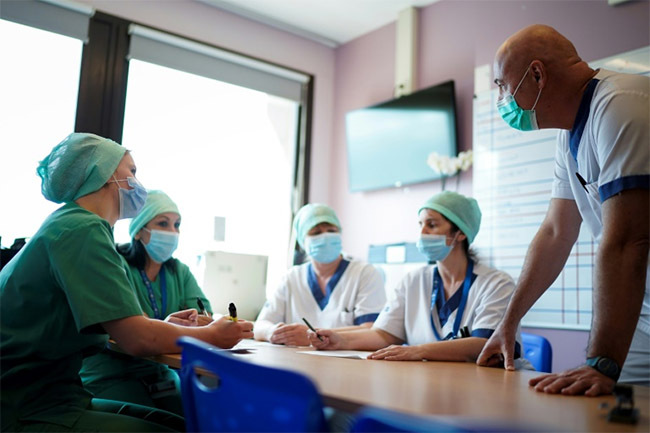 Stress levels have reached such levels in Belgium that the number of healthcare workers thinking about quitting is more than double the usual. AFP / Kenzo TRIBOUILLARD

Europe has officially seen nearly 175,000 deaths from more than two million cases, and across the continent the battle to save lives has taken a punishing toll.
In Belgium, studies indicated that more than twice as many healthcare workers than usual had thought about quitting the profession, and levels of unhappiness were four times higher.
Another found alcohol consumption highest among healthcare professionals.
In France, one healthcare workers' support association said it was receiving more than 70 calls a day from medics about the crisis.
Some seven in 10 were from women and a handful of calls were even deemed to indicate "an imminent risk of suicide".
In Spain, more than 50,000 healthcare workers have tested positive for COVID-19 -- 22 percent of the total cases in the country, according to the health ministry.
Anxiety is rife, a study by Complutense University of Madrid found, adding that just over half of the 1,200 medics it questioned had "depressive symptoms".
A similar number (53 percent) showed signs "compatible with post-traumatic stress", the study said.
"We believe an urgent psychological intervention is necessary for this group if the much-feared second wave materialises," said the report's authors, Lourdes Luceno Moreno and Jesus Martin Garcia.
"We are going to see professionals emotionally damaged and a health system without the capacity to respond."
The Catholic University of the Sacred Heart in Milan similarly found seven in 10 healthcare professionals in the worst-hit regions of Italy were exhausted.
Nine in 10 had suffered psychological stress. Many reported increased irritability, trouble sleeping and night terrors, as well as emotional breakdowns.
Researcher Serena Barello said the normal stresses of the job had been exacerbated by the increased workload, difficult working conditions and the raft of unknowns about the virus.
That had put their health "seriously at risk, not just physically but also emotionally and psychologically", she added.
'Hero' label adds pressure

In the UK -- whose death toll is second only to that of the United States -- the country's only charity offering mental health support for first responders is also warning of a looming crisis.
The Laura Hyde Foundation, set up in memory of a nurse who took her own life in 2016, said it had been inundated with calls from nurses, doctors and paramedics.
Last week, it launched a "No Mask for Mental Health" campaign to raise awareness of the psychological impact of the outbreak and provide support.
"Healthcare staff everywhere have been really touched by all the love they've been getting from the public," said Jennifer Hawkins, clinical lead at the foundation.
"But the label 'hero' can, at times, put them under even greater pressure.
"The harsh reality of their work is having a significant impact on mental health -- and we must make it OK for medical professionals not to suffer in silence; to prescribe for themselves what they would prescribe for others and ask for help," Hawkins said.