Patrick Kyabire, Abdu Mpiira, David Maganda and Moses Kabuze forcefully removed the four suspects from a police cell and burnt them to death.

The entrance to the Luzira Upper Prison in Kampala. (File photo)

Patrick Kyabire, Abdu Mpiira, David Maganda and Moses Kabuze forcefully removed the four suspects from a police cell and burnt them to death.

In the morning of October 19, 2000, Paul Kigoli's body was found by the roadside near the home of Eseza Namusobya, a local potent gin seller. The previous evening Kigoli had been drinking in company of Fred Mawulira, Moses Mubezi, and David Swaga.

When Kigoli's death was reported to the Police, they arrested Namusobya and Kigoli's drinking mates and locked them up in the cells.

They reportedly took Eseza Namusobya to her hut, locked her inside and set it ablaze, burning her to ashes. After that, they hacked Fred Mawulira, Moses Mubezi and David Swaga to death and burnt their bodies as well.

Justice Yorokamu Bamwine on June 24, 2002, convicted them on four counts of murder and sentenced each of them to suffer death.

However, the convicts appealed at the Court of Appeal, reasoning that the sentence was harsh and excessive but their appeal was dismissed. 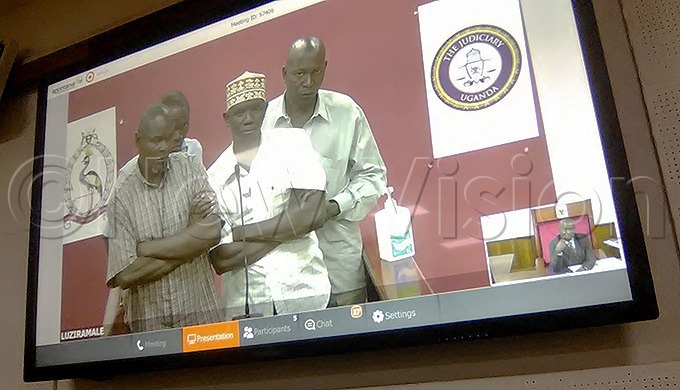 The four were sentenced to death for murdering four people whom they suspected of having poisoned Paul Kigoli, a resident of Kamuli district. (Photo by Michael Odeng)

Recently, the five Justices of the Supreme Court led by Justice Dr Esther Kisaakye also dismissed their claim, stating that the offence was committed by way of mob justice. Other justices on the panel were Arach-Amoko, Eldad Mwangusya, Opio Aweri and Richard Buteera.

The Supreme Court Acting Registrar Lawrence Tweyanze on Thursday, May 21, 2020, delivered the judgement through video conference at Buganda Road Court in Kampala.

"We are in total agreement with the Court of Appeal that the gravity of the offence justifies the imposition of the maximum sentence on the appellants, Kisaakye ruled.

"We do not consider this an appropriate case where this court should interfere with the sentence by the Court of Appeal. We accordingly dismiss the appeal and uphold the death sentence on each of the appellants," the court ruled.

The justices ruled that the six eyewitnesses properly identified the convicts as having participated in the heinous crime with a common intention of killing the deceased persons.

"The accused persons were known to the witnesses prior to the time of the offence. The killings were carried out in broad daylight, around 10:00am under the watchful eyes of the community," Kisaakye noted.

According to the justices, the incident was very traumatizing to the community especially for one of the mothers of the deceased, who fainted when the convicts were burning her son to death.