Bayern Munich were in control, and Joshua Kimmich grabbed what proved to be the winner two minutes before half-time.

Bayern Munich were in control, and Joshua Kimmich grabbed what proved to be the winner two minutes before half-time.


Joshua Kimmich described his winning goal as "brutally important" after Bayern Munich took a huge step towards an eighth straight Bundesliga title on Tuesday with a 1-0 win at Borussia Dortmund to leave them seven points clear at the top with just six games left.

Kimmich's brilliant effort came just before half-time behind closed doors at Signal Iduna Park as hosts Dortmund missed the chance to turn up the heat on the Bavarians without the backing of their huge support.

"It was brutally important: I looked around to see if everyone understood how important it was," Kimmich said of his deft chip.

Bayern won 4-0 when the teams met in Munich in November and they kept up their excellent recent record in the 'Klassiker', even if this was a much tighter contest.

"Sometimes, games are decided by brilliant moments and that was the case today."

Dortmund's star teenage striker, Erling Braut Haaland, who had scored ten goals in as many league games, failed to make an impact against Bayern's watertight defence before going off injured in the second half.

Jerome Boateng and David Alaba gave him no room, while Kimmich and Leon Goretzka in midfield made sure passes intended for him rarely met their mark. The Norway forward limped off with 20 minutes left after a heavy tackle from Boateng.

The result means that 11 of the 19 games played since the Bundesliga returned behind closed doors following the coronavirus shutdown have been won by the away team. 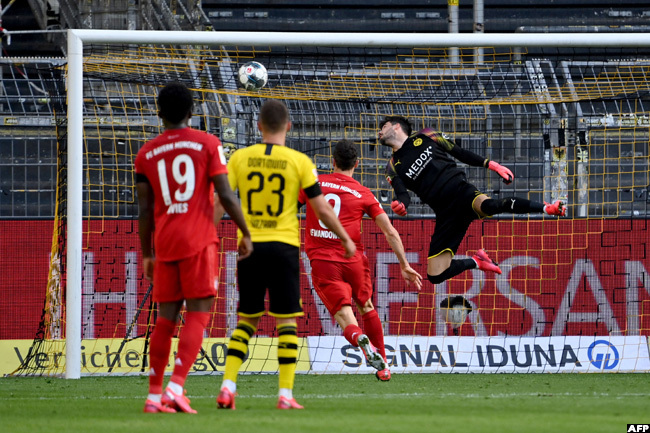 Things might have been different, with Haaland coming close inside the first minute with an audacious attempt through the legs of Bayern goalkeeper Manuel Neuer which was cleared off the line by Boateng.

Bayern were in control, and Kimmich grabbed what proved to be the winner two minutes before half-time when he spotted Buerki off his line and chipped in from 20 yards.

It was the Germany international's third league goal from outside the box this season.

In an attempt to turn the game around, Dortmund coach Lucien Favre brought on midfield enforcer Emre Can at the start of the second half and added the pace of Jadon Sancho on the wing.

The home side had a shout for a penalty just before the hour mark when a Haaland shot was deflected wide by the arm of Boateng, but nothing was given.

Shortly after, Haaland limped off to be replaced by 17-year-old Giovanni Reyna.

In the dying stages, Favre brought on 2014 World Cup winner Mario Goetze, who is out of contract next month and set to leave, in the vain hope of grabbing an equaliser.

The league's top scorer then had a strong appeal for a late penalty waved away after a push in the area by Dortmund defender Manuel Akanji.

But the roars of celebration at the end came from the Bayern bench and echoed around the near-empty stadium. Former German goalkeeper and member of the Board of Management of FC Bayern Munich, Oliver Kahn, watched the match 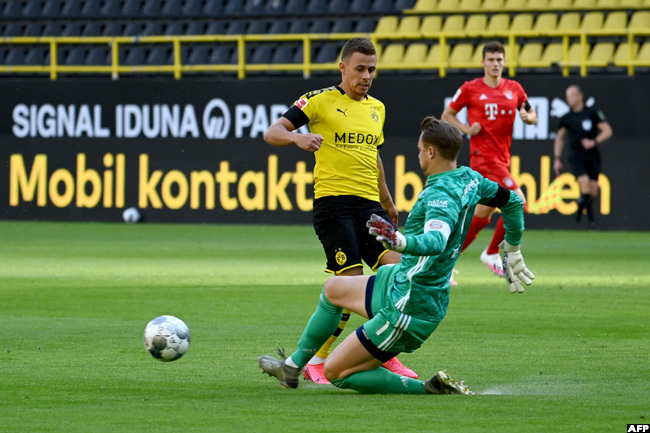 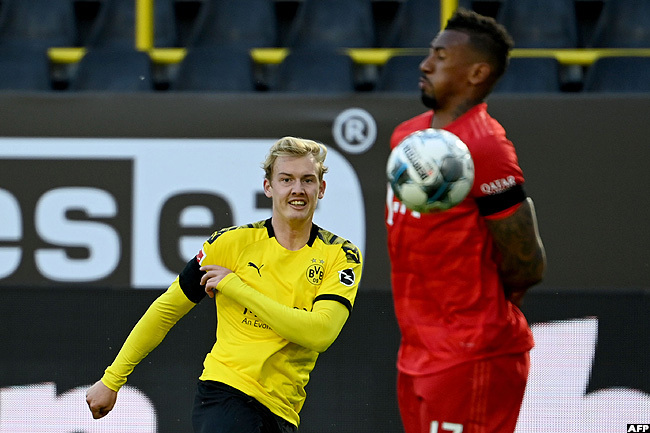 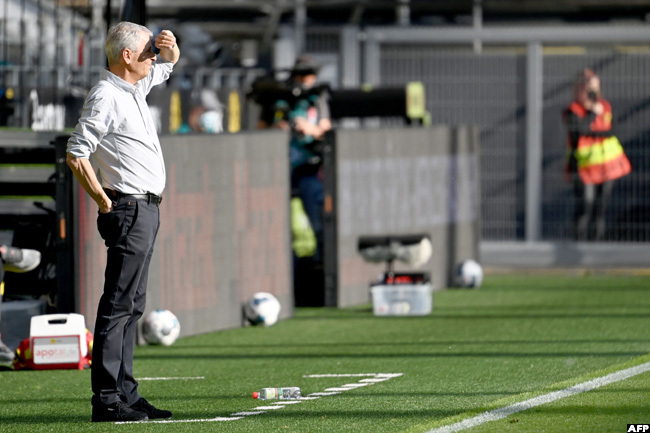 On a hot evening, Dortmund's Swiss coach Lucien Favre had to shield his eyes from the sun as he followed the game on the sideline 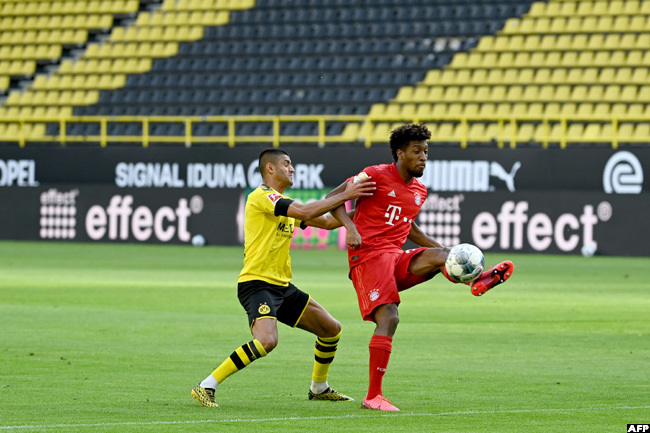 Bayern's French forward Kingsley Coman (R) and Dortmund's German midfielder Mahmoud Dahoud vied for the ball. Coman provided the assist for the only goal of the match 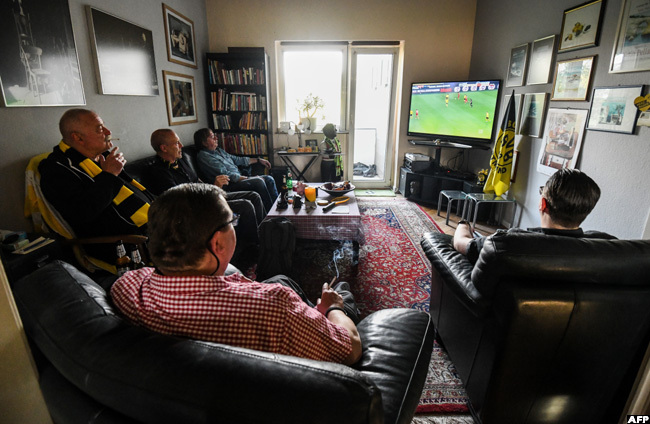 Supporters of Borussia Dortmund followed the match at their home in Dortmund, western Germany 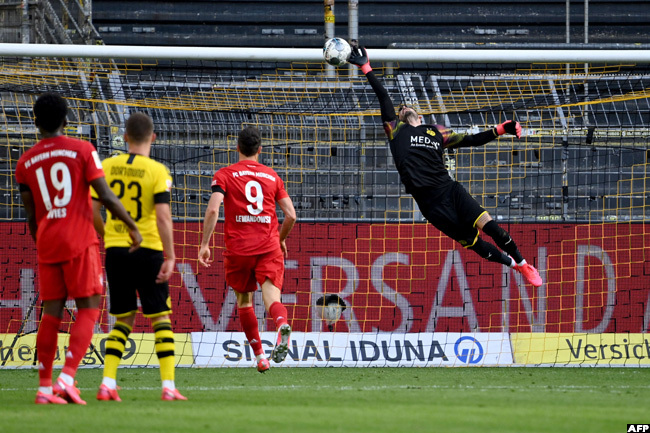 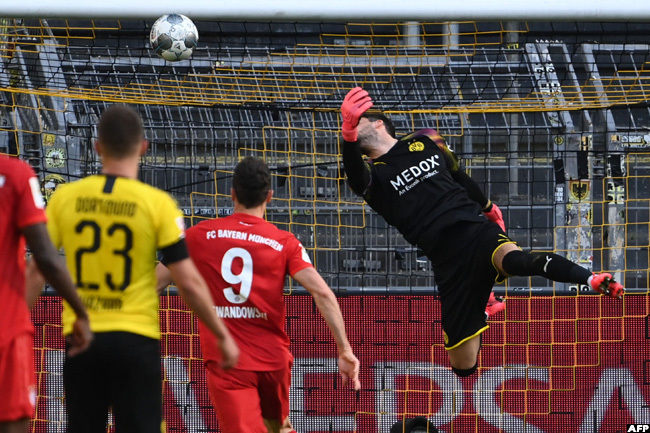 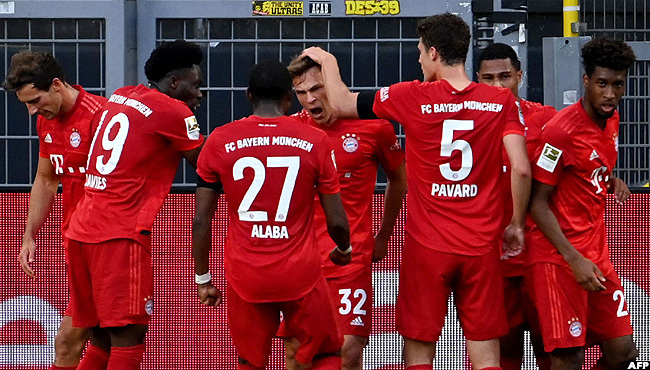 This is how Bayern players celebrated with goalscorer Joshua Kimmich 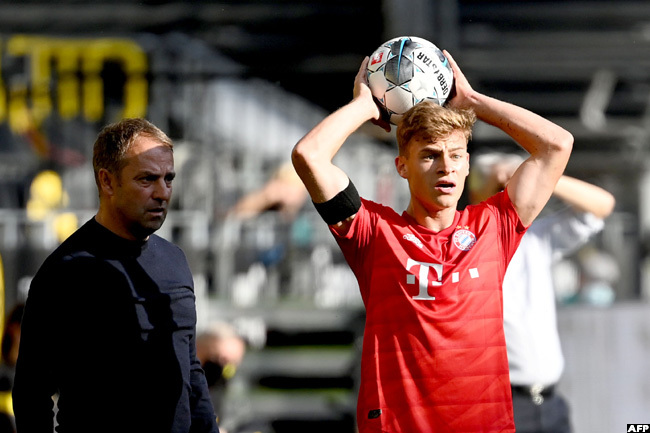 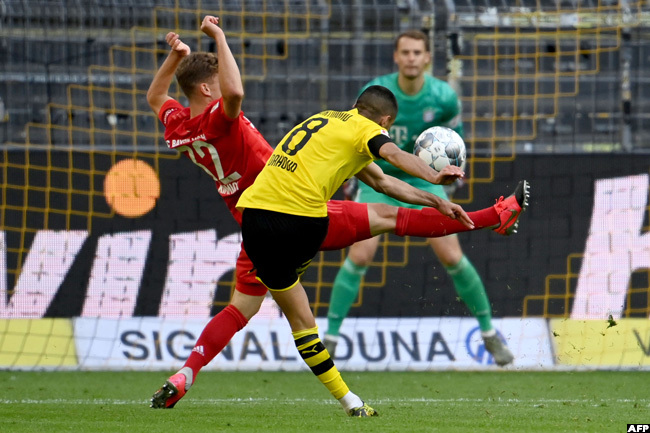 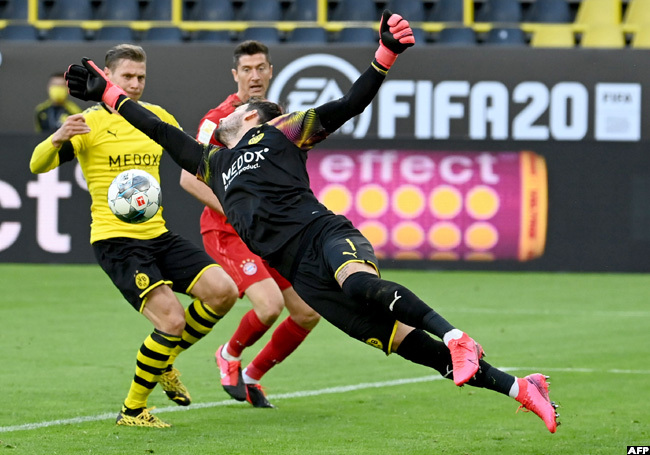 Dortmund's Swiss goalkeeper Roman Buerki was drawn into this save