Impact of COVID-19 on private sector, agri...
Next Story

The Minister blamed the rise in the water levels saying that it has detached large chunks of land and vegetation from the mainland in various parts of the country.

An excavator belonging to Ministry of Agriculture and Animal Industry and Fisheries shredding part of a floating island that was threatening to block Portbell.

The Minister blamed the rise in the water levels saying that it has detached large chunks of land and vegetation from the mainland in various parts of the country.

KAMPALA - It was a rainy morning on Tuesday but this did not stop the work against the floating island that was threatening to block Portbell and Luzira landing site in Kampala. The team from government led by officials from the Ministry of Agriculture deployed two excavators that were anchored in Lake Victoria on two ferries.

This took place about a kilometer away from Portbell where the floating island was intercepted by a team of government officials led by Ministry of Agriculture.

"We have had a lot of trouble with the floating islands," said Abdul Semweru, a coxswain at Portbell, adding that fishermen could not go to work for days as Luzira landing site would remain blocked for days. "It is good that government has come to our rescue and got rid of the suds."

He added, "We had complained for some time but government did not respond to outcry. It is only recently that the floating islands were threatening to block the dam that Government came up with a solution."

The State Minister for Fisheries, Hellen Adoa who presided over the press conference which was called to give an update on the work against the weed at Portbell said they had deployed excavators at Jinja and Portbell. She said they were steadily moving to eliminate the threat.

The technical team that has been working to restore the lake started on April 15th, according to Adoa.

The Minister blamed the rise in the water levels saying that it has detached large chunks of land and vegetation from the mainland in various parts of the country close to the lakes.

"These chunks of land and vegetation, which are referred to as suds, started to move on the surface of the lakes in the second week of April, with one 12-acre island reaching the Nalubaale Power Station in Jinja and causing a countrywide power blackout," she said. 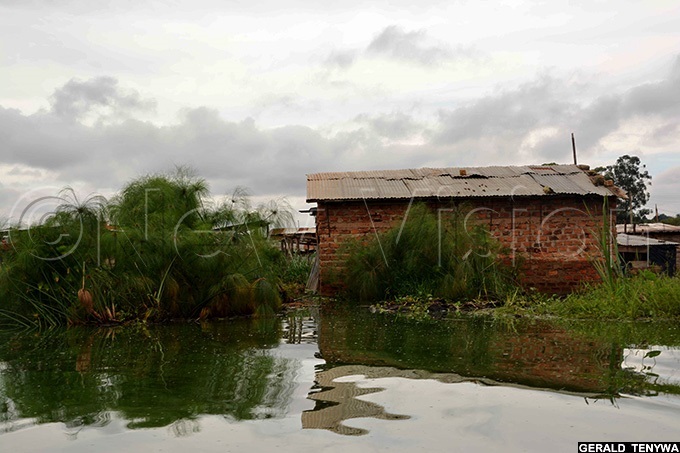 A flooded house that has been abandoned by residents at Portbell.

There are also other problem areas where many floating islands are roaming and these include Bunjako Bay in Mpigi and Kalungu, Sango Bay and River Kagera (Kyotera), and Fielding and Thruston Bays in Jinja and Mayuga). This poses a threat to the dam, according to Adoa.

Apart from Lake Victoria, a bigger challenge still lies ahead on Lake Kyoga already affected with many heavy floating weed mats including the Kariba weed, according to Adoa.

The Ministry of Agriculture, Animal Industry and Fisheries is working with other stakeholders to undertake surveillance and monitoring on Kyoga to ascertain the current abundance and distribution of weed mats with the aim of unblocking and dredging the lake in the near future.

She also pointed out that the equipment on Kyoga (that is at the Kokooge and Moone landing sites) is to be fully maintained and operationalized to harvest the suds as was the case in the blockage that was experienced between 1998 and 2000.

Pius Wakabi, the Permanent Secretary in the Ministry of Water and Environment who accompanied a team of media professionals to the dredging site of the sud said they had split the floating island into three parts. He said they were getting rid of the floating islands in Murchison Bay because they would move faster once they get into Kagera Channel to Jinja.

Solomon Kalema, the senior knowledge management officer at the agriculture ministry, on Monday said they had cleared about half of the floating wetlands at Murchison Bay.

Are your MPâ€™s views your own?