Adjusting to the new normal amidst COVID-19
Next Story

Officials from EPHWOR give out birth control pills to a woman in Buhweju district. (Credit: Fredrick Mugira)

When Uganda's President Yoweri Museveni extended the nationwide lockdown to halt the spread of the coronavirus for 21 days in April, Birungi Joyce, a housewife in Kacerere, Bisya, in Uganda's hilly district of Buhweju, felt a boom of uncertainty.

The birth control pills she takes by mouth every day to prevent pregnancy were finished. Birungi had thought that after the initial 14-day lockdown, she would travel - almost 30 kilometers from her home on a commercial motorcycle - to purchase more pills at her usual pharmacy, but alas, the lockdown was extended for three weeks.

The only alternative she was left with was to abstain. But her husband was unwilling.

"He would sometimes beat me for denying him sex," narrates Birungi. "But I persevered. This was better than conceiving."

Birungi, aged 35, says they have been struggling to fend for their five children and could not afford to add on another.

Indeterminate of what else to do, she sought advice from some women in her village who advised her to call officials of EPHWOR, a women-led non-governmental organization, for help.

The women had watched officials of this organisation speaking on a local television. Fortunately, they had noted down their telephone contacts.

Eventually, Birungi called the organisation. A day after her call, officials from EPHWOR drove to her village and gave her birth control pills to last her two months.

If Birungi had not received this help, she would probably be carrying an unintended pregnancy, putting her among the, "seven million unintended pregnancies," that the UN population agency UNFPA, "expects to occur," if the current, "lockdown continues for six months and there are major service disruptions due to COVID-19".

But now, she is part of the 300 women from eight districts in southwestern Uganda that EPHWOR (Enforcement of Patients and Health Workers' Rights Uganda) has saved from unintended pregnancies during the COVID-19 lockdown.

The women are from the districts of Mbarara, Ibanda, Buhweju, Sheema, Isingiro, Rwampara, Kiruhura and Kazo.

EPHWOR started in 2017. It has been implementing programmes aimed at enforcement of rights and advocacy of women, sexual and reproductive health and rights, and patients' rights in rural and urban areas of Uganda.

Dr. Aruho Amon Kategaya, the medical and reproductive health consultant at EPHWOR, says this initiative, "will prevent women from conceiving children by chance as Uganda makes important strides in the contraceptive prevalence rate".

Women and adolescent girls enrolled on family planning methods in Uganda and several developing countries are finding it hard to access contraceptives following the COVID-19 lockdown. This was worsened by the ban on local transport means, leaving many of them unable to walk dozens of kilometers to health centres, clinics, and pharmacies to get contraceptives.

The situation also was worsened by the countrywide closure of family planning outreaches that Reproductive Health Uganda (RHU) has been providing following the outbreak of the Novel coronavirus.

Dr. Kenneth Buyinza Clinic, the services manager for RHU, told New Vision recently that they had to suspend all outreaches because they could not "observe the four-metre social distancing with the large clientele" they have.

Dr. Therestine Barigye, the director of Mbarara Regional Referral Hospital, says although some mothers still come to the hospital to access family planning services, lack of transport means to access health centres and hospital could be affecting "several women and girls", putting them at risk of getting "extra children".
"You can call it a baby boom because now people (couples) are at home. You can imagine what happens as they live together," says Dr. Barigye.

He predicts a spike in the number of babies born in the southwestern region nine months from now following the COVID-19 lockdown. Uganda's 2020 fertility rate stands at 4.78 births per woman.

Last month, the Archbishop of the Church of Uganda, Stephen Kaziimba Mugalu, cautioned women that they could get pregnant in the lockdown and tipped them not to forget to use contraceptives.

"These guys are there; they are eating and doing things. Be careful," noted the Archbishop as he preached on national television from his home in Kampala. 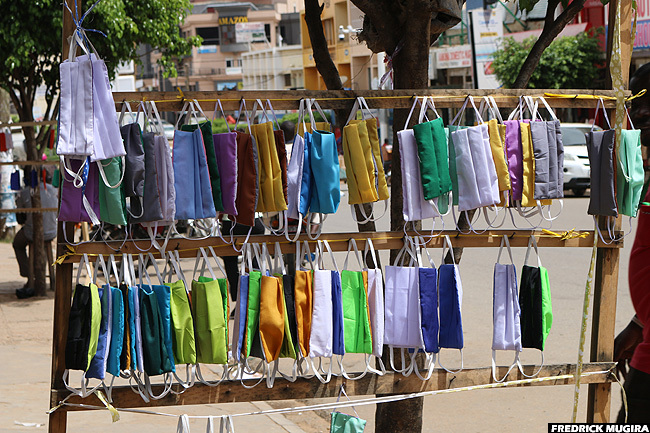 A burden on few resources families have

An additional child to a family, especially born by chance, strains the family's resources just like how population increase leads to negative impacts on national resources.

Wilson Twamuhabwa Kadidi, the economic advisor to the finance minister, says the increase in especially unproductive population is "a burden on the few resources that governments or families have".

"Population increase puts a lot of strain on resources because governments or families have to plan for those people who have been added on the population," he says.

The condition is even worse in rural Uganda, where most women rely on family planning to mitigate the effects of poverty when faced with a big family.

EPHWOR is not only offering free family planning services to the women. According to Dr. Aruho, it is also engaged in "monthly refills for ARVs, cancer drugs and other medication to vulnerable women and girls in these eight districts".

For other drugs hard to get in public health centres and hospitals, the organisation buys them using its own money and ensures timely delivery to women in need.

Dr. Aruho laments that people with chronic diseases including cancer, HIV/AIDS, diabetes, and others that need periodic refills for drugs have been neglected in the country during this COVID-19 lockdown.

During the now two-month lockdown, the organisation has helped 40 women access free HIV/AIDS drugs. 100 other women have been helped to access free diabetic and hypertension drugs. They have also offered over 1500 kilogrammes of maize flour to some women who are not able to find what to eat. Over sh10m ($2700) has been spent on this initiative by the organisation.

Dr. Aruho says there can never be an opportune moment to help these rural women like this time.

Only 20% of Uganda's milk is processed