Floating island cuts off Moyo from Adjumani
Next Story

About 100 residents of Lokameta village reportedly ran and took refuge at the home of the LC2 chairperson of Oburatum parish, Moses Elungat.

About 100 residents of Lokameta village reportedly ran and took refuge at the home of the LC2 chairperson of Oburatum parish, Moses Elungat.

Close to 100 people of Lokameta village in Poro sub-county in Napak district have been displaced following fresh clashes that erupted between the Iteso and Karimojong over Katakwi/Napak border.
The communities have had a border conflict for several decades. However, the fight is now shifting to the contested land between the newly-created Poron sub-county in Napak and Ongongoja sub-county in Katakwi.
About 100 residents of Lokameta village reportedly ran and took refuge at the home of the LC2 chairperson of Oburatum parish, Moses Elungat.
Elungat said he had children, women and men as well as their animals and property accommodated in his compound for a night.
The distance from Lokameta village in Poron (Karamoja) and Oburatum village in Ongongoja (Teso) is around 100 meters.
Andrew Ochen, the LC1 vice-chairperson for Lokameta village, said a number of Iteso from the districts of Serere, Amuria and Kumi had acquired land in Okameta village years ago, thinking that it was part of Teso.
Ochen said the Karimojong tribesmen were now chasing them away after the Government declared that Lokameta village is part of Karamoja.
"These people are demarcating and ploughing our land, claiming that it belongs to them and besides, they threaten our lives," he said.
Joyce Ikwapit, a resident of Lokameta village who hails from Serere, said the Karimojong kept increasing in number in their area until they started threatening them with spears and machetes.
Anna Stella Amongin, also a resident in the village, said the Karimojong tribesmen almost beat her after learning that her husband whom they were looking for was not at home.
According to Amongin, the attackers beat Emmanuel Eteu and Adepo and warned that they would return at night.
Michael Ongica, the Napak District Police Commander, said the confusion had been sparked by three locals from Teso and Karamoja who were fighting over two small pieces of land, a matter he said had even reached Court.
"Those few people want confusion and recognition but we are waiting to arrest and prosecute whoever will commit a crime among them," the DPC said.
Katakwi deputy Resident District Commissioner Vincent Enomu said the Karimojong tribesmen started demarcating the land occupied by Iteso in Lokameta on Saturday, beat up people and torched several houses in the area. 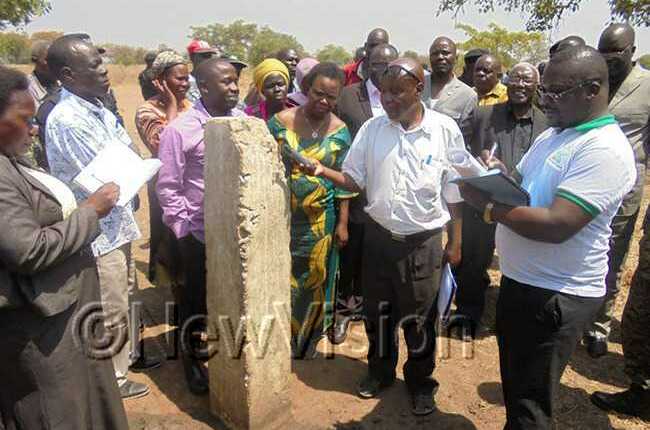 Officials at the border point between Katakwi and Napak. Photo by Emmanuel Alomu

In February 2019, the then Minister of Local Government, Tom Butime, made a final verdict on the Napak and Katakwi districts border conflict that had taken decades without being solved.
The minister directed that no person would be evicted from any land but those curved under Katakwi were asked to pay allegiance to that district administration where the boundary finds them and vice versa.
Butime asked the resident district commissioners, District police commanders and chief administrative officers of the two districts  to recognise their boundaries and take charge of the areas within their boundaries.