Further dampening the festive spirit, many countries from Saudi Arabia to Egypt, Turkey and Syria banned mass prayer gatherings to limit the spread of the disease.

Further dampening the festive spirit, many countries from Saudi Arabia to Egypt, Turkey and Syria banned mass prayer gatherings to limit the spread of the disease.

Muslims around the world began marking a sombre Eid al-Fitr Sunday, many under coronavirus lockdown, but lax restrictions offered respite to worshippers in some countries despite fears of skyrocketing infections.

The three-day festival, which marks the end of the holy month of Ramadan, is traditionally celebrated with mosque prayers, family feasts and shopping for new clothes, gifts and sweet treats.

But this year, the celebration is overshadowed by the fast-spreading coronavirus, with many countries tightening lockdown restrictions after a partial easing during Ramadan led to a sharp spike in infections. 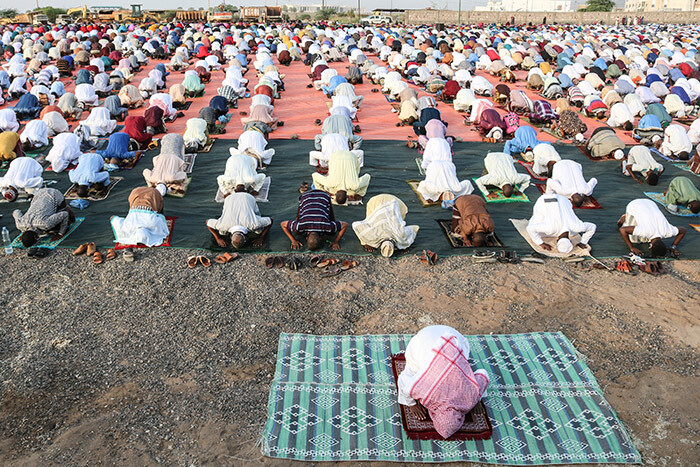 Further dampening the festive spirit, many countries from Saudi Arabia to Egypt, Turkey and Syria have banned mass prayer gatherings to limit the spread of the disease.

Saudi Arabia, home to Islam's holiest sites, began a five-day round-the-clock curfew from Saturday after infections more than quadrupled since the start of Ramadan to over 70,000 -- the highest in the Gulf.

Mecca's Grand Mosque has been almost devoid of worshippers since March, with a stunning emptiness enveloping the sacred Kaaba -- the large cube-shaped structure towards which Muslims around the world pray.

But on Sunday, an imam stood on a podium while Saudi security forces, some wearing masks, positioned themselves between rows of worshippers who gathered before the Kaaba for Eid prayers.

At Jerusalem's Al-Aqsa mosque, Islam's third-holiest site after Mecca and Medina, prayers were not permitted inside, although the site is expected to reopen after the Eid holiday. 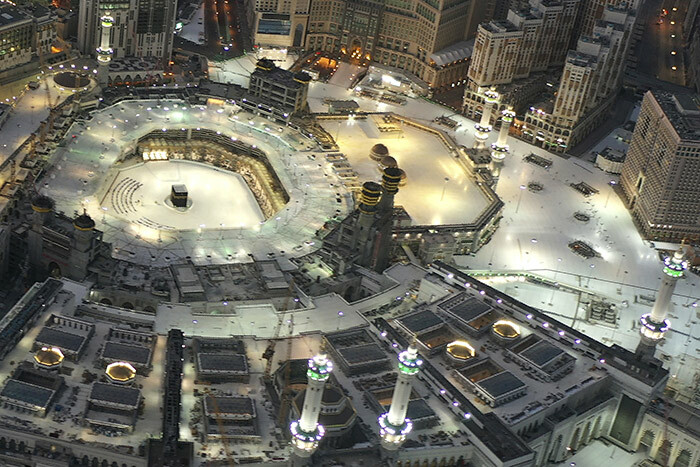 An aerial view of the Grand Mosque and Kaaba in the centre of Saudi Arabia's holy city of Mecca During the early hours of Eid al-Fitr on Sunday. (AFP)

At dawn, small scuffles broke out between Israeli security forces and worshippers gathering around the mosque, although prayers eventually went ahead outside, an AFP photographer said.

"Eid is not Eid with the atmosphere of corona -- people feel a sense of fear," worshipper Akram Taher said.

In Afghanistan, the Taliban announced a three-day ceasefire to mark Eid al-Fitr in a surprise move following months of bloody fighting with Afghan forces after the signing of a landmark agreement with the United States. 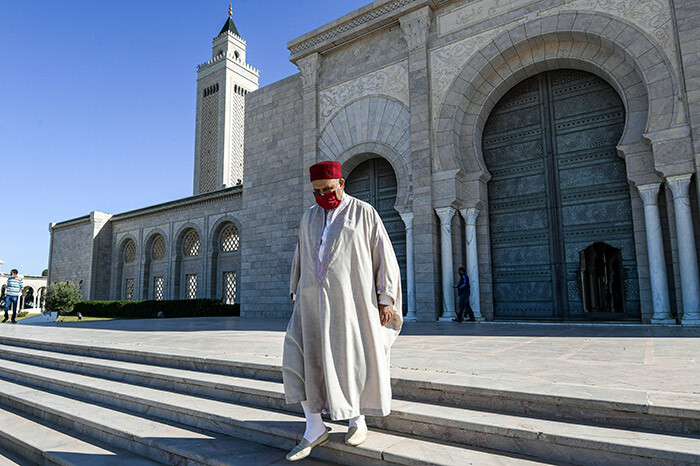 Tunisian Imam Mondher Jeddi, clad in mask due to the coronavirus pandemic, descended footsteps outside Malek Ibn Anas mosque in Carthage, east of the capital, on the first day of Eid al-Fitr. (AFP)

The streets of Kabul were mostly empty as part of a strict lockdown, but some people did venture out and greet each other some from a distance and others hugging and shaking hands despite calls for social distancing.

Muslims across Asia -- from Indonesia to Pakistan, Malaysia and Afghanistan -- have thronged markets for Eid shopping, flouting coronavirus guidelines and sometimes even police attempts to disperse large crowds.

"For over two months my children were homebound," said mother of four Ishrat Jahan at a bustling market in the Pakistani city of Rawalpindi.

"This feast is for the kids, and if they can't celebrate it with new garments, there is no point in us working so hard throughout the year." 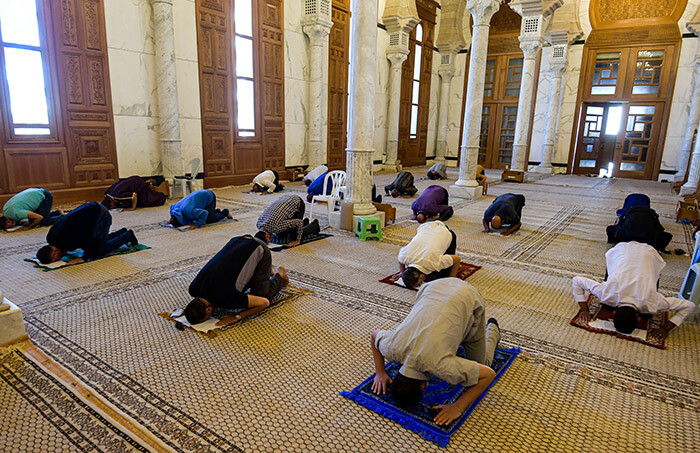 Tunisian worshippers in predetermined spaces inside a mosque, in adherence to social distancing rules due to the coronavirus pandemic, prayed at Malek Ibn Anas mosque in Carthage on Sunday. (AFP)

The holiday began on a sombre note after a Pakistan International Airline flight crashed Friday in the southern city of Karachi, killing 97 people including many who were travelling to see family for the holiday.

The English daily Dawn said the crash, along with the pandemic, had robbed Pakistan of "whatever little joy had been left at the prospect of Eid festivities".

In Indonesia -- the world's most populous Muslim nation -- people have turned to smugglers and fake travel documents to get around bans on the annual end-of-Ramadan travel that could send infections soaring.

In the conservative province of Aceh, large groups prayed together with few masks and little social distancing, and the Baiturrahman Grand Mosque in the provincial capital was packed.

"I did feel worried but as a Muslim, I still had to perform mass Eid prayers as a form of gratitude to Allah," one worshipper, Arsi, said.

COVID-19 death tolls across the Middle East and Asia have been lower than in Europe and the United States, but numbers are rising steadily, sparking fears the virus may overwhelm often underfunded healthcare systems.

Iran, which has experienced the Middle East's deadliest outbreak, has called on its citizens to avoid travel during Eid as it battles to control infection rates.

The United Arab Emirates has tightened its lockdown which had been relaxed during Ramadan, but that has not stopped some families from planning getaways to luxury beachfront hotels.

However, Muslims in many countries are set for frugal celebrations amid growing financial distress.

The twin shocks of coronavirus restrictions and falling oil prices have plunged the Gulf region into the worst economic crisis in decades.

The lockdowns have hit businesses hard, including retailers who would normally be preparing for the festive rush, as Muslims save their money for masks, gloves and other COVID-19 protective gear.

In the Syrian capital Damascus, Eid shoppers rummaged through flea markets for clothes at bargain prices as the war-ravaged and sanctions-hit country grapples with a much more entrenched economic crisis.

"The flea market is the only place I can buy something new to wear for the Eid holidays," 28-year-old Sham Alloush said.

"Had it not been for this place, I wouldn't have been able to buy new clothes at all."

KCC back in action