US stocks open higher, extending run of vo...
Next Story

For years MTN Uganda and the Muslim community have celebrated their longstanding relationship through sharing a meal at the on-set of the Holy month of Ramadan, followed by the telecom's handing over of alms to various Muslim communities across the country.

This year, however, although MTN Uganda could not share a meal with the Muslim community due to the Covid19 social distancing guideline, with permission from the Office of the Prime Minister, the telecom distributed alms to various Muslim communities just like it has always done.

This project that underscores the longstanding relationship between MTN Uganda and the Muslim community in Uganda was executed in partnership with Salam Foundation under the supervision of the National Covid19 taskforce representatives to ensure safe handovers of the alms while enforcing social distance, wearing of face masks, hand washing and sanitizing among others.

Foodstuff worth over sh100m were given to feed over 4700 people through various Muslim communities, starting with the Uganda Muslim Supreme Council in Old Kampala and the Office of the Supreme Mufti in Kibuli. 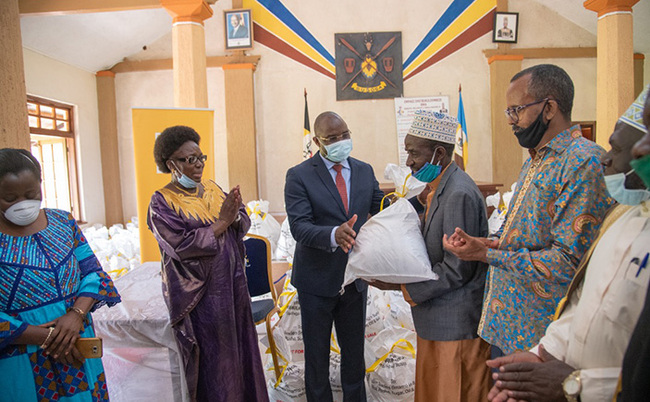 Speaker of Parliament, Rebecca Kadaga at the handover of Ramadhan packages to the Busoga Muslim Community from MTN Uganda

"I thank MTN Uganda and its partners Salam TV for reaching out to us every year and supporting us through the holy month of Ramadan," Ndirangwa said, while receiving the alms from MTN. He noted that the alms would go a long way in supporting the vulnerable members of the Muslim faith, especially during the challenging times of the Covid19 pandemic that had robbed many of an opportunity to earn.

The alms distributed included cooking oil, boxes of soap, sacks of sugar, rice, maize flour, cartons of baking flour, and milk among others. Other beneficiaries of these supplies comprised of the Uganda Police, Luzira Prisons, the Kampala Imams' forum, the Uganda Muslim Broadcasters Forum, the Muslim Teachers Association, the Muslim Widows of Kawempe, assorted Muslim communities in Entebbe, Wakiso, Mukono and Jinja including two orphanages among others.

Most of the beneficiaries were thrilled with joy and had sighs of relief since most Ugandans are currently stuck at home in a bid to stay safe. Orphanages such as the Oasis Orphanage in Lweza have not been spared from the adverse effects of the Covid19 pandemic.

"Our biggest worry was how we were going to feed the children especially because they survive from the generosity of good Samaritans who are now held up at home with no income or means to reach us," said Allen Kizito, one of the founders of the orphanage.

According to Kizito, the Orphanage struggles with necessities food, medical supplies, and rent: "We are so relieved that one of their problems is catered for. Some of the children in the home have medical conditions and thus good nutrition is vital for their growth."

While receiving the supplies from MTN, Sheikh Muhammad Mulaje, the Muslim leader at Luzira prison pointed out that the biggest group of people that are usually forgotten are inmates; "Once one is condemned, it's easy for others to give up and forget them. We are privileged that MTN Uganda remembers us every year. I pray that Allah richly rewards them for their kindness towards us." 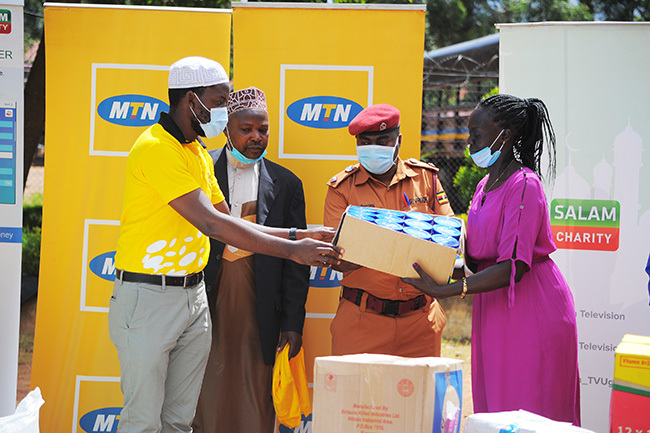 Akirapa Dinah Martha the senior rehabilitation and reintegration officer at Luzira Prison thanked MTN for its kind gesture, citing that; "Inmates have several things they deal with and it's through such acts of kindness from strangers at times are able to transform and work at being better versions of themselves."

In a different arrangement, MTN Uganda handed over food items worth Ugx.20million to the Busoga Muslim community. This was done through the Busoga Kingdom leadership and the Rt. Hon. Speaker of parliament, Rebecca Alitwala Kadaga who thanked MTN for reaching out to the people in Busoga every year under Telecom's Ramadan drive.

Apart from supplying food items to the Muslim community, MTN also launched MTNite Calls as a promotional offer for all its clients, including non-muslims to champion the spirit of togetherness during Ramadan. Customers go 60 free minutes to make calls to MTN Numbers between midnight and 6:00 am, once they loaded airtime or bought a voice/data bundle worth Ugx 500 shillings using MTN MoMo or through an agent.

Ian Mugambe, the High-Value segment Manager at MTN Uganda, who was overseeing the Ramadan drive reiterated how the company always looks forward to Ramadan as it presents them with an opportunity to celebrate their strong relationship with the Muslim community.

"We feel blessed that we are able to spread love and cheer to our Muslim brothers and sisters as they observe the holy month of Ramadan," Mugambe said, adding that; "Now that we have come to the end of Ramadan, On behalf of MTN, I congratulate all the Muslims for staying committed to their faith during these tough times and I wish them a very blessed Eid-El-Fitr."