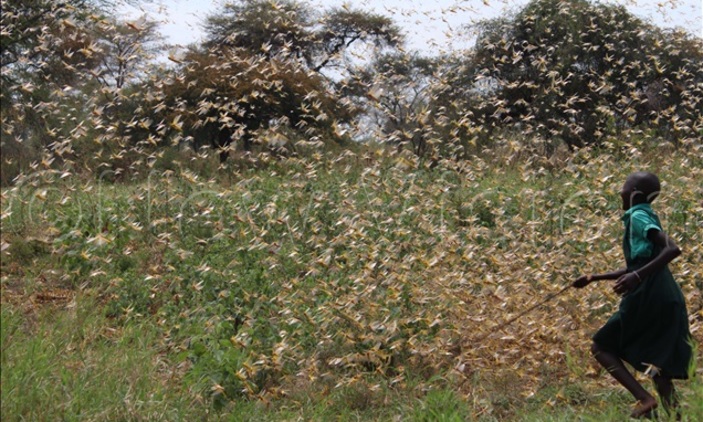 Uganda has received a $48m (sh175bn) loan from the World Bank to help strengthen the country's efforts towards fighting against desert locusts.

The loan from the World Bank's International Development Association (IDA) will help Uganda prevent and respond to the threat to livelihoods posed by the desert locust outbreak and to strengthen its national and regional systems for preparedness.

Similar loans have been extended to other East African countries like Kenya ($43m), Djibouti ($6m), Ethiopia ($31.5 m), and all countries that have been affected by locust invasion since late last year.

Locusts have infested 24 districts in six sub-regions of Uganda, including Acholi, Karamoja, Lango, Sebei, Teso, and Bugisu, since arriving from western Kenya on February 9.

The outbreak could undermine development gains and threaten the food security and livelihoods of millions of Ugandans.

According to the World Bank, the loan will also finance interventions to protect and rehabilitate livelihoods through temporary employment programs and activities that boost resilience, such as water and soil conservation activities, the adoption of agro-forestry technologies and practices, and the buildout of market infrastructure.

The World Bank said the objective of the Emergency Locust Response Program is to respond to the threat posed by the locust outbreak and to strengthen systems for preparedness.

This will be achieved through: locust surveillance and swarm control activities that limit locust population growth and curb the spread of swarms.

The countries will also use the credit to improve preparedness for future locust swarms by strengthening the capacity for surveillance and control operations to facilitate rapid response.

"Within each country, the targeted populations include those directly affected by the locust plague, and those indirectly affected through food price increases due to lost production," a statement from World Bank states.

An assessment carried out by Food and Agriculture Organisation (FAO) and the World Food Program in Karamoja and Teso shows it would cost between $12 million and $42 million to safeguard and restore livelihoods if surveillance and locust management measures are lacking or ineffective.

An estimated 291,000 people are already considered severely food insecure in the two regions, and another 1.32 million people could be at risk.

The World Bank Group is mobilizing a $500 million program of emergency financing, complemented by policy advice and technical assistance, to support countries affected by the locust outbreak.