Risk of losing teams due to virus, says FI...
Next Story

One rally driver describes Suzan Muwonge as being a "very fit driver", who "leaves the cockpit very composed and ready for the next stage".

Suzan Muwonge always impresses whenever she is behind the rally car wheels. (Credit: Johnson Were)

One rally driver describes Suzan Muwonge as being a "very fit driver", who "leaves the cockpit very composed and ready for the next stage".

The 2011 and 2018 champion in a Subaru N12B is no doubt the only female driver in the world to outcompete men in male-dominated sport twice in less than a decade.

Muwonge is confident she still possesses the qualities that helped her win the previous championships and will be soon launching her bid for a third NRC title.

"I know it is not easy to battle those men, but if I did it twice, I can do it for the third - and even fourth time," says the 2011 Sports Personality of the Year. 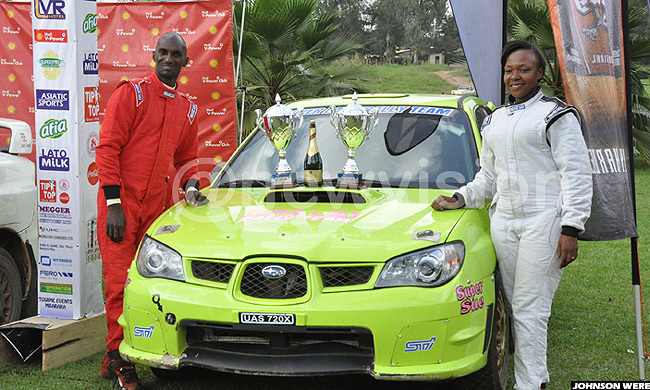 Susan Muwonge with her navigator Edmond Kyeyune in 2018

The secret behind her double success is nothing but preparation, planning and consistent calculations throughout the season.

Many drivers come to events and power their machines to the limit to post the best times in a section, but the rally does not end with one section or a spectator's stage.

According to Muwonge, she always gets pre-season preparations with her team, who include the chairman, team manager, mechanics  and main funder and her husband Lawrence Muwonge Matovu. These pre-season meetings study the championship calendar, draw the budgets and look at the other commitments that may affect Muwonge's commitment in the cockpit as a competitor.

"I cannot be 100 percent dedicated to a rally when, for example, it is time for exams at my school (St. Francis Junior School Budo). So identifying all these challenges before the season starts gives me better planning," explains the 2018 USPA Rally Driver of the Year.

She is always very calculative during events and this has given her consistency to finish on the podium many a time in a season.

"As a driver you have to gauge yourself and understand what it takes to earn your target. So during a rally, we review ourselves stage by stage and strategize which, is not the case with many drivers," she reveals. 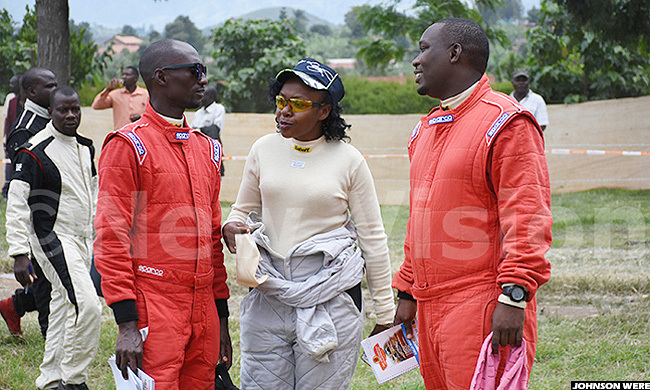 Muwonge says that as a competitor, one must be calculative and that is why in events, she leaves men like Ssebuguzi, Alwi, Mayanja, Kikankane, Blick and Nasser  to battle each other in the first stages of day one, before she launches her assault on them in the rest of the stages when they are 'wounded and limping'.

Unlike other drivers, Super Lady understands her car and knows which areas it performs best and which areas she has to back off in order to complete the stage without damaging the car.

Being with the same navigator, Edmond Kyeyune, for a long time is also a contributor to their success. Kyeyune, too, has earned a name, which he has to protect.

He is careful with the notes, communicates with the mechanics and works with other members of the team as a unit. 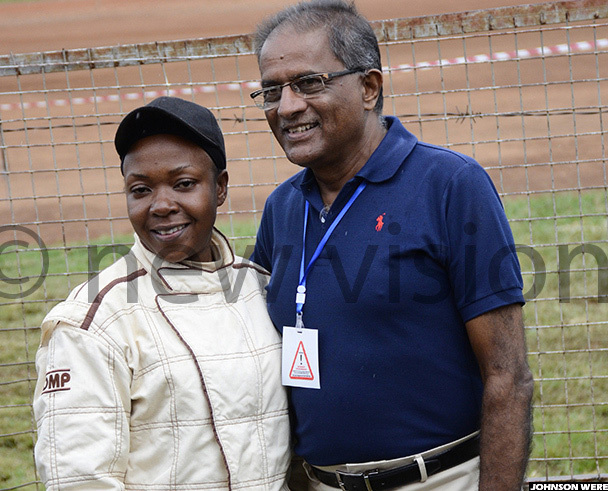 After winning her second NRC title in 2018, many people congratulated Muwonge. And some, like Kenyan sports journalist Abdul Sidi (right), took photos with her

Most drivers go partying at the end of day one. Muwonge does not, and only waits to do so after the rally. This gives her enough time to rest so that she can be in position to be in charge of the car.

Her fitness levels are admirable. In fact, Ambrose Byona describes her a composed driver. "Suzan is a very fit driver. She leaves the cockpit very composed  and ready for the next stage and I have no doubt that she is capable of winning more NRC titles," he says.

Muwonge also credits her mechanics who are very knowledgeable with Subaru cars. The team of mechanics, led by rally driver Fred Wampamba, are always ready to fix any issue on the car in the shortest time possible.

However, the support her husband gives her motivates Muwonge to go for results that inspire him to continue backing her.