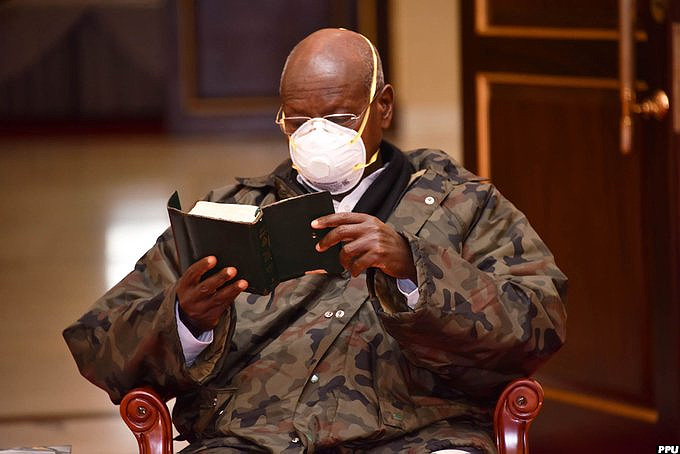 here
TOP National STORY
a year ago .
Museveni announces new measures for easing lockdown
"Opening up is tied to the masks. And the masks will be ready in two weeks," says President Yoweri Museveni, after announcing that the Government will provide free masks to every Ugandan aged six and above.

There you have it then. The President has spoken. The new measures announced for the gradual lifting of the lockdown will take effect on June 2 - two weeks from now.

By that time, it is hoped that the free masks to be distributed to Ugandans will have been ready. For now, the current measures remain in force.

Thank you for following along. Good night! 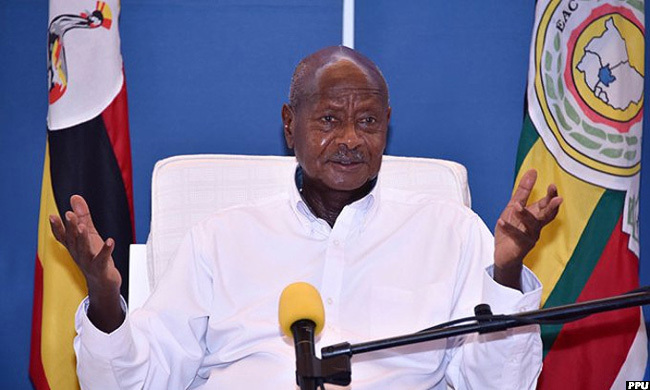 While the President has acknowleges that the Ugandans in the diaspora are a very important component to Uganda's economy - reflected by the $1.3b in remittances, their issue "needs to be discussed rationally".

By this, he is talking about some of them being allowed to return home for various reasons. Museveni points out a number of reasons why they just cannot be allowed to return without having a rational engagement over that.

"Opening up is tied to the masks. And the masks will be ready in two weeks, starting May 19," says President Museveni.

"We believe that with the [proper] mask, you do not infect others and you also do not get infected, on top of all the other measures." 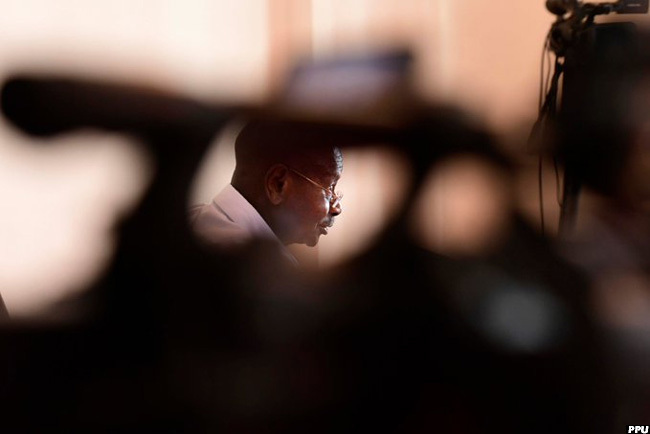 The following are the new measures in easing the lockdown, which are to take effect after the proper masks have been distributed - "up to the village":

1. Shops selling general merchandise will open provided they are not in shopping malls, arcades or markets. For the markets, selling of food items and non-food items should not be mixed. While they remain open, the social dis

2. The "heroic" market women who have been sleeping at the markets will be allowed to go back home and back to the market at will.

3. Minibuses, buses and taxis will be allowed to resume provided they carry a half of their normal capacity. But the re-opening of public transport will not be allowed in the border districts of Uganda for another 21 days.

The Prime Minister, Dr. Ruhakana Rugunda, will on Tuesday announce the list of the named border districts.

But all this will only be in operation when the "proper masks", which will take two weeks to be ready, are available. This means that the new eased measures will take effect on June 2.

4. For now, boda bodas and tuk-tuks (auto rickshaws) will not be allowed to carry passengers. They can only transport cargo. 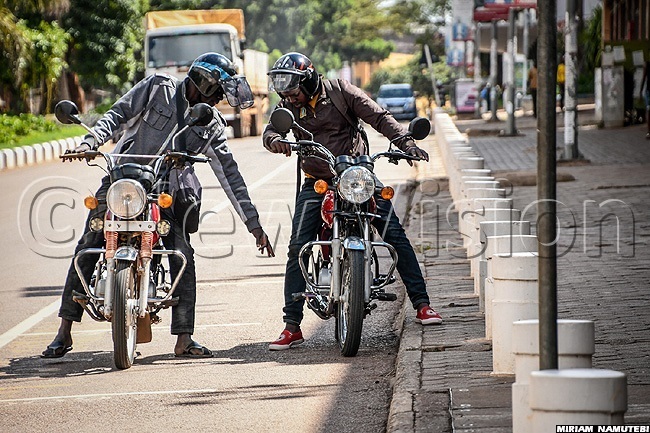 5. Bars, saloons, night clubs, gyms, health clubs and swimming pools will not be allowed to open for another 21 days.

6. The international borders of Uganda will remain closed for now.

7. For education, only candidate classes will be opened. The education ministry will need two weeks to plan for this in tandem with the lifting of the suspension on public transport.

8. People with private cars will be allowed to move, but not carry more than three people, including the driver.

All the other restrictions will remain in enforcement as the situation is being further reviewed.

Considering that many people were complaining that they cannot afford to buy a mask, and also to prevent people from sharing masks, the government has decided to provide masks for free to all Ugandans of six years and above.

They will be distributed through the local council system, announces President Museveni.

The move is to re-emphasize the compulsion of people to wear a mask when in public. 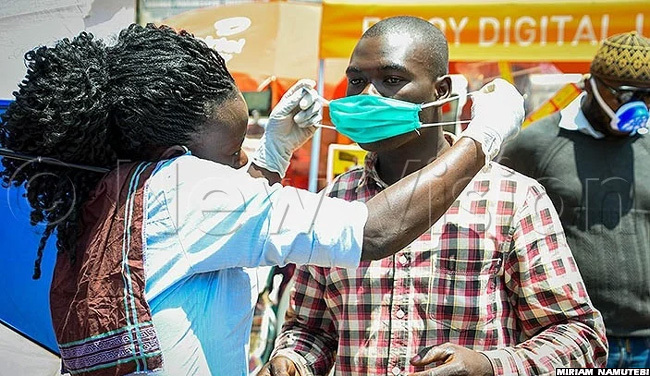 The President assures that Uganda is more prepared to fight the deadly coronavirus, with the efforts by "our scientists" to develop a way of killing the virus with "dedicated medicine" under way.

President Museveni says that the third channel for the potential entry of the virus is the porous borders, which see people come into Uganda walking on foot from neighbouring countries.

Good enough, "that is managed by our RDC system. If they are encouraged and the RDCs keep in touch with them, they can block that third route of the enemy". 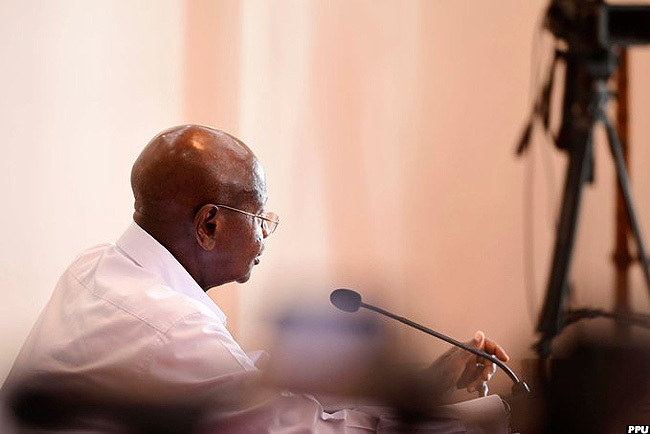 Museveni says that the medium-term solution is to shift most the cargo to the railway, but that for now, Uganda cannot stop cargo.

"We have lost $1.6b from tourism. We may lose $1.3b from remittances from Ugandans living abroad. We canot lose forex from our coffee, tea, milk products, etc in addition to failing to bringing in raw materials, etc.

The only problem that we are going to eliminate now is the delay in the testing, adds the Museveni.

"We shall now not allow any driver to enter Uganda or leave the border until their result is known," announces President Museveni.

The current rapid testing kits (that produce results in 32 hours) are now being concentrated at Mutukula border point, where traffic is lower than other borders.

And the new testing strategy is working. On Sunday, 14 Tanzanians, 16 Kenyans, one Rwandan, one Burundian and three Eritreans were turned back at the different broder points. However, 21 were Ugandan drivers, who have since been hospitalised.

President Museveni says that "the strategy of lockdown has saved us from getting big numbers and has also helped us to have a rough idea as to where the enemy is coming from and also to prepare better".

After dealing with the borders and suspending much of the activity in the country, the President says the enemy (the coronavirus) was dealt a huge blow.

"Now, the enemy is coming from cargo drivers - 73% of all the positive cases," he adds. 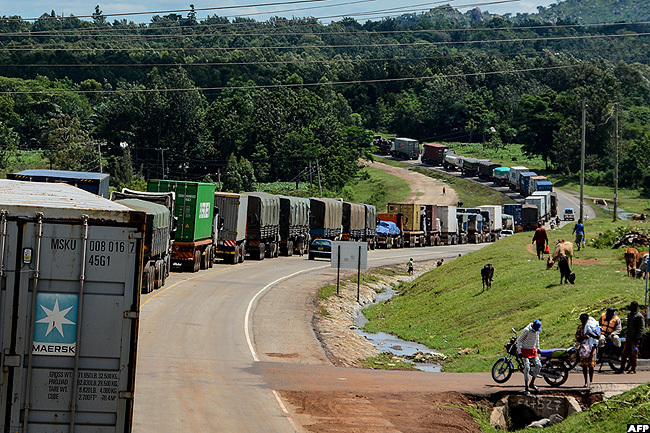 Once again, the President is keen to give justification for why his government has allowed the cargo transporters to continue coming in despite being the source of the persistent numbers of the coronavirus cases in Uganda.

"When we allowed the truck drivers to come in, we knew it was a calcutated but also a manageable risk (...) Much of the in-bound and out-bound cargo is ours," he says.

"It is a wrong strategy to block cargo, but also because it is not necessary." 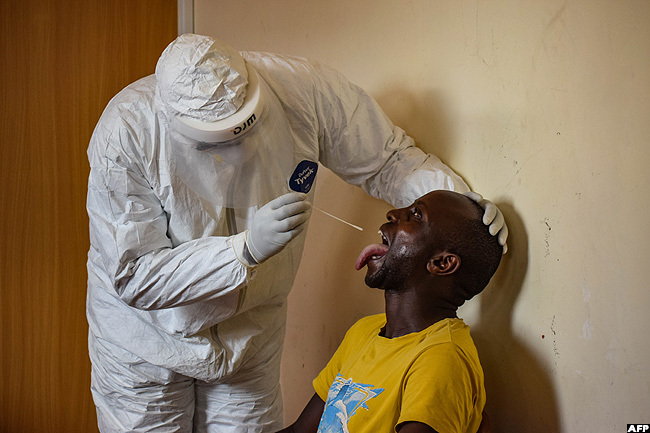 As of May 16, the President says, Uganda had tested a total of 87,832 people for coronavirus.

Of these, 19,500 were returnees, their contacts and members of the population who got worried and wanted to check their status.

Of the coronavirus-positive people, Ugandans were 98 as of May 16, including 54 returnees.

A total of 166 drivers, including 44 Ugandans, were tested positive for the virus, says the President. Of these, 72 were from Kenya, 37 from Tanzania, three from Burundi, seven from Eritrea, one from Rwanda, one from South Sudan and one whose nationality could not be estanblished as his form was still being filled.

Of those infected, as many 63 have been healed thus far.

"I therefore congratulate our health workers and doctors who have detected these cases and treated them," says Museveni, also congratulating the security forces for ensuring that the measures are enforced, the local leaders and their people for their vigilance as well as the members of the taskforces.

The President has started addressing the nation, starting off by asking that he speaks without a mask so that he is audible enough.

He emphasises, though, that it is important that every person wears a mask while in public. In fact, every official present at State House for the address is wearing a mask.

On SSunday, the health ministry announced 21 new positive cases of coronavirus confirmed from 1,071 samples from various border points, bringing the cumulative total number of cases in Uganda to 248.

It was revealed that all the cases are Ugandan nationals from Elegu, Mutukula and Malaba points.

All 253 community samples are negative for COVID-19.

Seated in front of some government officials at State House, the President reasoned that "if each individual can consume about 250g of the relief posho [maize meal] per meal, you can obtain enough calories to enable you to considerably survive for quite some time.  The food should not be consumed wastefully".

The "scientific conclusion" he and his team drew was therefore that 2.6kg of posho can take one through 10 days - if consumed sparingly.

I asked the kitchen staff to prepare 1kg of the maize flour from the food being distributed by the COVID-19 relief team. My intention was to understand how an individual can consume this food optimally during this period. pic.twitter.com/FAQmefRysk

The President wanted to get a better understanding of how one can consume the food being distributed "optimally during this period".

So what did he do?

He tasked his culinary staff with prepare a kilogramme of the maize flour from that being distributed by the COVID-19 relief team. 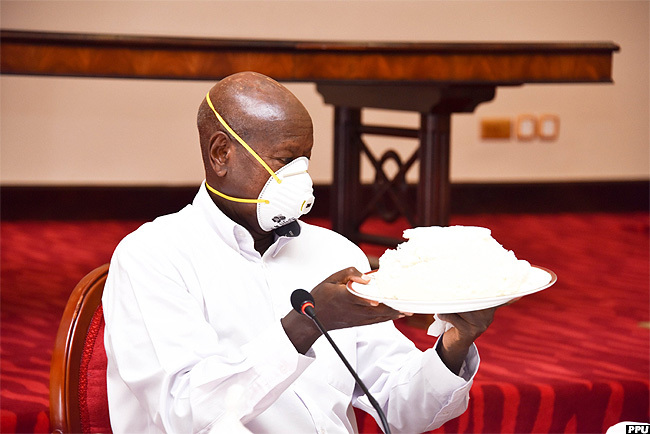 The International Committee of Red Cross has donated items to the Police to help in the fight against #Covid19Ug.

In addition to washing hands with soap, using sanitiser and keeping social distance, President Museveni recently urged people to wear face masks when in public, underlining that they are not a decoration. 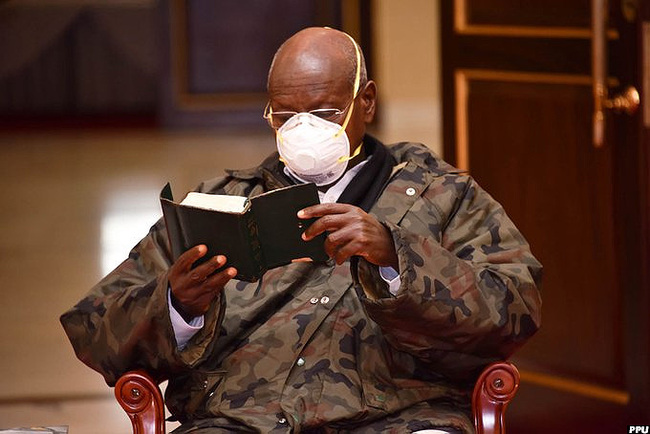 "Don't just make them hang around your neck. Put the mask over your mouth and nose all the time as long as you are in public. Even when you are speaking, leave the mask on because if you remove it, you are infecting or getting infection from the air, and also the hands you are fidgeting with while removing the mask can bring the infection," he tweeted.

Hello and welcome to this evening's live text commentary of President Yoweri Museveni's address to the nation on what next after the extended lockdown comes to an end on Tuesday.

So for now, the dusk-to-dawn curfew is still in force. 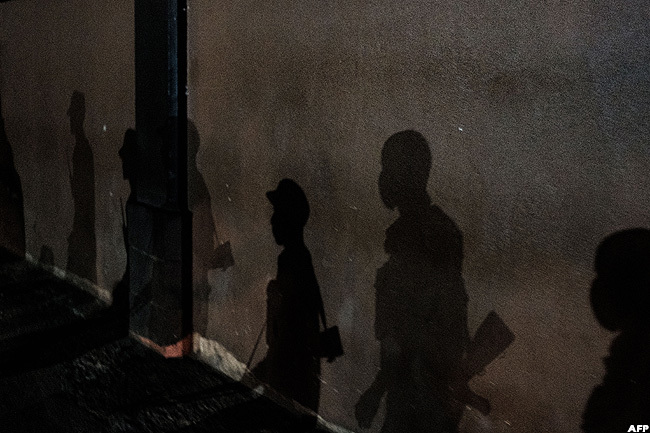