MENU
COVID-19: Give people cash instead of maize flour and beans
Previous Story

Each artiste had a set designed by Club Music in there sitting rooms something that gave not only color, but an identity to the show.

Each artiste had a set designed by Club Music in there sitting rooms something that gave not only color, but an identity to the show.

The first episode of Club Beats Season 2 was premiered live on Saturday by Club Pilsner and Club Music. The online concert brought together a host of Uganda's hitmakers like Fik Fameica, Karole Kasita and King Saha, a lineup that got many online show enthusiasts excited.
The show, unlike many others, was prerecorded moments earlier, with well-produced performances for each of the artistes.
The concept of the show, as in season one, was designed like a TV show, with a host, Martha Kay. She kept on engaging each performer from their homes, studios.
Each artiste had a set designed by Club Music in there sitting rooms, with a screen showing a club beats logo, a backdrop of blue lights, something that gave not only color, but an identity to the show.
No doubt the first online concerts suffered, among many, the challenge of poor sound. Luckily for the subsequent concerts, the organizers have done revealingly well to improve sound. The first artiste of the night, Sam Principal, opened with one of the biggest songs in the lockdown, Kalantin Eno, setting the pace for an energetic show. 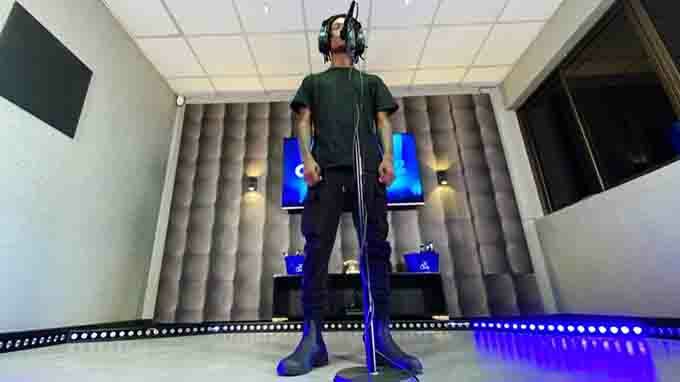 Fik Fameica put in an energetic performance causing a relentless buzz on YouTube. (Courtesy Photo)
The artistes performed on semi-live band, which made the sound crispy and filtered. One with a good music ear would say that the semi-live performance was executed well. Because the show was prerecorded, the producers had time to fix every instrument and production for near perfection.
Martha Kay juggled the performances with heated interviews and conversations with the artistes about their lows and highs in the industry. This, too, evoked reactions online.
Fik Fameica intimated that the lockdown has got him learning and trying out a few things like TikTok comedy pranks to keep his fans entertained.
"To be honest, I have learnt most of these things during this lockdown period," he said
Performing Tell me, Fameica raised the tempo high up, causing relentless buzz on YouTube. Karole Kasita would later manage to keep the tempo high up there. Performing with live band, Kasita opened with Obuwoomi, a performance that got many reacting with admiration.
However, more exciting from Kasita was her performance of a cover song, Come Over by Estelle and Sean Paul. She sounded like she had rehearsed and mastered the song quite well.
King Saha, lowered the speed of the performances, not to bore his viewers online, however, but to drift the entertainment a bit. He performed hits like Mpa Love, Gundeze and Hello Hello among others. DJ Ciza closed the show.
With over 3000 viewers on YouTube, the show went on for 1 hour, leaving viewers begging for more performances.