The rising water levels of Lake Victoria have immersed nearly 20% of the 100-acre island.

The rising water levels of Lake Victoria have immersed nearly 20% of the 100-acre island.

WILDLIFE  NATURE  CLIMATE CHANGE
ENTEBBE - Lying 23km from Entebbe municipality, Ngamba island is home to 50 orphaned Chimpanzees that were rescued from different parts of Uganda as a result of human-wildlife conflict.
The 100-acre forested piece of land is one of the islands that form Koome islands in Mukono district. Not only is it a safe haven for orphaned Chimpanzees, the island also has accommodation facilities for tourists and honeymooners from all walks of life. 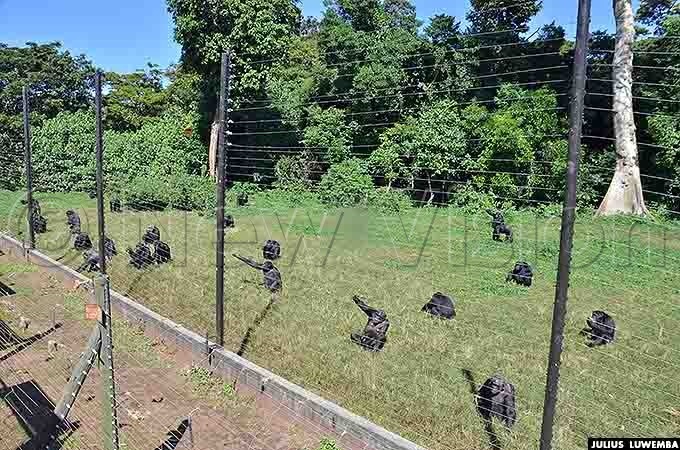 50 orphaned Chimpanzees are currently kept at the sanctuary
On April 24, NewVision ran a story- Entebbe, Ngamba sanctuary animals staring at starvation, which pointed to the fate of animals at Entebbe zoo and Chimpanzees at Ngamba island amidst the current situation of Covid19. The story was detailed of how the preventive measure of closing the sanctuary to visitors, had come at a huge cost in terms of feeding.
According to Dorothy Basemera the guest-relation officer, Chimps at Ngamba island feed on vegetables, cereals, eggs, porridge among other foods worth Sh80m per month. "The sanctuary has been surviving on donations and funds by mainly international tourists who can no longer travel. Those who had earlier booked, have since re-scheduled their trips to as far as 2021," noted Ngamba's Basemera. 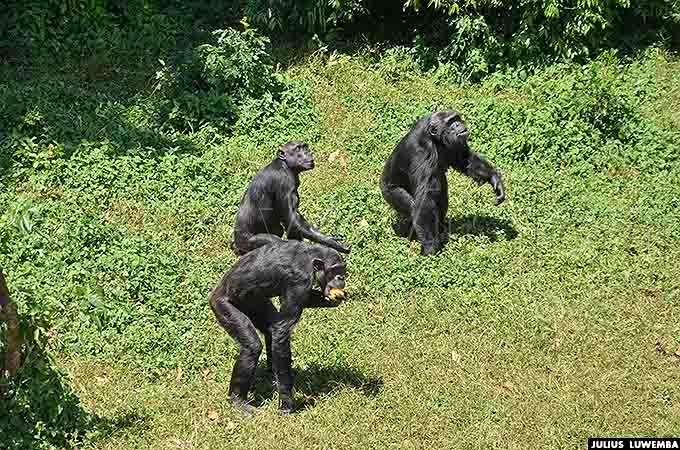 Chimpanzees are fed more than three times every day at Ngamba sanctuary
She added that the sanctuary has been feeding Chimps on food reserves, which are expected to last up to May this year.
Rising water levels engulf part of the island
The rising water levels of Lake Victoria have immersed nearly 20% of the 100-acre island, according to Dr. Joshua Rukundo the Executive director of Chimpanzee Sanctuary and Wildlife Conservation Trust (CSWCT) which manages Ngamba Island. 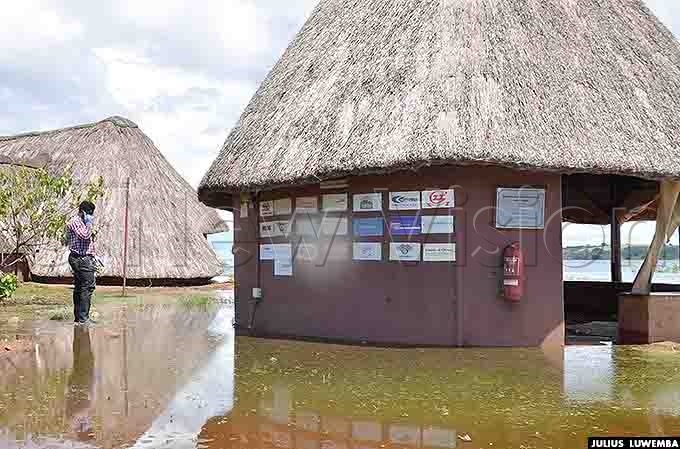 The information centre where visitors are given the information regarding the sanctuary
"The lake started extending inland in February and now has taken up a big part of the island, destroying most of the accommodation facilities and now approaching the staff quarters," intimated Dr. Rukundo. 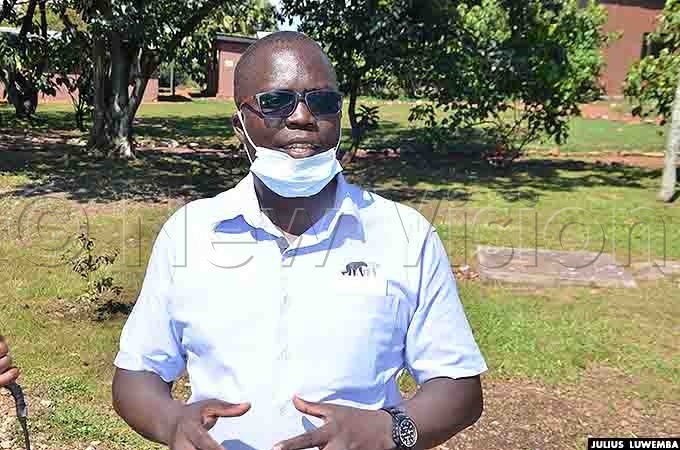 Joshua Rukundo, the Executive Director for Chimpanzee Sanctuary and Wildlife Conservation Trust an NGO which manages Ngamba Island
Even the two piers at Water-front beach in Entebbe and the one at Ngamba where boats used to dock, got submerged in water. The scenic island with a lot of birds and vegetation cover, curved with neatly thatched houses, is losing the battle to ravaging waves and rising water levels.
The signpost with inscription "Welcome to Ngamba island chimpanzee sanctuary," which used to lie over 50metres away from the lake, is now immersed in water. Similarly, the emergency assembly point where staff and visitors used to parade in case chimpanzees went rouge, has been swept away by the waters. 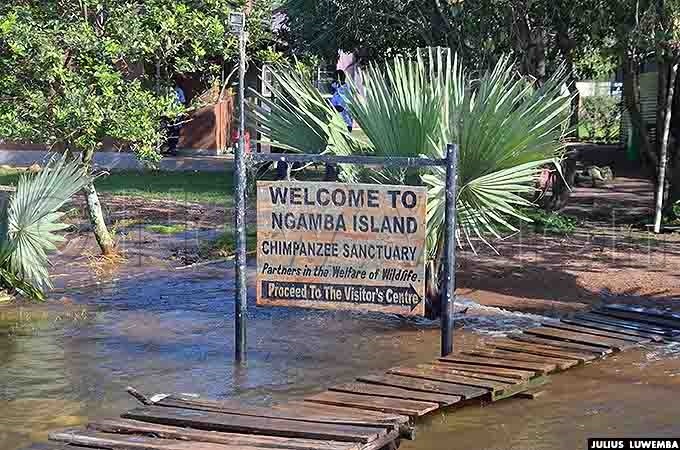 The sign-post welcoming visitors to the sanctuary, which used to lie several meters away from the lake, is now sunk in water
"And we believe that water levels are still rising, at least for the next couple of months. We have cleared, covered and demarcated some spots where there are ditches and holes in the forest and are filled with water, which can trap Chimps," noted Dr. Rukundo.
He added that some of the electric poles around the sanctuary have been deluged in water, making it risky for either chimps to escape or allow external creatures to access the sanctuary. 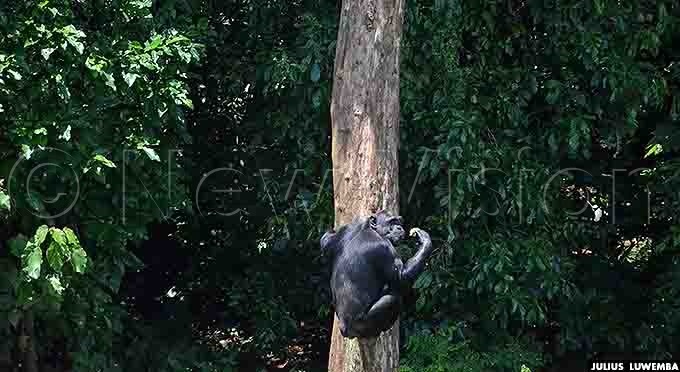 A chimpanzee climbing a tall tree at the sanctuary
Rukundo to government and other organisations committed to conserving nature and wildlife, to extend a hand towards the well-being and feeding of Chimps at the Sanctuary. "We are making online campaigns, appealing to among others, our local supporters and also wish to extend it to the public where we can collect whichever amount, however small it can be," appealed Rukundo.

The information centre among other accommodation facilities remain submerged in water
Lilly Ajarova the Chief Executive Officer for Uganda Tourism Board (UTB) who is also the former executive director of the sanctuary, expressed great concern for the orphaned chimps which are trapped in two unfortunate circumstances. 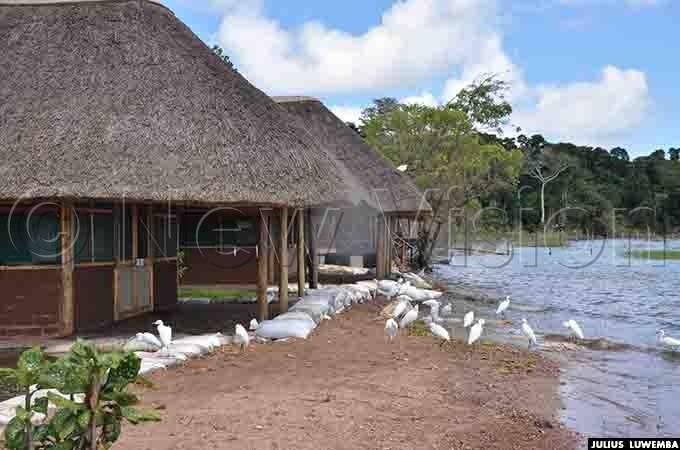 Accommodation facilities at the sanctuary can no longer be occupied due to ravaging waters and strong waves
"Those who have known me for years, surely know that this place holds a special place in my heart. It's hard to even talk about myself without mentioning the Chimpanzees. I am asking that we spare whatever little we can, to make a donation towards feeding of Ngamba island's Chimps. This is a difficult time for the sanctuary especially since travelling has been put on hold," reads a Facebook post by Ajarova.