KAMPALA - Buganda Road Court Grade One Magistrate, Marion Mangeni has set May 21 to rule on whether jailed telecommunication engineer and two company managers on charges of duplicating COVID-19 car stickers will be granted bail.

They are battling with three counts of forgery, negligent Act likely to spread infection of disease and conspiracy to commit a felony, contrary to Sections 171, 342, 347, and 390 of the Penal Code Act.

The trio is charged along with Ali Byakika, a student of the Islamic University of Uganda and his brother, Byakika Najib 20, all residents of Kibuli Mosque Zone, Makindye Division in Kampala.

The court on Thursday fixed the date following submissions of defence lawyers Willy Ssebulime and George Omunyokol, who entreated court to grant the accused bail saying their clients were ill and have spent many days on remand.

"With all the sureties presented, let the accused be released on bail. More so Junju who suffers from Hiatus hernia and duodenitis," Omunyokol said.

He added that the had undertaken to produce all the accused in court through the trial of the matter and medical forms regarding some of the accused's illnesses were availed to court.

Among the sureties were John Sseninde, Samuel Luyonde, Asuman Waiswa, and Mary Asekenye, among others.

However, the state prosecutor, Ivan Kyazze informed the court that he needed an adjournment to enable him to verify the medical documents brought to court and the national identifications of the sureties presented. 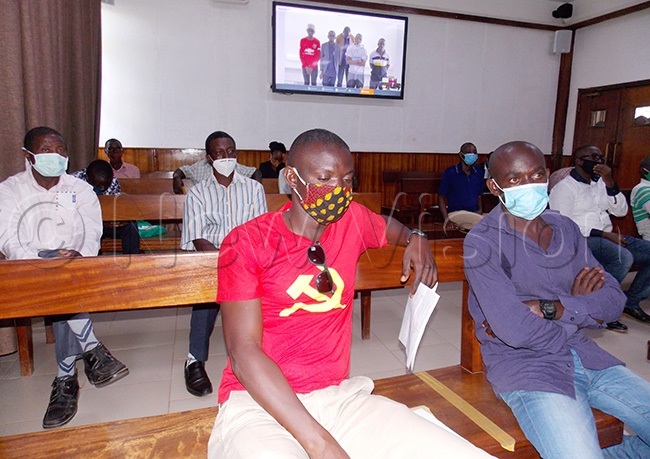 "Your honour, we need request for seven days from today to enable us to verify these medical forms and authenticate the documents presented by all the sureties," Kyazze submitted.

This prompted the trial Magistrate to adjourn the case to May 21, 2020, saying it would be fair to give the prosecution time to attest the sureties' and medical documents presented to the court.

"I carefully listened to all parties and I find it fair to grant the prosecution an adjournment to enable it to verify the submitted documents and identities of the sureties," Mangeni ruled as she adjourned the case.

Under the law, the offence of forgery attracts a maximum sentence of three-year imprisonment, on conviction while the rest of the offences elicit seven-years- jail.

The prosecution alleges that between March and April 2020 within Kampala district, with intent to defraud and deceive, the accused and others still at large forged 167 Ministry of Works and Transport (MoWT) Covid-19 motor vehicle stickers purporting the same to have been issued by the MoWT, whereas not.

It is also alleged that the accused forged MoWT stickers knowing or having reason to believe that their acts were likely to spread infection of a dangerous disease namely COVID 19.

Indonesians To Invest In Uganda

Indonesians To Invest In Uganda