Children with their mother cheer after receiving maize flour and beans from the government on Wednesday May 13, 2020. Photo by Juliet Lukwago

KAMPALA - The electorates of Rubaga North Constituency have queried the remarks made by their MP, Moses Kasibante on the food distributed by Government.

There was a heated debate in Parliament on Tuesday after a group of the Opposition legislators tabled before the House samples of bad food allegedly being distributed under the government-led national COVID-19 response arrangement.

The opposition chief whip who is also the Kira Municipality MP, Ssemujju Ibrahim Nganda, together with MPs Moses Kasibante (Lubaga North), Allan Ssewanyana (Makindye West), and Gilbert Olanya (Kilak South) accused the government of distributing food that is not fit for human consumption.

Kasibante said; "I personally picked these beans from one of my constituents' right after distribution by the national task force and they are from labeled packs." 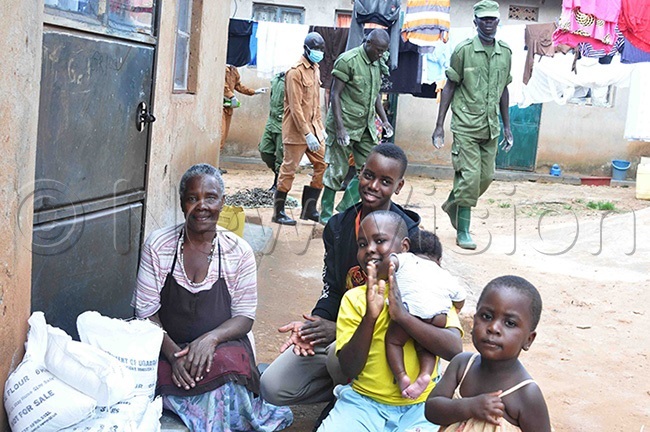 Children and their father excited after receiving food relief

The Speaker, Rebecca Kadaga, said that Parliament will interest itself in the quality of relief food distributed to the masses.

The Uganda National Bureau of Standards (UNBS) recently raised a red flag after it discovered that some of the relief food distributed by the government was not suitable for human consumption.

Jenifer Ndagire, a resident of Lungujja zone in Lungujja parish, on Wednesday received the food. As a family of four, they received 16kgs of maize flour and 12kgs of beans.

"We had given up after eagerly waiting for the food for so long. But we are now very happy that we have finally got it," she said.

Holding beans in her hands she said; "I have checked the flour and beans are all good, even if it was not good, is better than nothing because we had run out of food."

She said the claims by her MP Kasibante, that they have been given rotten food were an embarrassment.

"Kasibante should tell us where he got the rotten beans, he took to Parliament claiming that they have been distributed to residents," she said. However, the women council leader of Kosovo-Lungujja zone, Jackeline Nakalema, accuses Kasibante of always wasting a lot of time on non-issues and politicking other than addressing the electorates' concerns such as the big open drainage in the area which floods during rainy seasons.

He said that parishes that have already been covered include Mutundwe, Nankulabye, Kasubi, and Busega.

"In the areas where we are yet to reach, we have been giving them some food out of the donations we get at the Division from well-wishers," he said.

Kabunga remarked while receiving a donation of 120 cartons of milk, 500kgs of sugar, and one tone of maize flour from businessman Singh Katongole.

Kasozi misses cut at Karen, out of Kenya Open

Ugandans have a lot to discover