MENU
It is a bouncing baby boy for Juliana
Previous Story

Toto: My lockdown story in the Netherlands
Next Story

The choir comprised of three ministers – Sitenda and the Kaziimba Boys. You can imagine how the ensemble ministered in the gigantic cathedral that is used to the thunderous sounds of the kingly pipe-organ.

The choir comprised of three ministers – Sitenda and the Kaziimba Boys. You can imagine how the ensemble ministered in the gigantic cathedral that is used to the thunderous sounds of the kingly pipe-organ.

Why would a young couple, like Enock Musasizi Kaziimba, 28 and Josephine Babirye, 27, not wait for the pandemic to pass to hold a grandiose function? Were they not saddened that they tied the knot in the presence of just a handful of people? Mathias Mazinga met with the couple at the Archbishop's palace in Namirembe on April 26, to find out

When President Yoweri Museveni temporarily banned big wedding parties, as one of the ways to control the spread of the coronavirus, many people did not think his preferred option of a ‘scientific wedding' would be accepted by young people, particularly those from affluent families.

Therefore, when Captain Enock Musasizi Kaziimba, a pilot and flight instructor and statistician Josephine Babirye, 27, held a scientific wedding on April 18, many were astonished.

People were more stunned because Musasizi is the son of the Archbishop of the Church of Uganda, the Most Rev. Samuel Stephen Kaziimba Mugalu. 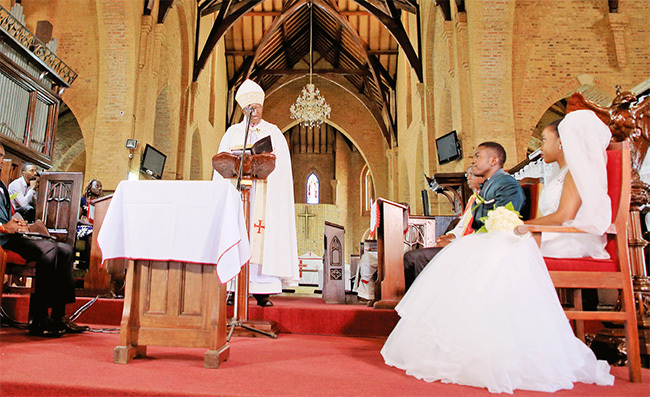 I am a commercial pilot and flight instructor based in South Africa. I thank God for giving me Babirye as my wife. She has already started enriching my life.

Initially, it was not our desire to have a scientific wedding. Josephine, my parents and I, wanted to have a big function, attended by about 1,000 people.

However, when the President issued guidelines on the COVID-19 pandemic, things had to change. We had started planning when the pandemic hit.

We had budget proposals and we were in the process of confirming them.

In fact, on the day the President announced the guidelines, we were supposed to have a meeting to confirm the budget. Our reception was to be held at Mengo Senior School playground. 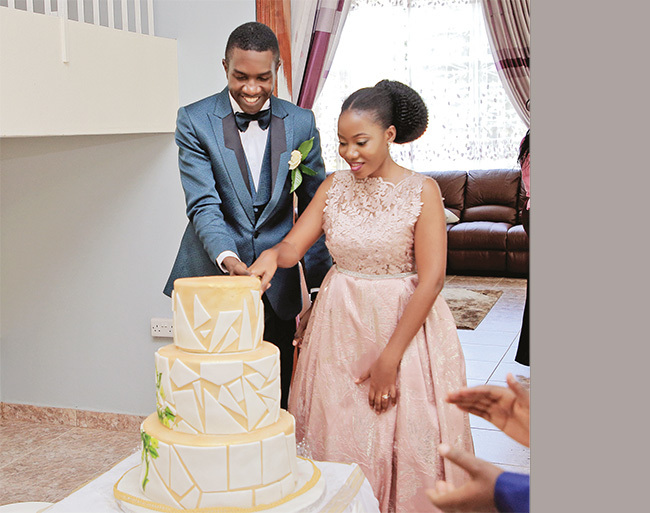 Luckily, we had not gone too far with the plans but we had confirmed  Namirembe Cathedral as our church, as well as the entertainment and the service providers. Luckily, we had not yet made payments. We had planned to spend about sh100m.

When the President announced the directives, my conscience told me to go ahead with my wedding. I called Babirye to find out what her opinion. Interestingly, she didn't seem perturbed.

Just like me, she thought we should go ahead with the function. I felt at peace in my heart because I did not have to argue or belabour to convince her. All we wanted was to get married.

When the time the committee sought our opinion, we told them that we wanted to go ahead with our function. Musasizi and Babirye on their wedding day

Of course, some people found our decision weird, but we knew that what was significant was the marriage, not the flamboyance that would come with a wedding ceremony. It is good to have a congregation of Christian witnesses, but they are not the purpose of marriage.

We decided to go ahead with our function. After all, we did not know when and how the pandemic would end.

By the way, from the start, I was inclined towards a relatively simple function. When Babirye and I started talking about our wedding a couple of years ago, the idea we had was about 300 guests. But, of course, when Dad became the Archbishop, I knew this would not be possible, owing to the influence of his office.

My wife is the daughter of Salongo Emmanuel Musisi Sebyala and Nalongo Harriet Nakato. I met her through a friend, with whom I had attended O'level at Seeta High School. 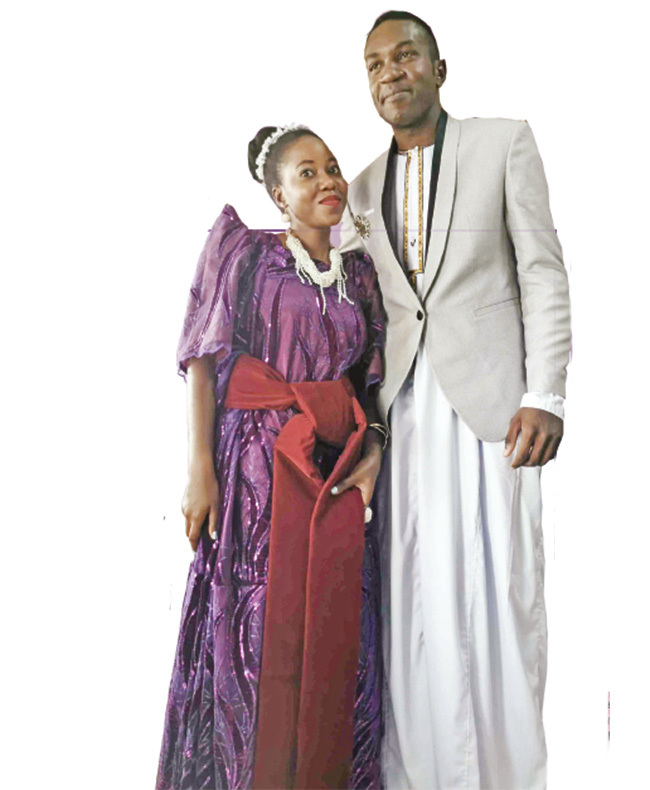 Musasizi and Babirye during their Kwanjula

During our subsequent interactions, my friend would tell me about her new friend, Babirye. Later, during our Senior Six vacation, I got the opportunity to meet Babirye. We continued meeting because the two were together often. Eventually, Babirye and I became friends and I got to know her better.

Babirye is beautiful, but I wouldn't say it is her beauty that hooked me. I am not the kind of person that falls in love at first sight. What really won my heart were her qualities that don't fade as physical beauty fades. I realised she was intelligent, prudent in speech and action.

Her words were well-thought-out. She had good ideas and advice and was also Born-again.

On realising those rare qualities in Babirye, I knew she was my ideal woman. She was so reserved that she would not open up to you unless you had a close relationship with her.

I was sure we could work towards marriage.

So, before I went to South Africa to train as a pilot in 2012, I told her how I felt. I encountered no resistance. She simply accepted. That is how our relationship culminated in marriage. 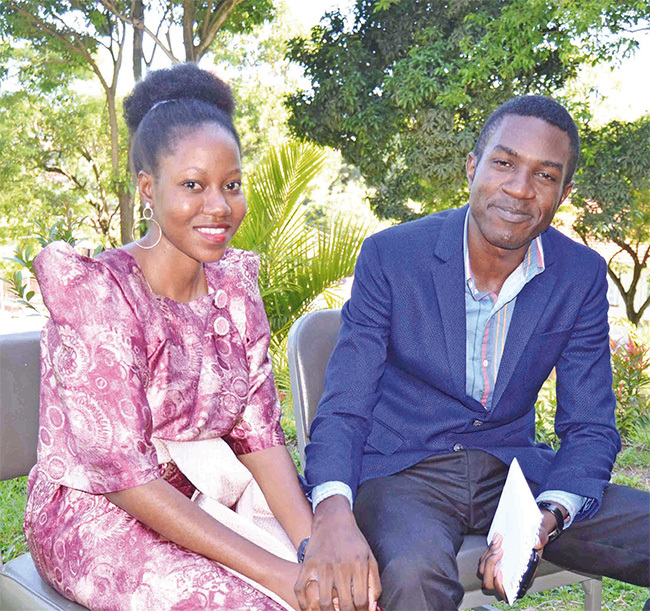 The Kaziimbas at the Archbishop's Palace in Namirembe

Our journey has not been without challenges. I have been in South Africa for about eight years and there came a time when challenges of a long-distance relationship came in.

At some point, I felt like I was wasting Babirye's time and that it would be better if she moved on and found someone else.

However, when I sought her opinion, she told me she loved me and she would wait for me for as long as it took. She told me if she just wanted a man for the sake of having a man, she would have already gotten one.

Her prudent and mature response gave me a lot of encouragement and security. Consequently, I became more committed to her.

We have started the journey of our marriage during a time of unprecedented global challenges. But we have faith in God and we are certain He will give us His protection and providence.

I am at peace with him - Babirye

We agreed to go ahead with our wedding as earlier planned because we had a bigger picture of marriage and its importance.

To us, marriage meant much more than the number of people that would grace our wedding or the general flamboyance it would carry.

My husband knows God. With him beside me, I have peace and assurance.

I advise young couples who intend to marry and those that are already married, to be mindful, pray, and communicate.

This will help sustain their marriage. They should also count on God all the time. If you allow being taken up by pressure, you will miss God's promise.

She has rare qualities - Musasizi

Babirye is beautiful, but I wouldn't say it is her beauty that hooked me. I am not the kind of person that falls in love at first sight.

What really won my heart were her qualities that don't fade as physical beauty fades. I realised she was intelligent, prudent in speech and action. Her words were well-thought-out.

She also had good ideas and advice. She is also Born-again

How the function unfolded

Our wedding service took place on April 18, at 10:00 am. It was presided over by the Bishop of Namirembe, Wilberforce Kityo Luwalira.

We had no entourage. Just a few people.

The choir comprised of three ministers - Sitenda and the Kaziimba Boys. You can imagine how the ensemble ministered in the gigantic cathedral that is used to the thunderous sounds of the kingly pipe-organ.

After the service, we went to the Archbishop's Palace, in the vicinity of the cathedral, where my family shared lunch with a few guests.

These included Bishop Kityo Luwalira, Dr Gaster Lule Ntake, and Rt Honourable Ruth Nankabirwa. We had a photographer, who took us through a photo-session at the palace. After lunch, Babirye and I cut the cake. Bishop Luwalira gave us the final blessing and we went away for our honeymoon. 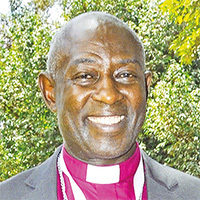 The newly inaugurated Archbishop of the Church of Uganda, Dr. Samuel Stephen Kaziimba Mugalu received some disapproval for his son's simple wedding, yet he is in a highly privileged position to receive enormous donations from his relatives, friends and international connections.

The Bible puts it to us to respect and obey our civil leaders because they were put in their respective positions by God (Romans 13). So, when the President issued the COVID-19 guidelines and prohibited congregations of more than nine people, we had to respect his order. As you are aware, we are religious leaders, who, by virtue of our position, are supposed to be exemplary.

The canons of the Church also recommend at least five witnesses for a wedding function to be valid. So, we were in line with the Canon Laws because we were slightly more than five. But the most important thing for us to understand is the essence of marriage.

Christian marriage is between a man and a woman, who agree to live together as husband and wife, out of mutual consent.

Before taking the decision to have a scientific wedding for our children, we consulted them and they both expressed remarkable willingness to go ahead with the function.

We also consulted the parents of our daughter-in-law, who also gave the function a green light. So, there was no other valid reason as to why we had to delay the wedding.

It is also important for our friends and well-wishers to know that our son, is a commercial pilot working with an aviation academy in South Africa. He was given a short break for his wedding. For that matter, there was no way he could postpone his function.

We are, however, mindful of the concerns of our relatives, friends, and well-wishers, who wanted to be with us as we celebrated the marriage of our children. So, we are thinking about organising a thanksgiving function when things get back to normal.