How coronavirus is changing daily life in ...
Next Story

A Sikh groom (L) and a bride along with family members walk along a street as they go back home after their wedding, on the outskirts of Amritsar on April 29, 2020. (Photo by NARINDER NANU / AFP)

Under lockdown and far apart, Sushen Dang and Keerti Narang went online to say their marriage vows and pulled off a spectacular Indian wedding complete with thousands of guests and raucous Bollywood dancing.

In a country famous for lavish weddings that last for days, the young couple are among a growing number modifying their marriage ceremonies under a virus lockdown that has limited public gatherings.

Eager to go ahead with the arranged marriage on the auspicious date selected for them by a priest, the pair turned to the internet to tie the knot.

"We never imagined that even our online wedding would be so grand," Dang, a 26-year-old data analyst who is based in Toronto, told AFP of the April 19 event.

"A hundred guests joined in our celebration on the app. We live-streamed the ceremony on Facebook which was watched by another 16,000 people." 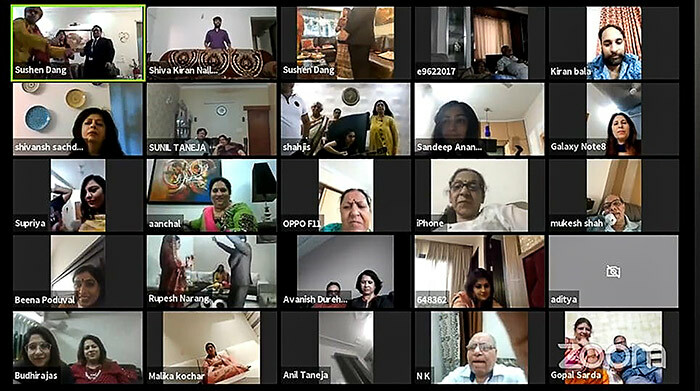 This handout screenshot of a video call on April 19, 2020 received courtesy of Shaadi.com shows relatives and friends watching a livestream of wedding celebrations of groom Sushen Dang (L in top L) at his home in Mumbai and bride Keerti Narang (not pictured).

The nuptials spanned the country.

Dang, decked out in a turban and traditional sherwani kurta, logged on from Mumbai on the coast of the Arabian Sea, while Narang in her red bridal finery joined from Bareilly in northern Uttar Pradesh state that borders Nepal.

The priest overseeing proceedings chanted hymns as he sat before a ritual fire at his home in Raipur in the central state of Chhattisgarh, with guests logging in from Delhi, Gurgaon and the southern tech hub of Bangalore.

There were minor hiccups some elderly family members were accidentally unmuted and pets photo-bombed screens.

But the energy levels remained high and the occasion was capped off with a fun Bollywood-style dance performance by their cousins.

The wedding video posted on Facebook has so far garnered nearly 260,000 views, making the newly-weds "feel like celebrities". This handout screenshot of a video call on April 19, 2020 received courtesy of Shaadi.com shows priest Sharan Tripathi officiating the wedding rituals of groom Sushen Dang (L in 2nd L) at his home in Mumbai and bride Keerti Narang (not pictured).

In western Rajasthan state alone some 23,000 weddings meant to coincide with the Hindu Akshaya Tritiya festival on April 26 were called off due to the pandemic.

More than 10 million weddings are held annually in the nation of 1.3 billion people, with the marriage industry estimated to be worth some $40-$50 billion, according to advisory firm KPMG.

The sector like the rest of the economy is reeling from the impact of the virus, with planners, caterers and decorators among those who have incurred huge losses.

"We thought, 'Why don't we be the flag-bearers and drive weddings online?'," said Adhish Zaveri, marketing director at matrimonial website Shaadi.com which facilitated Dang and Narang's wedding.

"A wedding is probably the most important day of somebody's life ... and we thought we have to make it as special and close to a real wedding as possible," he told AFP.

Online nuptials are among a string of weddings in India that have gone ahead amid the lockdown with some unusual variations. 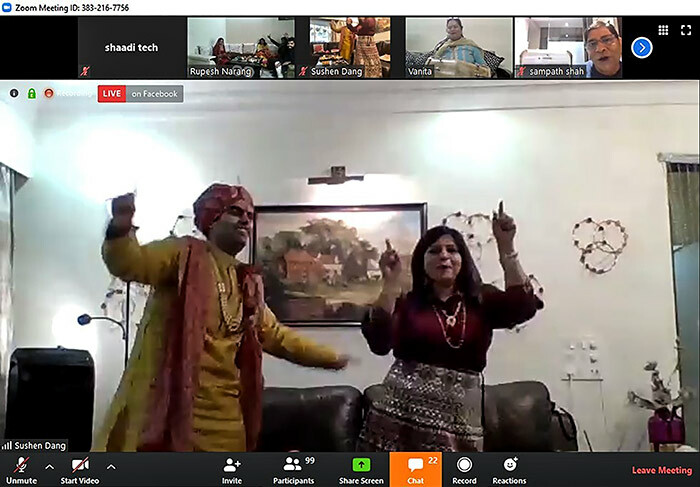 One couple in Uttar Pradesh said "I do" inside a police station after more conventional venues like banquet halls, hotels and temples were all ordered closed during the lockdown.

And in Madhya Pradesh in central India, a bride and groom, their faces covered by masks, exchanged garlands a key ritual in a Hindu wedding with the help of bamboo sticks in a no-contact ceremony.

Zaveri said the significantly cheaper online ceremonies could become an option for couples amid the uncertainty about how long the pandemic is going to last.

Couples are charged less than 100,000 rupees ($1,300) for the virtual services, Zaveri said, adding 12 more such weddings were in the pipeline.

To give the online ceremonies a professional touch, make-up artists and sari-draping experts are hired to help the bride, while a folk singer is engaged to serenade the guests.

All participants are sent logins and passwords so that strangers can't gatecrash the event.

Kirti Agrawal who married her beau Avinash Singh Bagri on April 14 on the balcony of their relative's flat as friends and family watched on a videoconferencing app said the digital approach appealed to her.

"I didn't say that I am not a fan of big, fat weddings. But when I heard about the wedding-from-home idea, I was very happy."

Gen Museveni: We should have proper soldiers, not scare crows