Legal services are essential during the CO...
Next Story

Bainomugisha said he is privileged to have worked under him as the Auxiliary Bishop for 15 years.

His Grace Lambert Bainomugisha the new Archbishop of Mbarara Archdiocese addressing a press conference on Wednesday at Nyamitanga Cathedral. (Photo by Adolf Ayoreka)

Bainomugisha said he is privileged to have worked under him as the Auxiliary Bishop for 15 years.

RELIGION  CHURCH
MBARARA - His grace Lambert Bainomugisha the newly appointed Archbishop of Mbarara Archdiocese has thanked his predecessor, the Most Rev. Paul. K. Bakyenga for the three decades of dedicated services at the helm of Mbarara Archdiocese.
Bainomugisha said he is privileged to have worked under him as the Auxiliary Bishop for 15 years.
"Bakyenga is still around and his console and wisdom will remain a source of inspiration to the Archdiocese," he said.
Bainomugisha made these remarks on Wednesday while addressing his first press conference at Nyamitanga cathedral.
On COVID-19
Bainomugisha commended the government's efforts and measures instituted in the fight against the global pandemic, COVID-19.
"COVID-19 is associated with fear, sickness, suffering even death but I want to assure Christians and people of Uganda that we should remain strong in the fight against this seemingly invisible enemy" he expressed. 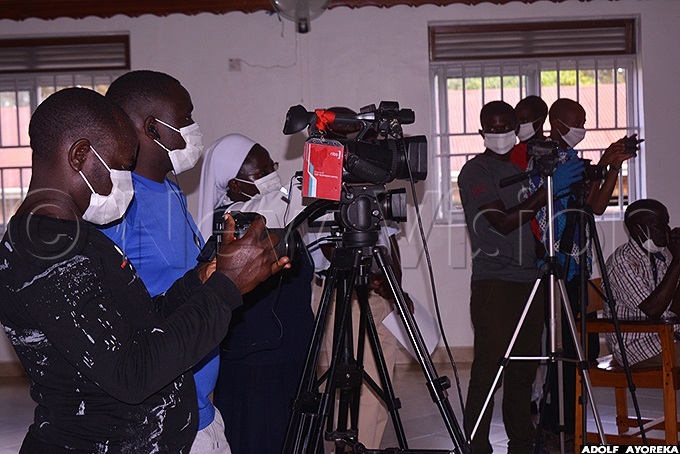 Journalists covering the press conference
He asked Ugandans to remain committed and resilient as they follow established government guidelines.
"We have come a long way. Our source of salvation is the crucified and resurrected Jesus let us not lose focus of him we shall conquer COVID-19." Bainomugisha articulated.
Who is Rt. Rev. Lambert Bainomugisha?
According to a statement by the Catholic Church, Rev. Bainomigisha was born on July 12, 1961, at Kashumba, Isingiro district.
He completed his secondary education at Kitabi Minor Seminary, Bushenyi. Rev. Bainomigisha then studied philosophy at St. Thomas Aquinas Major Seminary, Katigondo in Masaka.
He was ordained a priest of the Diocese of Mbarara on July 13, 1991, after having completed theological studies at St. Mary's National Major Seminary at Ggaba in Kampala.
Bainomigisha has a doctorate in Canon Law from St. Paul's University, Ottawa, Canada.
"He served as an assistant at St. Joseph the Worker Parish in Rubindi, Mbarara (19911994), chaplain at Corpus Christi Chaplaincy of Mbarara University of Science and Technology (2002-2003), and as the Chancellor of Mbarara Archdiocese from 2000-2005," reads the statement in part.
Rev. Bainomigisha was nominated as the Auxiliary Bishop of Mbarara with the titular see of Tacia montana.
He also received the Episcopal Ordination on October 1, 2005.
On November 13, 2009, he was nominated as the Apostolic Administrator of the diocese of Hoima, which responsibility he carried out till February 29, 2016.

BRICS to support to developing countries