Coronavirus crisis: It is time to hold out...
Next Story

As frontline health workers, midwives are particularly vulnerable to the virus which has killed over 233,000 people out of over 3 million it has infected worldwide.

Midwives wheeling an expectant mother in an ambulance at Nyakadoti Health Centre II in Kiryandongo district on May 4.

As frontline health workers, midwives are particularly vulnerable to the virus which has killed over 233,000 people out of over 3 million it has infected worldwide.

It was a rare case, which was handled by a team of experienced health workers led by a physician, an epidemiologist and two midwives.

"It was a beautiful but challenging situation to deliver such mother because of the COVID-19 threat," says Agnes Babirye a midwife who was part of the team that helped the patient deliver.

As frontline health workers, midwives are particularly vulnerable to the virus which has killed over 233,000 people out of over 3million it has infected worldwide.

"We were there panicking, but we did our best and succeeded. I was so excited to hold the baby and later give it to the mother," Babirye says.

Both the mother and baby were later discharged from the hospital free of COVID-19 after the mother was treated.

"As midwives, we put our lives at risk to save the mother and the baby. That is what we always do but on this, it was not easy," she says.

It should also be noted that when Entebbe hospital was designated to only handle Covid-19 cases several mothers had to find other facilities to deliver in.

The hospital was closed for deliveries which in itself was a challenge since some mothers kept coming to the same facility.

"There is a mother who we almost delivered at the gate, she was rushed in and we couldn't send her away. We had to look for things to use and made sure we keep here safe in a different room. She did not even come with anything, so we mobilized as health workers bought clothes for the baby," Babirye says.

It is midwives like Babirye and others that the world needs to celebrate today as the world marks the International Day of the Midwife 2020.

The day is being celebrated under the theme; "Midwives with women: celebrate, demonstrate, mobilize, unite - our time is NOW! The theme builds off the theme for the International Year of the Midwife 2020 - ‘Celebrate. Demonstrate.

World over, midwives have a key role to play as the global community strives to achieve the Sustainable Development Goals of reducing maternal and newborn mortality and ensuring universal access to healthcare services.

They also play a vital role in the gender equality movement; working to uphold women's rights to quality, and midwife-led care throughout the childbirth continuum.

Midwives, work with women every day, as they partner with them in their care and have a unique opportunity to get to know each other and to build trusting and reciprocal relationships through the continuum of pregnancy, labour, birth and the postnatal period.

Susan Nahiriya, a midwife at Nyakadoti Health Center II in Kiryandongo district says the coronavirus pandemic has proved a huge challenge to midwives in their bid to deliver quality services.

"There is a threat of COVID-19 which means we are to be protected and also observe social distancing with our mothers. But you can't maintain physical distance with a laboring mother which makes us disposed to the virus," Nahiriya says.

She explains that the pandemic is discouraging women from seeking essential services, including maternal health care.

"The number of mothers coming for deliveries and antenatal has dropped. Mothers are unable to move to the facility due to the ban on public transport. Few can afford hiring a car or boda boda," Nahiriya says.

In the month of April, only 534 mothers attended antenatal compared to 1,004 in February. Mothers who delivered at the facility reduced to 45 in April from 75 in February.

"Some mothers fear coming to the hospital because of the coronavirus threat," Nahiriya says. 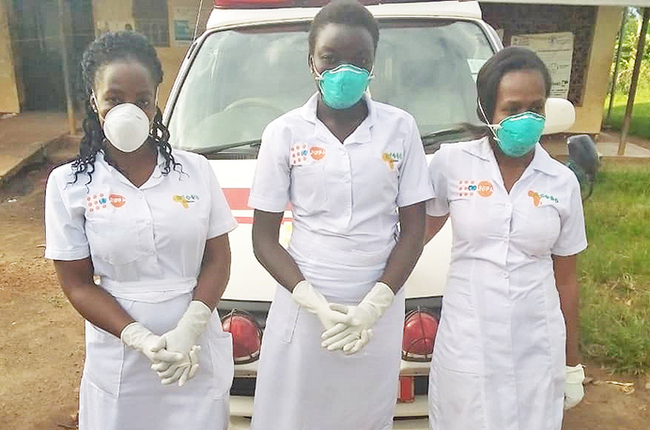 According to the District Health Information System, total deliveries in Acholi region have reduced from 12,406 in January to 3582 in March.

Despite such challenge's midwives have remained innovative and committed to ensure mothers get services.

"Majority of the mothers walk to this facility, so for antenatal care, we now have to work up to 6pm so that mothers can find us," Nahiriya says.

Although Nahiriya's facility has a few solar lights, it is not enough to light the ward, especially during the rainy season.

"We need hydro-electricity or a stronger solar system. Because of the rain, the batteries get drained so fast and we sometimes deliver mothers on torchlight," Nahiriya says.

Such sacrifice by the midwives can be witnessed in every part of Uganda, where they sometimes they have delivered mothers under torches, and offer transport and food to the mothers among others.

In Nakapiripirit Alice Akello, a midwife at Nabulenger Health Center II says they are currently lacking protective gear yet COVID-19 is a just patient away.

"I'm always scared because I might get the virus. But I continue working so that I save the lives of the mothers and babies," Akello says.

She notes that at her facility the number of mothers who come for services has remained the same.

"The problem here people were told that the elders performed rituals to stop the virus from reaching here. This is dangerous since people are socializing as usual," Akello says.

Amidst all this sacrifice she calls for respect for midwives who make sure lives are saved.

According to Alain Sibenaler, the UNFPA Representative, says, "Childbirth doesn't stop for pandemics, and neither do midwives. They are working tirelessly on the front line in maternity wards, health centres and women's homes around the world, risking their own lives and well-being to save the lives of women and newborns,"

Sibenaler notes that UNFPA applauds the work of all midwives, and pledges to stand by them, working with national governments to protect midwives from COVID-19.

On April 24, in Nebbi district, Joy Nyamutoro, a midwife attached to Olussi HCIII delivered a 35-year-old mother who was carrying triplets.

Although the mother had attended ANC five times at the same health Centre in this pregnancy, she was unable to access the health for the delivery because of transport.

However, she was lucky since the United Nations Population Fund (UNFPA) provided fuel, to one of the ambulances at Olussi HC III which picked her to the hospital.

The vice president of the Uganda Midwives Association Emily Likico Opu commends the efforts by her fellow midwives who are doing their job despite all the challenges they are facing.

"With or without Covid-19 we are here to save lives. But we need to be well supported by government and other stakeholders. In this period midwives need to be provided with protective equipment," Opu says.

She says midwives are very important in society since they also provide the information and contraceptive counselling that women and young people need, even in times of crisis.

"We are champions of maternal health and women's rights.  We offer support to survivors of sexual and gender-based violence, educate the community about harmful practices and benefits of family planning which are key in promoting gender equality," Opu says.

Although in some facilities there has been a decline in the number of mothers delivering in health facilities, at Mulago National Referral Hospital, where Opu works as a midwife, there has not been a big change.

"Women have kept coming like the normal days, there is no big change," she says.

Call for investment in midwives

According to the Ministry of Health, figures show that in Uganda, a midwife conducts between 350 and 500 deliveries per year; more than twice the 175 deliveries as recommended by the World Health Organization.

The number of midwives in practice is now 12,313 representing 74% midwives position filled as per staffing norm of the ministry of health.

"Government needs to invest in the lives of the midwives, we play a crucial role in maternal-child health. If we increase the number of midwives, two-thirds of maternal deaths will be reduced," Opu says.

She calls upon fellow midwives to remain committed to their profession and ensure good customer care for their clients.

To Babirye, she wants to see communities and other stakeholders respecting midwives.

"We save lives of two people, the mother and the baby but we are underrated. They should actually be paying us highly," Babirye says.

UPC wants govt to give food aid to fasting Muslims

Effects of COVID-19 on the social and labour sector