WHO says has no proof from US on 'speculat...
Next Story

Sunday Vision has learnt that the Auditor General and the Public Procurement and Disposal of Public Assets Authority (PPDA), are jointly carrying out fresh audits.

Sunday Vision has learnt that the Auditor General and the Public Procurement and Disposal of Public Assets Authority (PPDA), are jointly carrying out fresh audits.

The Government has lost billions of shillings at the Rural Electrification Agency (REA), under a project funded by the African Development Bank, in the Electricity Access Project, Sunday Vision has learnt.

The money was lost after REA's top managers handed to an Indian company, Larson and Turbro Ltd (L&T), three contracts for the construction and installation of electricity lines, at a cost of $33.6m (about sh128b). Sources say another qualified contractor, C&G Andijes Group Ltd, had quoted $22.9m (about sh87b) but was controversially disqualified.

REA is headed by executive director Godfrey Turyahikayo. In awarding the three contracts to L&T it is said the top managers effectively donated $10.7m equivalent to sh40b of the taxpayers' money, which sources say could build about 560km of 33kv lines, enough to electrify the West Nile region.

Lot 4, which is Kaliro, had proposed load centres along the 33kV Kaliro - Nawaikoke - Iyingo Landing site with t-off to Budini Mission - Saka Bridge in Kaliro district.

Efforts to speak to Turyahikayo on Thursday and Friday proved futile. He did not pick his calls but sent his agents to meet our reporter over the matter. The agents offered no answers. 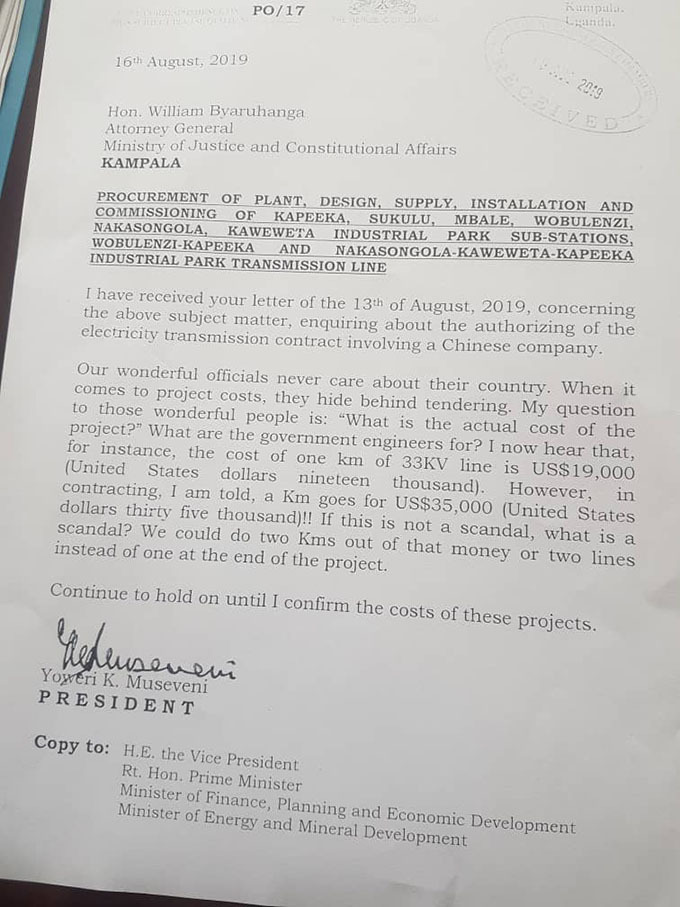 The letter was a response to Byaruhanga's letter on a separate contract for transmission lines on the procurement of plant, design, supply and installation of electricity under Lot 1, 2 and 3 for Kapeeka, Sukulu, Mbale, Wobulenzi, Nakasongola, Kaweweta industrial park sub-stations, Wobulenzi- Kapeeka and Nakasongola-Kaweweta- Kapeeka Industrial Park transmission lines. \

"Our officials never care about their country. When it comes to project costs, they hide behind tendering. I now hear that, for instance, the cost of one kilometre of 33KV line is $19,000. However, in contracting, I am told that the kilometre goes for $35,000. We could do 2km out of that money or two lines, instead of one at the end of the project," the President stated.

Sunday Vision has learnt that C&G Andijes Group Ltd had already implemented many REA lines, which are even bigger in scope and money. Notable among these lines were the over 300km flagship power lines from Gulu to Adjumani and Moyo, crossing River Nile at Obonji, with the highest tower crossing in the region. The other project was the 170km powerline from Mubende to Kyenjojo.

Sunday Vision has seen letters showing that Turyahikayo ignored the decisions and instructions of the permanent secretary of the energy ministry and board chairperson of REA Robert Kasande and the Public Procurement and Disposal of Public Assets Authority (PPDA) to re-evaluate the bids, but proceeded to award the contracts to L&T, having taken PPDA to the PPDA Tribunal. 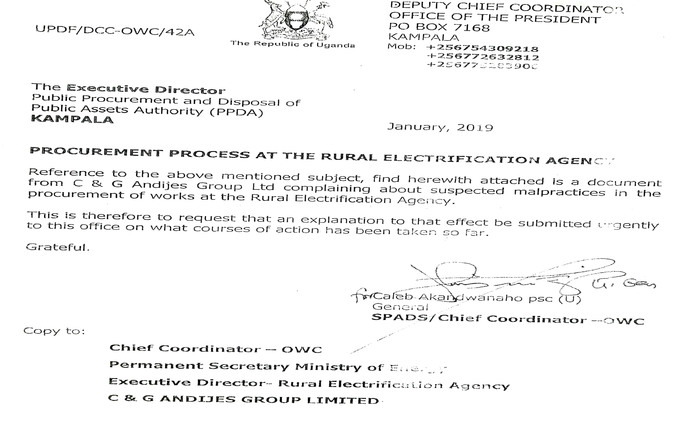 The documents indicate that the contract prices provided by L&T were above average market prices. For instance, a load break switch which costs on average $2,500 was quoted at $16,000, a metering unit costs as average $10,000 but was priced at $104,000, a kilometre of cable AAAC 100square meter costs, on average $1,200, but L&T quoted $2,250 per kilometer. Industry experts wondered why REA awarded the three contracts to L&T with all these inflated prices.

Sunday Vision has learnt that the Auditor General and the Public Procurement and Disposal of Public Assets Authority (PPDA), are jointly carrying out fresh audits on REA, spanning over 10 years, in the latest corruption probe that has hit the electricity agency.

The AG has set up a special team at the request of the Police's Criminal Investigations Directorate (CID), to probe the alleged inflation of amounts, among other inquiries, of project funds commissioned by REA.

The special audit will establish how much was lost in suspected fraud linked to alleged shoddy works that were supervised by key REA officials. This audit will also expose project consultants and engineers, among others, linked to a suspected high-profile syndicate that has been siphoning government funds.

According to preliminary findings, there were several inflations in bills of quantities leading to theft of funds by senior government officials, allegedly working in cohorts with some banks in Kampala. However, sources were cagey on naming the culprits.

According to Police sources, the audit is being done to enable prosecution and Police arraign in courts of law, culprits that could have mismanaged government funds that have sparked a cold war among REA officials, with others refusing to leave office, even when their tenure has elapsed.

Investigators said PPDA was also carrying out a forensic procurement audit. It also emerged on Saturday, that the finance ministry gave the Police a detailed explanation on funds sent to REA, which, detectives privy to the probe, are analysing with the help of experts. The energy ministry was also asked by the Police to send details of all projects and expenditures handled by REA.

Sunday Vision has learnt that nine months after L&T was paid advance worth $6million, the projects have failed to kick off. We spoke to some Members of Parliament who confirmed no work had commenced in their areas.

Margaret Mbeiza Kisira, the Kaliro Woman MP, said her area was one of those earmarked for the electricity supply, but that there were delays in the project. "They came on the ground in August last year, engaged the locals but there has been a lot of delays and, actually, I can confirm right now there is no work being done on the ground," she said.

Susan Amero, the Amuria Woman MP, said the lines were yet to pass through her district, yet this was a campaign promise.

Mary Goretti Kitutu, the newly appointed energy minister, said she was aware that the President had commissioned an investigation.

Kitutu said she would not tolerate incompetence at REA and questioned the decision by Turyahikayo to transfer projects to Lutwama and yet during his suspension, Eng. John Turyagenda had successfully renegotiated better terms for one of the contracts there and had provided value for money.

On March 26, 2020, Sunday Vision published a story indicating that the Criminal Investigations Directorate (CID) was conducting a series of investigations in REA. CID spokesperson Charles Twine confirmed that several people have been interrogated.

The details continue to emerge after President Museveni ordered the Police's CID boss Grace Akullo to probe REA, over allegations of corruption. CID is investigating cases of alleged extortion, abuse of office, false accounting, embezzlement, causing financial loss and conspiracy in which some REA officials are implicated.