MENU
How did golfer Otile make it to the high table?
Previous Story

UGU to rate all golf courses in Uganda
Next Story

Since starting out in 1990 after a brief stint as a caddie, Akope, now a professional, has enjoyed several moments on the course.

Deo Akope whips the ball into the distance a couple of weeks ago. (Credit: Michael Nsubuga)

Since starting out in 1990 after a brief stint as a caddie, Akope, now a professional, has enjoyed several moments on the course.

When Deo Akope set out to start the game of golf as an ambitious youngster over 20 years ago, he didn't know what the future held.

But the 41-year-old has scaled the golf scene and is now regarded as one of the celebrities of the sport that is still regarded in some circles as a rich man's sport.

Since starting out in 1990 after a brief stint as a caddie, Akope, now a professional, has enjoyed several moments on the course, But perhaps the most memorable one arrived in 2000 during the Uganda Open, when he matched the Kitante course record of 65 gross.

He opened his round with successive pars on holes 1 and 2, which he followed with consecutive birdies on holes 3 and 4. He would then go on to register an eagle on the par-5 hole 5.

Back-to-back pars on holes 6 and 7 set Akope on course, before he added another birdie and a par on holes 8 and 9, to finish the front nine with a tally of 32.

He steadily continued his perfect round with consecutive birdies on holes 9 and 10 and 11. He, however, found the troublesome hole 12 tricky, carding a double bogey on the hole to briefly get a setback.

But a birdie on hole 13 was followed by pars on holes 14, 15, and 16 that kept his dream of breaking the Kitante course record alive. However, a par on the 18 could only help him equal the course record that had been set during the colonial times.

Akope first stepped on the course around 1990 as a caddie during holidays at Entebbe Club, but his first competition was in 1997 in Mbarara.

"In a way, it is caddying that brought me in the game, but we only caddied during holidays. But later, having played for seven years, I had gained some bit of knowledge on how to play.

My actual competition, especially out of Entebbe, was at the Mbarara Open which was won by Kidega. I won Group A but Kidega was the overall winner there," recalls Akope. 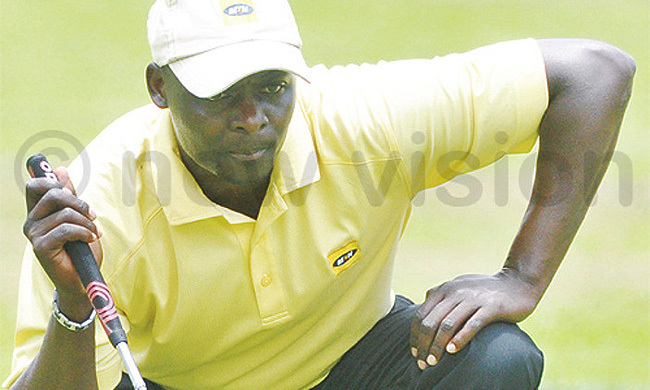 Akope has been keen on the sport since his early years

One of the best moments

Akope would then complete his own Uganda Open hat-trick in 2002, but his record-matching 65 in 2000 is the one that stands out for him. He is one of seven golfers to have won the Uganda Open at least three times since 1960.

"Definitely, that record-equaling round is one of my best moments in the game. It's a score that had never been seen in the golfing circles for some time. Even Onito who had played for a long time had never shot such a score," says Akope.

"But Kenya's Dismas Indiza broke it later with a 64, which I also re-wrote with a 63 that Kenya's Richard Ainley also matched later and it stands to-date.

"But I have played a 61, which wasn't official, but is my best ever. I achieved that while playing with Marvin Kagoro, Sam Byaruhanga and Pastor Garry Skinner around 1996."

Akope later won the professionals Uganda Open in 2006 and for the second time in 2014 to cement his position as one of the best talent Uganda has ever produced.

In between his pro career, he also won the Kampala and Arusha legs of the KCB East African Tour, with the latter also providing fond memories.

"My win in the Arusha leg of the KCB East Africa tour in 2011 is another moment to savour," says Akope.

"It was very interesting because I was playing in the pressure group alongside Kenya's Dismas Indiza and Richard Ainley, and I was 8 shots behind going into the last round. You can't believe, I pulled those shots and ended up beating Indiza and Ainley and instead tied with Simon Ngige, whom I beat on the first hole of a sudden death play-off!"

Akope, who slipped from his career-high world ranking of 1527 in 2013 to 2004 in 2018, was the first professional to attract corporate sponsorship, with a $24,000 (sh58m) annual deal from MTN to compete in the Middle East and North Africa (MENA) Sunshine Tour events.

He also coached the national team for over three years and boasts countless victories in Uganda and in the region, including making the cut on the highly competitive Sunshine Tour in 2012 in Zambia.

Entebbe course hole 17 is named after him and he says it was due to his efforts as an accomplished golfer over the years.

"First of all, they wanted to recognize my efforts and my achievements, so they decided to name one hole after me.

"Danny Nkata, who had transformed the course to an 18-hole facility, had gotten names of people for all the other holes, so I was also chosen because of what I had achieved in golf and sport," says Akope.

"But for him to give me that hole 17, he told me he had done an assessment for about three months when the course had been re-opened and he found that particular hole had challenged me; thus  the name ‘Akope Challenge'."

COVID-19: Guidelines for reopening schools out

Mixed reactions as some schools in Kabarole prefer not to reopen