Government hails media for fight against C...
Next Story

The flooding is attributed to shoddy works that was done by the Chinese road construction company CR3 that built the Moroto – Akisim road.

The flooding is attributed to shoddy works that was done by the Chinese road construction company CR3 that built the Moroto – Akisim road.

NAPAK - Kangole Town council in Napak district was on Friday hit by floods following heavy seasonal rains that have hit Karamoja for the last weeks.

The flooding is attributed to shoddy works that was done by the Chinese road construction company CR3 that built the Moroto - Akisim road. The Chinese company offered a bonus of over 10 kilometre of tarmac road segments in Kangole town council, Matany areas and the Napak district headquarters in Lokiteded.

Several offices at Kangole central police station, the records, district police commander, and child and family offices were equally filled with water, with the exception of the cells.

The Mt. Moroto regional police commander Gerald Twishime confirmed the destruction of case files. He described the incident as a setback in case handling. 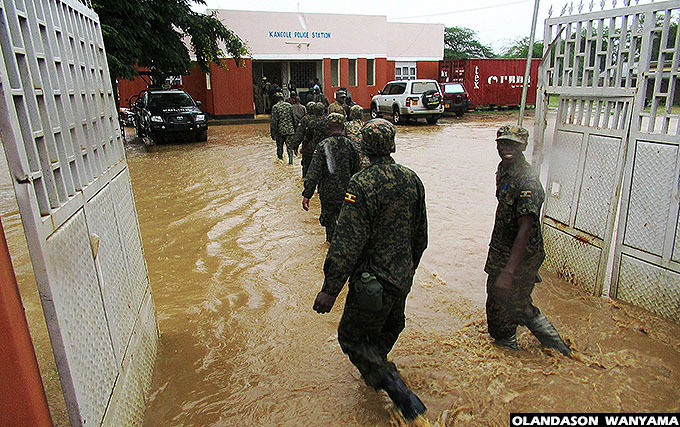 Also, high levels of stormwater swept through homes, carrying Jerricans, saucepans and clothes among items downstream in the nearest Omaniman river that meanders in the town council.

John Lomer, a resident of the Kangole told the New Vision that they had foreseen the problem but the Uganda National Roads Authority (UNRA) failed to come in and take charge.

"We have kept on contacting the authority but our plea fell on deaf ears," he noted

"Imagine my tenants lost all the property during the rain,' he said adding a lot of stored foods like sorghum, maize and green gram had been destroyed by the stormwater

Lochap said the situation could worsen if the rains continue in the next weeks, an issue he says worries the town council.

He appealed to the Chinese contractor and UNRA to find means of fixing sizeable culverts that can accommodate the high volumes of water.

Lochap said upgrading the town council with tarmac is what we have been longing for but it should not come with a cost to residents.

Mathias Achia, a resident of the town council accused the contractor of fixing undersized culverts adding that the channels cannot accommodate the water that spills over while it is raining.

At a nearby school (Kalatom Primary School), children lost beddings, boxes and books amongst other essentials to the high levels of stormwater that entered their dormitories. Most of the children left their belongings at the school thinking the lockdown will be short-lived. The Kangole Town Clerk Alfred Lowot Lochap could not be reached despite repeated calls that went an answered on his mobile phone.

The Resident District Commissioner Napak Hajji Kadunabi Lubega when contacted, confirmed the matter saying the situation could run out of hand.

He said he had contacted the Resident Engineer Ralph Ocan but his efforts were fruitless. "Before the road is handed over, the Chinese contractors should redo the disastrous drainage system," he said with concern.

Meanwhile, parents have asked UNRA to consider erecting road signs along the Moroto-Soroti road near Kalatom Primary School, the appeal comes in the wake of increasing accidents at the entrance of the school premises.

"We need humps, a Zebra crossing and a signpost showing there is a school ahead so that drivers can slow down," James Lopeyok a parent at the school said.