Printing and delivery of learning material...
Next Story

This is a vehicle largely built from local materials by the mechanics of Bakayiira Diesel Garage whose first experiment was the Uganda One that is also at their garage along Salama road.

It doesn't have a specific look but a cocktail of them - sedan, pickup and compact SUV.

The only feature that qualifies it as a pickup is the cargo bin which is smaller than that of a standard pickup truck.

The grille protrudes by a few centimeters and on it sits the Coat of Arm.

Below it on either side are round fog lights. Going by thickness, the doors look heavy but are actually light given they are curved from iron sheets and plastic.

Moses Kayiira, one of the mechanics explains that they used iron sheets to make the body and added plastic on top to reduce on weight and did the same with the bumpers, interior and roof to ensure it becomes as light as it is that two people can carry and turn it upside down.

Kayiira, adds that they drew the entire design on papers and picked the best.

The dashboard is built from plastic and plywood.
They sourced seat frames from other vehicles and dressed them up. It has a radio, functional instrument cluster, and AC.

The Uganda 2 is a manual transmission, 4WD pickup, ironically powered by a 1.6L engine.

Kayiira says that is so because they borrowed engine ideas from five vehicles.

"We got pistons from other vehicles and used them to create ours. When we were done doing what we wanted with the engine, it was a 1.6L and it is enough to power the vehicle," he explains.

It is capable of towing up to 500kg of cargo and is good on the fuel economy of doing 20km to a litre of petrol which he claims is much better than what the Japanese and other manufacturers do.

Joseph Nkaheza, a resident of Rwampara, Mbarara district in Western Uganda, and a mechanic. Spots a huge scar around his right eye and a few more on his head all from his misadventures with attempts to innovate.

His wrist bones on both arms protrude under the skin, a result of broken hands in the past.

A builder turned mechanic, says he has never attended a single school to become a mechanic because the last time he ever sat in school was for his Primary Leaving Examinations.

He has put together a quad bike - that is a cocktail of motorbike parts and a car design - and idea born when his friends at a garage gave him tyres to put on a plane - that is responsible for his scars and breaking his hands a few times - but he thought of something else to use them for, and so built the quad bike. It looks like a toy car from a distance. 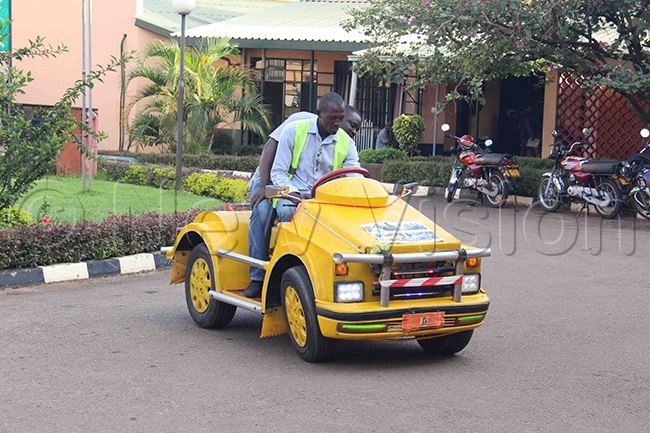 It is powered by a motorbike engine of a 125cc engine of Senke; a Chinese motor bike on which he added two more gears.

He notes though that the engine was still not powerful enough to carry people and sustain the weight of the bike itself.

So, he removed some of the original parts and added his to give it more power and increase speed.

Now it does a top speed of 160km/h and consumes one litre per 70km.

According to him, it ably carries four people and some cargo like matooke.

It has side mirrors and lights that he sourced from another bike, a digital speed-o-meter that he says he ramp up to a top speed of 160km/h, and the tyres almost went off.

The wiring, welding, and all the fabrication works he says he did single-handedly.

There is also storage space at the front where you can keep things you have bought like foodstuffs so they don't fall off or get snatched in traffic.

Nkaheza explains that he once tried to have URA register it but failed when they asked for the name of the manufacturer, and also argued that the materials used are from different sources.

To ensure safety after an incident at Kololo Airstrip during an exhibition where someone mistakenly started it and injured two onlookers, he changed it from manual to a smart key and therefore now without the keys, it can't start.

According to him, he uses this and the one for steam at weddings, always leading the entourage in Mbarara and some weddings at Serena Hotel where he is paid about sh100,000 to ride them around, go to church and back.

This is a locally built rally car. At first glance, it is metallic bars, poles in particular shapes on a frame, well painted with a few stickers on it as if to emphasize the activities it has graced, sitting on four, size 14 tyres with green painted rims.

No doors, but yellow nets and no windshield.

Joel Katongole, a motor vehicle mechanic based in Kisaasi with the help of his colleagues built this car, christened "Buggy" that has since been on rally tracks over three times.

He says they call it that because it does not have a real body but poles and is strictly used for rallying.

They started building it in 2015 and finished two years later.

Their inspiration was seeing something similar on the rally tracks at Busiika that wasn't well built in their opinion and so decided to come up with something better. 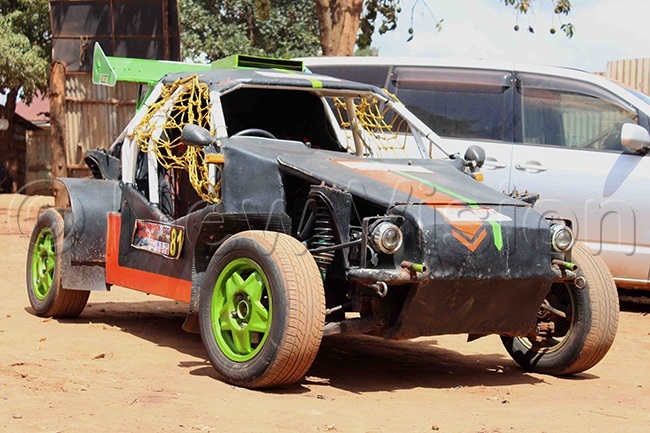 Katongole says they first built the chassis (frame), that they fabricated from metallic bars and poles, joining them together by welding, but due to resource constraints, work on it stalled for some time.

The chassis alone took them two months for that reason. After that, they put together the body - took them six months - factoring in modern car design essentials like aerodynamics.

They chose steel bars and sheets because they are strong enough to sustain the forces that are to be exerted on the Buggy given its purpose.

Derrick Lwanga, also a mechanic who is part of the team says they sourced the speed-o-meter from a Toyota ST190 and a 6 litre petrol engine from a Toyota Levin producing about 180 horsepower after the modifications according to Katongole.

Given the jolts and vibrations experienced by cars, shock absorbers are designed to take them in, but for the drifts done by rally cars, it only calls for stronger ones.

For the Buggy, Katongole says their friend from Dubai brought them brand new shock absorbers specifically for rally cars. According to them, the shocks may be similar to the ones found on the Toyota Land Cruiser, Harrier, and Altezza.

Unlike the ordinary cars powered by 1.6 litre engines covering about 16-18km to a litre, Katongole says the fuel economy of this car solely depends on the foot of the driver on the pedals.