Indigenous to modern-day southern Egypt and northern Sudan, Nubians trace their roots to an ancient African civilisation that eventually ruled Egypt during the 25th dynasty, some 3,000 years ago.

Nubian Egyptian women sell souvenirs in the village of Gharb Suhail near Aswan in Upper Egypt, some 920 kilometres south of the capital Cairo, on February 5, 2020. (Photo by Khaled DESOUKI / AFP)

Indigenous to modern-day southern Egypt and northern Sudan, Nubians trace their roots to an ancient African civilisation that eventually ruled Egypt during the 25th dynasty, some 3,000 years ago.

CULTURE | HERITAGE
Fatma Addar grew up in a Nubian family, connected to her ethnic minority's rich history through its tales of a bygone life on the Nile, though regaled less and less in their original language.
She lives in the southern Egyptian city of Aswan and was schooled mostly in Arabic -- her only occasional brushes with her mother tongue are when she hears it spoken by the family elders.
"I usually get asked how can I be Nubian when I can't speak my own language," the 23-year-old told AFP.
"It was always a problem for me."
The language, she says, is "unpractised by many in her generation", born decades after the mass eviction of Egypt's Nubians from their ancestral lands to make way for the construction of the Aswan High Dam on the Nile in the 1960s. 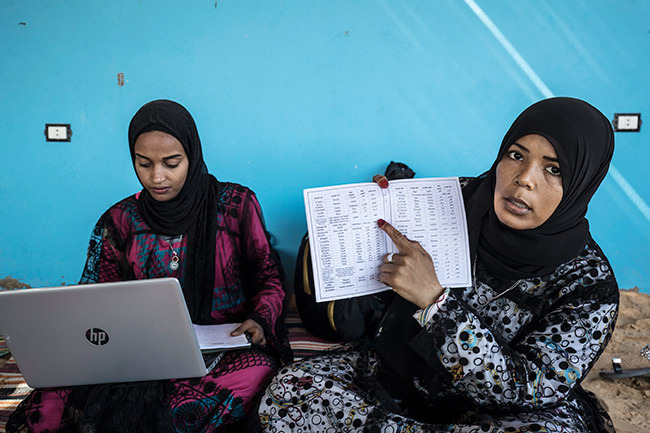 Hafsa Amberkab (R) and Fatma Addar (L), Nubian Egyptian women who compiled a handy dictionary of some 230 words in the Kenzi dialect, speak to an AFP journalist as they show off a Nubian lexical chart in the village of Gharb Suhail, near Aswan in Upper Egypt, some 920 kilometres south of the capital Cairo, on February 3, 2020. (Photo by Khaled DESOUKI / AFP)

Built under late president Gamal Abdel Nasser, the colossal projectaimed to harness the Nile's annual floods and provide electricity for the burgeoning nation.

But tens of thousands of Nubians were uprooted from their homes, according to rights and advocacy groups.
Their villages were then inundated by Lake Nasser, the dam's massive reservoir, and today, only a handful of Nubian villages remain close to the Nile banks, attracting tourists.
Since then, the ethnic minority has complained of systematic discrimination and cultural marginalisation -- and dreamt of returning to its lands and reviving its traditions and language.
A need that faded

Indigenous to modern-day southern Egypt and northern Sudan, Nubians trace their roots to an ancient African civilisation that eventually ruled Egypt during the 25th dynasty, some 3,000 years ago.
They built a life of lush verdant expanses, spacious domed mud-brick houses, clusters of palm trees, distinct customs tied to the Nile, and spoke their very own language.
But after their eviction, they were resettled in arid desert villages far from the Nile, forcing many to abandon agriculture and seek work in other cities across Egypt or abroad.
Traditions closely tied to life along the Nile have waned and younger generations have become less acquainted with their mother tongue that was never taught in local schools. Nubian boys lead camels along an alley in the village of Gharb Suhail near Aswan in Upper Egypt, some 920 kilometres south of the capital Cairo, on February 5, 2020. (Photo by Khaled DESOUKI / AFP)
Although there are no official figures for today's Nubian community, advocacy groups estimate its number to be three or four million, out of Egypt's 100-million population.
It is also unclear how many speak Nubian, a language that is not understood by non-Nubian Egyptians.
"Our integration into Arabic-speaking communities caused the need to speak Nubian to fade over time," Addar said.
'Cultural marginalisation'
In ancient times, Nubian was written using several different alphabets including Coptic, Greek, and Meroitic, according to academic studies.
But the written language was gradually abandoned and for centuries it was just passed down orally from one generation to the next.
Among Nubians, it has lived on in Egypt as two spoken dialects, Kenzi and Fadiji, and those who use one dialect do not necessarily understand the other.
During the 1973 Arab-Israeli war, the language was used as a military code after late president Anwar al-Sadat approved the idea put forward by a Nubian soldier.
But Nubians have sought to revive the written form of the language in recent decades.
Efforts have culminated in deriving a 24-letter alphabet, whose closest resemblance is the Greek one, according to Hussein Kobbara, a Nubian studies researcher.
"It is such a shame that this ancient language is not taught in schools or universities. It's clear cultural marginalisation that undermines our ethnic identity," the 63-year-old said.
Tales from the past

Fluent speakers and academics have recently started holding language classes for the Nubian diaspora living in cities like Cairo and Alexandria.
Others have applied 21st-century ways to boost the language, using online videos and mobile applications.
One Nubian entrepreneur, Hafsa Amberkab, launched the initiative "Koma Waidi" -- meaning tales from the past -- documenting stories told by elders and collecting dying expressions. 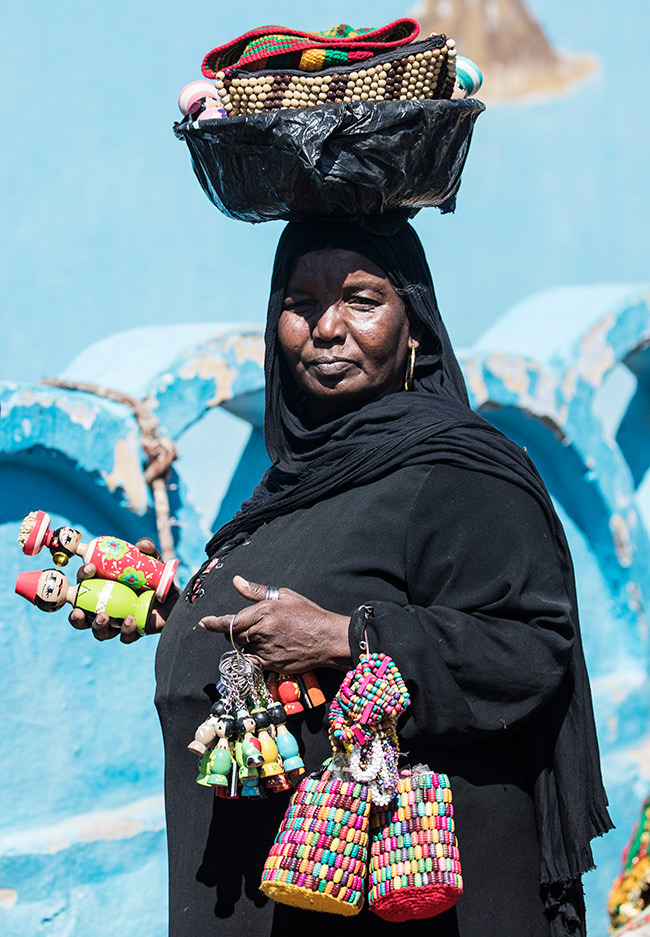 A Nubian woman sells souvenirs in the village of Gharb Suhail near Aswan in Upper Egypt, some 920 kilometres south of the capital Cairo, on February 5, 2020. (Photo by Khaled DESOUKI / AFP)
Helped by Addar, she has compiled since last year a dictionary of some 230 words in the Kenzi dialect, written using Arabic letters to facilitate pronunciation for readers.
It has also been transcribed into English, Arabic and Spanish.
"We derive the expressions, as we film old Nubians telling tales of their old villages and the customs they practised," Amberkab said.
One video shows an elderly woman carrying out an old ritual of baptising a child in the Nile waters seven days after he was born.
The woman calls on God to guard the child's footsteps as she wipes his face with the Nile water and sprinkles sweets in the water.
'Like returning without our souls'

In 2017, software developer Momen Taloosh created a mobile language learning application named "Nubi".
"I am not fluent, having lived in Alexandria all my life," said Taloosh. "But I belong to Nubia and I want the language to live on."
The application integrates the 24-letter alphabet and includes popular Nubian proverbs and songs in both dialects translated into Arabic, drawing some 3,000 active users and 20,000 downloads.
The songs include those crooned at weddings as well as others reflecting a deep sense of longing for the Nubians' return to their lands.
"My son, as you leave for the old village, remember me when you get there... and do not forget to greet it for me," are the haunting lyrics to one song.
Nubians have long called for a return to their ancestral lands.
In 2017, dozens set out on a singing march but the demonstration was swiftly crushed and at least 24 people were arrested.
Even before the eviction in the 1960s, smaller displacements had occurred in 1902, 1912 and again in 1933, to pave the way for the Aswan reservoir.
Egypt's 2014 constitution recognised for the first time the Nubians' right to return to their lands, setting a time frame that ends in 2024.
But so far the government has not taken any measures to deliver on its promise.
Instead, earlier this year, it announced compensation packages for thousands of Nubians affected by the 1960s dam construction.
It included providing social housing in other cities across Egypt, cash, or the option to benefit from the state's future development plans.
Those Nubians affected by the earlier reservoir developments have been offered ownership rights of the land where they currently live, or temporary rights to use and benefit from those lands if located along the Nile.
Activists insist however that such offers are no replacement for a right to return.
"This will always be the dream and we have to keep the language alive until we go back to our lands," said Amberkab.
"Otherwise it will be like returning without our souls."