The COVID-19 outbreak has disrupted global trade, including activities in the oil sector. The energy ministry says it is extending the deadline for licence issuance to September and it hopes that by then, things will have normalised.

Oil workers fixing an oil drill at one of the wells in the Albertine region. The Government will issue more exploration licences

The COVID-19 outbreak has disrupted global trade, including activities in the oil sector. The energy ministry says it is extending the deadline for licence issuance to September and it hopes that by then, things will have normalised.

COVD-19 | OIL SECTOR
COVID-19 is not only claiming lives, but also paralysing businesses in Uganda and beyond.
In Uganda, the oil and gas sector can only celebrate once the Government declares the country coronavirus-free.
The energy ministry has extended deadlines for the second licensing round to September 30, 2020. The decision, according to the ministry, was reached following the outbreak.
The development was confirmed by Frank Mugisha, the manager of the Second Licensing Round at the energy ministry.
In a telephone interview, he said: "Due to COVID-19, we have again extended the date for submission of applications in the prequalification stage to September 30.
"COVID-19 has significantly affected the oil industry in all aspects and the crude oil price is now less than $30 per barrel."
Mugisha said the target investors cannot bid for oil blocks around the world at the moment.
In addition, he said, the leading oil and gas companies across the world are not making investments to stabilise their financial flows during the hard times.
"We cannot tell when the situation will normalise and, therefore, companies cannot make commitments," he said.
Between now and September, Mugisha is optimistic that activities will have normalised and that many companies will be ready to bid for the oil blocks. "Again, most countries have either extended or cancelled their bidding rounds," he said.
James Muhindo, the national co-ordinator at the Civil Society Coalition on Oil and Gas (CSCO), said extending the deadlines is needed given the current situation.
"The oil and gas sector will be affected. Investors cannot commit funds at the moment. Internationally, companies are downsizing to keep afloat due to the coronavirus," he said.
MOVING TARGETS
This will not be the first time the deadline for the second licensing round is moved. The target was 2019 and later moved to March 2020 and now September.
This also implies that the targeted deadlines for signing  production sharing agreements and exploration licences for successful firms will be moved.
Earlier, the energy ministry had set December 2020 as the time to conclude processes under the round.
According to a recent status report, just six international and local oil and gas companies had expressed interest.
The above, the report noted, are  those that applied through joint venture partners for explorations.
As part of local content boost, he said the Government was recommending joint venture partnerships for local companies to develop capacity.
"Oil and gas explorations are capital intensive. Local entities may not have the needed technology and finances to undertake these operations, so we recommend joint venture partnerships," he said. 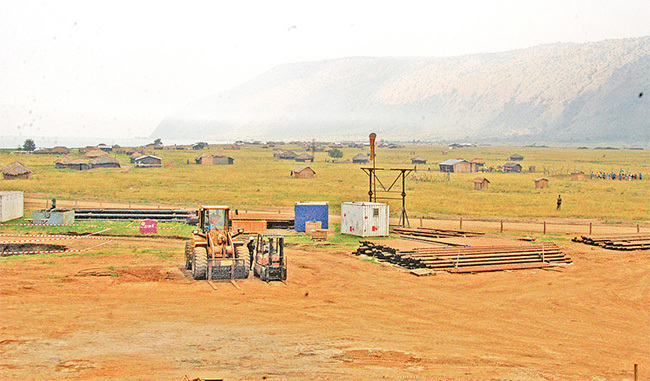 OBJECTIVES OF THE ROUND

The second licensing round involves five oil blocks ready to be explored in the Albertine region.
These are Ngaji, Turaco, Kasuruban, Omuka and Avivi.
All the blocks have seismic data coverage from past exploration. Technical analysis, according to the ministry, shows each block has positive net present value.
With this background, the second licensing round was realised due to a number of factors, including the establishment of Uganda's oil and gas resources.
The round is also intended to increase the country's oil and gas resource base, which is required to run Uganda's oil and gas expensive infrastructure such as the oil refinery and the oil pipeline.
At the moment, Uganda has 21 oil and gas discoveries with just 88% drilling success rate.
The discoveries represent six billion barrels of oil with about 1.4 billion barrels recoverable.
This is in Tilenga and Kingfisher oil development projects. The discoveries are estimated to last about 25 years.
Therefore, Mugisha explained, Uganda needs to undertake explorations to push the sector forward.
"We are set to have expensive facilities here, they need oil to be economically viable. As a ministry, we have to constantly undertake studies on the oil resources," he said.
Once commercially viable oil resources are discovered under the second licensing round, Mugisha said, it will result in increased production licences."The more the production licences, the more the country will benefit from its petroleum revenues," he said.
The Government has, to date, awarded nine production licences.
In 2012, the Government awarded a Petroleum Production Licensce (PL) over the Kingfisher field to China National Offshore Oil Corporation (CNOOC).
In 2016, five production licences over Mputa-Nzizi-Waraga, Kasamene-Wahrindi, Kigogole- Ngara, Nsoga, Ngege oil fields were awarded to Tullow.
In the same year, three other production licences were awarded over Ngiri, Jobi-Rii and Gunya oil fields to Total E&P.
According to Mugisha, the confirmation of commercial oil reserves in the country and production licences are the basis for the planned development, production, and commercialisation of oil and gas and the ongoing infrastructure developments such as roads, Kabaale International Airport, and industrial parks.
DETAILS ON THE AVAILABLE BLOCKS
Avivi is block one, and it covers an area of 1,026sq.km.
The block covers Obongi, Adjumani, Amuru and part of Arua district.
Omuka is the second block and it covers Nebbi, Nwoya and Buliisa districts and with an area coverage of 750sq.km.
The third block, Kasuruban, is the biggest with over 1,285sq. km area, covering part of Buliisa, Hoima and Masindi districts.
Turaco, which is the fourth block, covers the smallest area of 635sq.km in Ntoroko district.
The last oil block is Ngaji, which covers 1230sq.km in Kanungu, Rukungiri and Rubirizi districts.
According to the energy ministry, the five blocks will increase international investment in Uganda's oil and gas sector.
HOW TO APPLY
Inviting applicants is in line with the National Oil and Gas Policy for Uganda and the Petroleum Exploration, Development and Production Act, 2013.
According to ministry documents, interested parties can obtain further information and inspect the request for qualification (RFQ) document at their headquarters on working days.
The five blocks are available to potential applicants after going through the pre-qualification stage successfully.
However, entry into the prequalification stage is subject to prior payment of a non-refundable  application fee of $20,000 (about sh76.5m).
Upon clearance, the Request for Qualification documents are issued to applicants.
The application fee is deposited on the Uganda Petroleum Fund account, which is hosted by the Bank of Uganda.
Thereafter, the document says, the Request for Qualification can be hand-picked from the Petroleum Exploration, Development and Production Department in Entebbe or issued through email by the manager, Second Licensing Round.
"We have extended the deadline twice, but we are not extending it this time around," he said.
The exercise, he said, was supposed to have ended last year in December, but was extended after calls from stakeholders.

Chess stars in show of skill