Second Ebola death in DR Congo ahead of ho...
Next Story

A street child, also referred to as Talibe, walks down the road with his package of food and drink received from Village Pilote in Dakar on April 09, 2020

Street children in Senegal's seaside capital Dakar are flocking to a refuge north of the city, as coronavirus restrictions have made begging harder, and sleeping rough more hazardous.

Hundreds, if not thousands, of children and teenagers live on the streets in the West African metropolis of over three million people. They survive by panhandling, or from handouts from restaurants.

But since the arrival of COVID-19 in Senegal, normally tolerant city dwellers have become more suspicious of the street children, whom they suspect of spreading the disease. 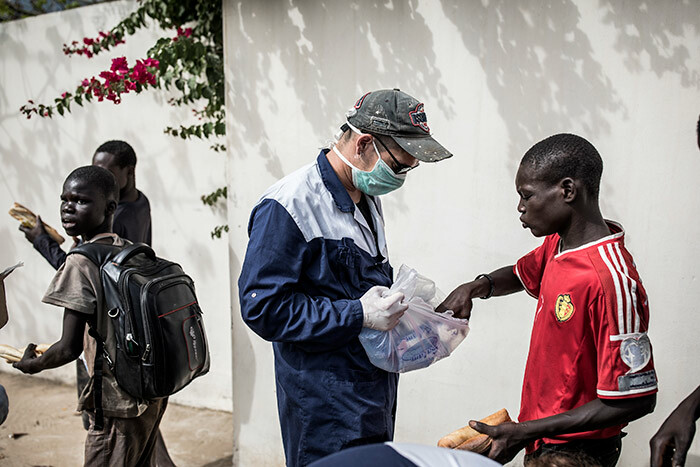 A worker from Village Pilote hands out water and sandwiches to Street children in Dakar on April 10, 2020.

Authorities have recorded some 300 cases of coronavirus in the country to date, with two fatalities.

He added that residents of the neighbourhood had started to mistrust the beggars.

A dusk-to-dawn curfew applies across the nation of some 16 million people, for example, presenting problems for rough sleepers.

Transport links between cities have also been cut, and many restaurants have closed their doors. 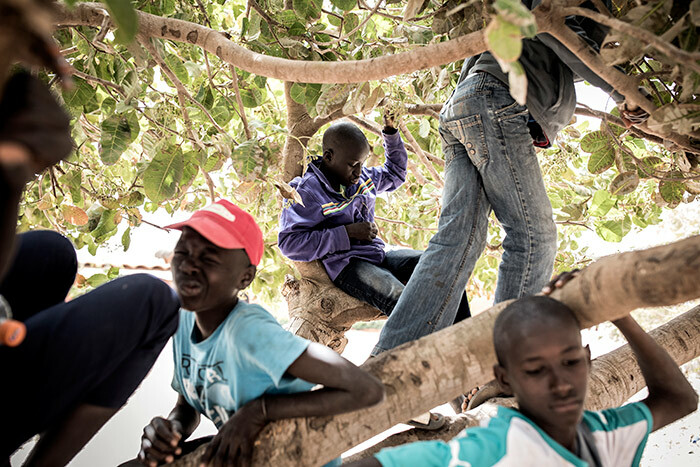 Young street children, also referred to as Talibe, are seen playing in a tree in a quarantined area at a refuge for newly arrived street children outside Dakar on April 10, 2020.

An official, who works at the children's charity Village Pilote, who declined to be named, said that street children are living in "torment" because no one is giving them anything anymore.

Despite being an economic bright spot in West Africa, Senegal is a poor country where about 40 percent people live on less than $1.90 (1.7 euros) a day, according to the World Bank.

Some of the children are leaving Dakar for a refuge run by Village Pilote, about 50 kilometres (31 miles) north of the city, to escape the misery.

"They are very tired," said Cheikh Diallo, another official at the association, describing how the rough-sleeping children "play cat and mouse" with police in Dakar after curfew falls. 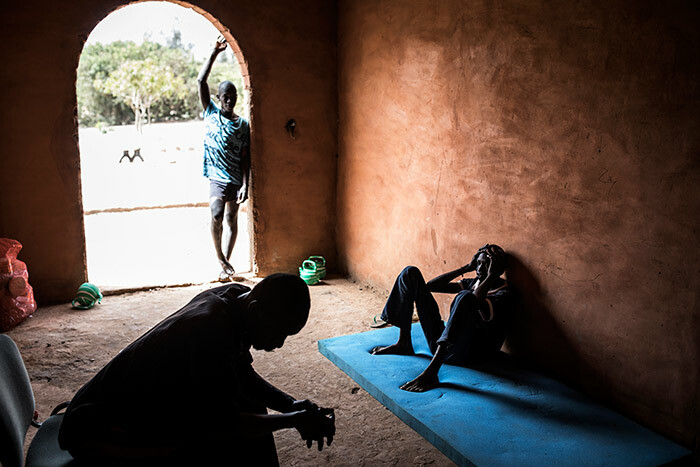 Young homeless men wait for a doctor in a quarantined area at a refuge for newly arrived street children outside Dakar on April 10, 2020.

The refuge itself covers a large area and has an air of a holiday camp, set amid dunes, baobabs and cheese trees.

Diallo said that when the virus first reached Senegal, the association shut its doors to newcomers in a bid to avoid infections and organised food handouts in Dakar instead.

But after children and teenagers with nowhere else to go began to turn up, they changed their policy. About 100 people have arrived in the past few days.

Village Pilote is still careful, however. New arrivals are quarantined for two weeks and younger and older children are separated. A nurse also takes their temperatures each morning. 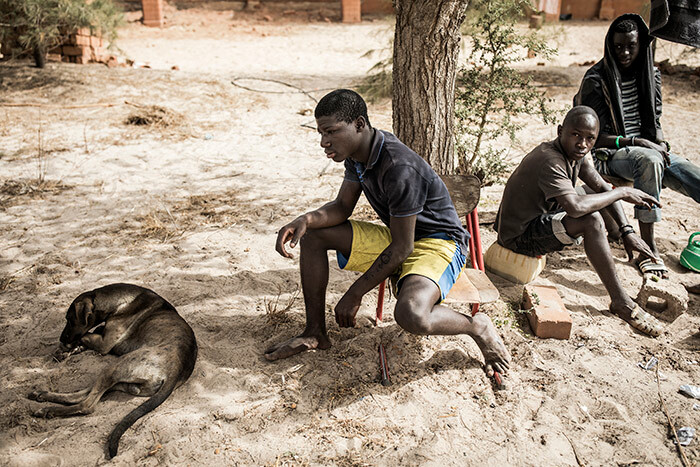 Homeless young men are seen with their dog, Lion, in a quarantined area at a refuge for newly arrived street children outside Dakar on April 10, 2020.

The rest of the time, the children lounge on mattress on the floor in ochre-coloured brick buildings.

Some of the older ones tattoo each other, while other children wash their clothes with well water, and others play rugby -- one of the specialities of the refuge.

Diallo said that many of the children turned to the streets after being kicked out by their families, or to escape abusive teachers in Koranic schools.

Poor children in Senegal are sometimes entrusted to these schools, called daaras, for education. The unregulated institutions often force the students to beg, and reports of neglect and abuse are common. 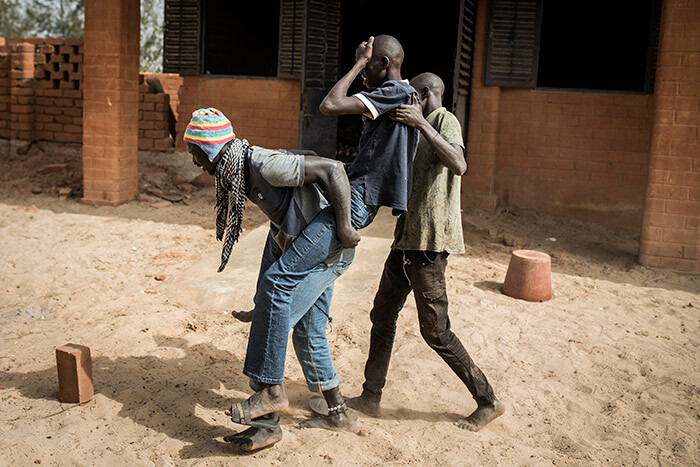 A young homeless man, who is thought to be suffering from malnutrition is carried to the clinic in a quarantined area at a refuge for newly arrived street children outside Dakar on April 10, 2020.

When the coronavirus crisis ends in Senegal, the children at Village Pilote will be free to return to their families, or to the streets if they so choose.

But they can also stay on at the refuge, to take reading classes, or to follow courses in subjects such as carpentry and mechanics.

Ansu Sane, a 19-year-old who until recently was an apprentice driver, is one of the older residents in quarantine at Village Pilote.

He said that the travel restrictions means he no longer earns any money.

Sane takes great care to wash his hands, and worries about his family. But he has a fatalistic attitude.

"If God wants me to catch coronavirus, there's nothing I can do," he said 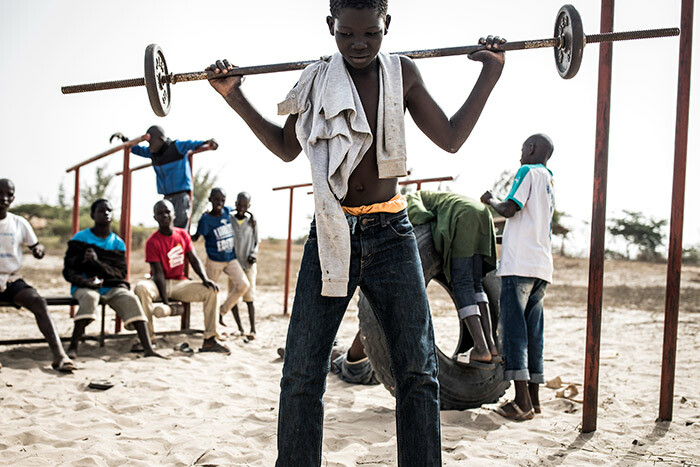 Young street children, also referred to as Talibe, play with weights in a quarantined area at a refuge for newly arrived street children outside Dakar on April 10, 2020. (Photos by JOHN WESSELS / AFP)