Mother burnt alive by her children over land

RWAMPARA - The Police in Rwampara district have arrested five people including a UPDF officer for setting their mother ablaze on allegations that she sold family land without their consent.

Rwizi region police spokesperson Samson Kasasira told new vision on Monday morning that the deceased was attacked by her sons on Saturday during the day and burnt to ashes.

The police also arrested the deceased's husband Rodgers Barimpa 57 and daughter in law Amelia Arinaitwe 30 whom they believe were also involved in the deal.

Kasasira revealed that the police visited the crime scene and found bloodstains in the room where she lived. In the banana plantation nearby, they discovered a burnt surface where Arimpa was supposedly burnt to death. Pieces of bones were recovered from the surface.

Kasasira said, "The bones were subject to forensic analysis."

He added that the preliminary findings show that the sons accused their mother of selling family land equivalent to an acre without their permission.

Similarly, residents of Kashengye cell, Kaburangire in Kakika division in Mbarara municipality were shocked on Easter Sunday when a group of bodaboda cyclists attacked the home of Justus Nabasa at midday and killed him on spot before setting his body on fire.

By the time police reached the scene, the mob had fled off 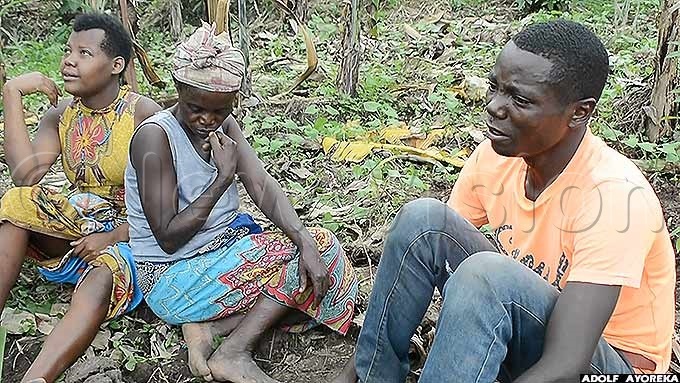 Relative of Nabasa seated in disbelief after the murder of Nabasa.

Mushuya Kakuru the LC1 chairman of Kashengye cell said Nabasa was a serial boda boda thief. "Boda boda cyclists have been looking for him until today when his 40 days elapsed.

However, the relatives to the deceased blame the Kakuru for the brutal death of Nabasa. They claim that the boda boda riders from Koranorya trading center were invited by Kakuru.

"We pleaded that since they have arrested him why can't they take him to police, Kakuru refused and decided to hand him to a mob that lynched him and set fire on him as we were watching," his brother only identified as Herbert said.

Kakuru denied the accusations. "After arresting him, I rushed to bring the police from Koranorya. However, upon arriving, the mob had already killed him.

Kasasira said the body of Nabasa was picked by police and taken to Mbarara regional referral hospital mortuary for postmortem.