Like the Biblical Widow who gave all she had to Jesus Christ, Samuel Kimbowa, a water vendor yesterday (Thursday) donated sh5,000 to the funding drive initiated by Government to fight Coronavirus.

According to the story of the Bible, the poor widow donated two very small copper coins, worth only a few cents. She was appreciated by Jesus more than the rich. "Truly I tell you, this poor widow has put more into the treasury than all others." Mark 12:42-43

Yesterday, Mary Karooro Okurut, the Minister of Guidance in the Office of the Prime Minister said her team had received Kimbowa's donation. 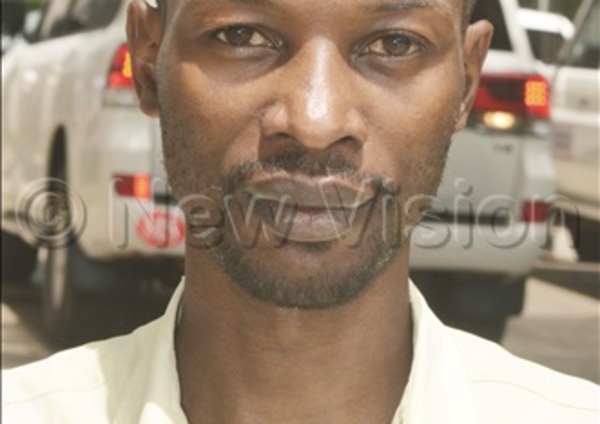 A father of four, Kimbowa lives and operates his trade in Kizungu zone in Makindye suburbs

Unlike others who had typed letters to accompany there messages, Kimbowa's letter accompanying his donation was handwritten. Kimbowa was well-kempt and tucked in his shirt.

But when she called for him to step on the podium for recognition at the high-profile event hosted at the Office of the Prime Minister, Kimbowa had melted away.

"Is he in the washrooms?" some people were overheard whispering. "He was around here but now he is nowhere."

This did not stop Dr Ruhakana Rugunda, the Prime Minister from clapping as the audience joined in appreciating the man who ekes a living out of water.

In his letter accompanying his donation, Kimbowa said "Our motto For God and My country. I got concerned about people who are not going to work and many who do not have food. That's why I decided to save and contribute, "

Kimbowa is following in the footsteps of John Lubega, the LC1 chairperson for Kireka who mobilized residents and contributed sh1m to the Government drive to fight COVID-19, according to Rugunda.

Okurut's declaration about Kimbowa's contributions came after the mightier in the land had contributed five vehicles and tonnes of maize flour, wheat flour, beans as well as protective gear. The vehicles included four brand new pickups and one fully equipped ambulance.

President Yoweri Museveni on Wednesday called on the private sector and philanthropists to contribute to Uganda's Health sector to fight COVID-19 by providing vehicles to transport health workers.

Mandela Group is one of the entities that promptly answered Museveni's call. They donated two Hilux pickups. 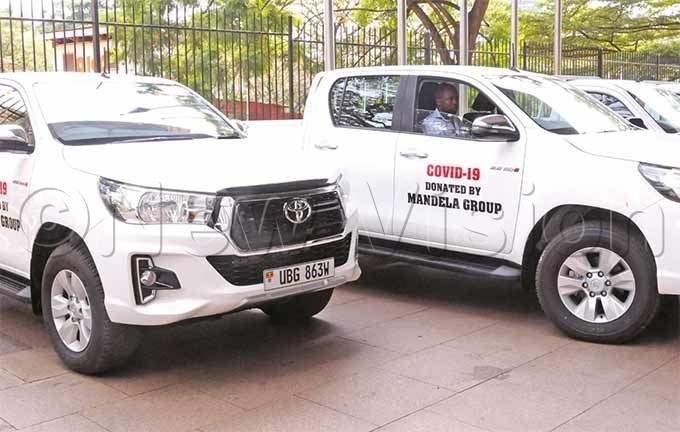 Ruparelia Foundation that was founded by property mogul Sudhir Ruparelia donated two Tata pickups. Sudhir did not attend the handover ceremony as he was reportedly in self-lockdown. 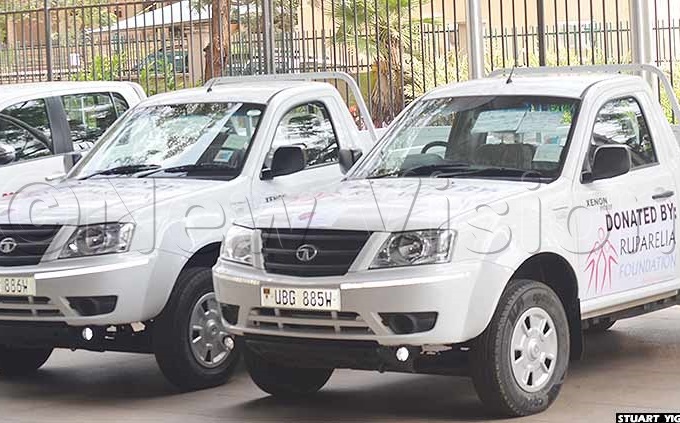 "We in this (fight against COVID-19) together and we know we shall win," said Ahmed Bongo, adding that the Government had created a good atmosphere to do business.

Tembo Steel Mills contributed a double cabin motor-vehicle and was received by the Office of the Prime Minister. 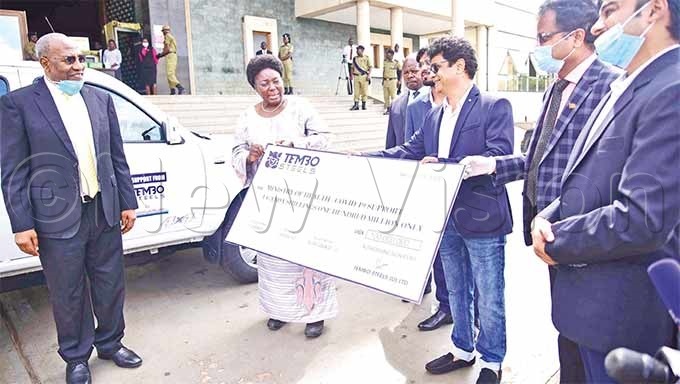 She said Hima Cement Factory had contributed an ambulance and Roofing had also provided oxygen which is also needed for life support systems in the treatment of COVID-19, according to Barbara Mulwana, the chairperson of Uganda Manufacturers Association.

Riham Group that also makes beverages donated a fully equipped ambulance. "We recognize that this fight is not an individual. So, it is important to Government efforts to fight COVID-19," said Hajji Tasser Ahmed, the chairperson, Haris Group of companies. 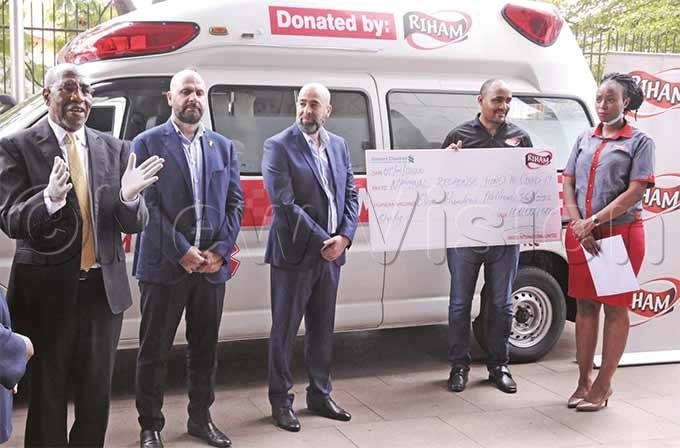 Riham Group also contributed up to Sh100m to the Government fund COVID-19, which Tasser handed over to Rugunda. Riham also provided cartoons of some of there products including water and biscuits.

Tasser also led the Lebanese community living in Uganda to handover sh200m to the fundraising drive. 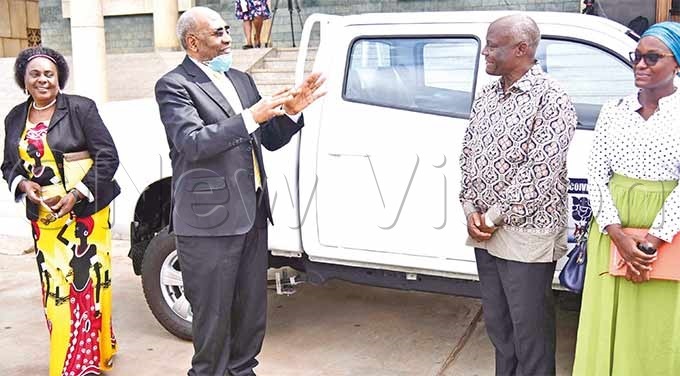 Diamond Trust Bank also donated Sh250m to support the efforts of the Government to fight COVID-19.

Pastor Bugingo of House of Prayer Ministries International also donated sh100m. "We are standing with the people of Uganda," said Bugingo. 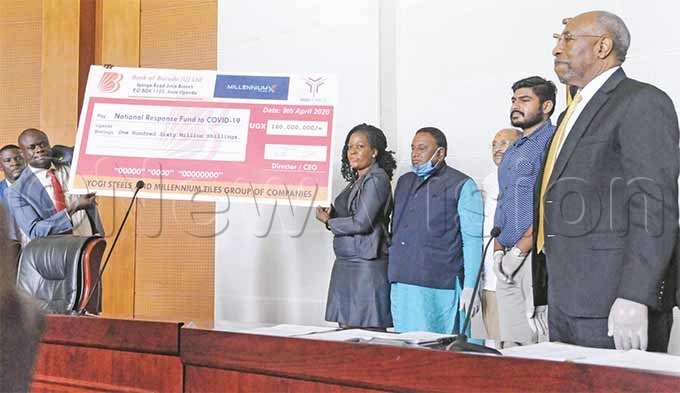 St. Caesar Augustine University contributed sh100m towards the drive to fight COVID-19, according to Caesar Mulenga. He also said that the university is already training 350 health workers under scholarship. 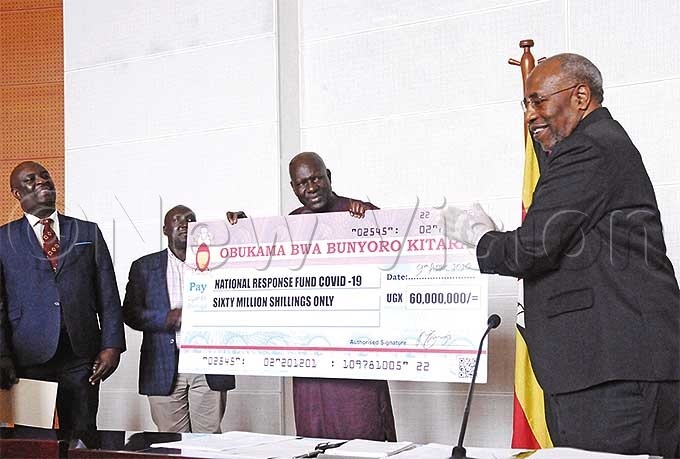 Barbra Mulwana, the chairperson of Uganda Manufacturers Association said some of there members had made their contributions directly but some of them contributed through UMA.

Crown Beverages Limited in partnership with its global franchiser's philanthropic arm, the Pepsi Foundation, on Friday, April 10, 2020, in solidarity with all Ugandans and support of President Yoweri Museveni's call to fight the corona Virus, provided a brand new 4 wheel double cabin and handed over a cheque of sh760m to the head of COVID19 National task force Hon. Mary Karooro Okurut at their headquarters in Nakawa. 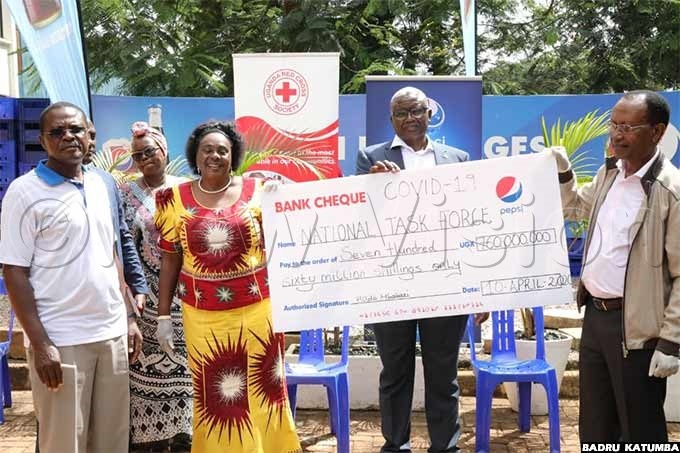 10th April 9, 2020: Pearl Dairy Farm Limited the producers of Lato Milk, donated UGX 345 million to the people of Uganda following the government call to the private sector to contribute to efforts against the COVID 19 pandemic.

Uganda's biggest milk processor donated 41,200 liters of liquid milk worth UGX 225 million to the Prime Minister's office and UGX 120 million to the Indian Association of Uganda.

Pearl Dairy Head of Sales, Nirav Patel said, "We are all concerned for the wellbeing of the people of Uganda during this crisis. Good nutrition is essential for both healthy people and those already infected with COVID 19 because it helps strengthen the body's immune system. 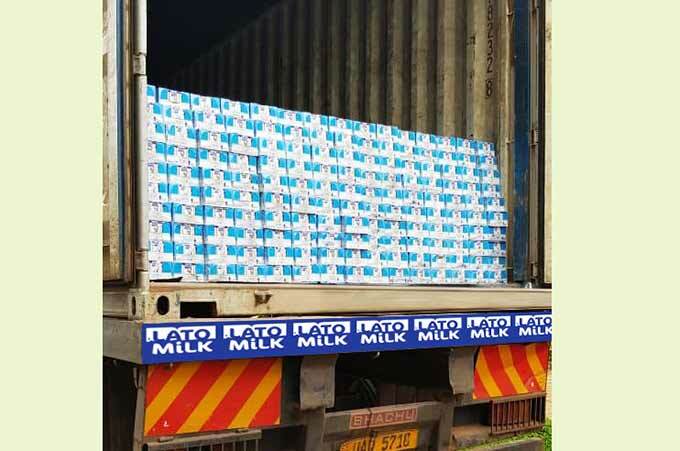 We know that milk is an especially important dietary component for the young. Therefore, Pearl Dairy Farm Ltd has taken this step to contribute towards this cause and demonstrate our commitment to this fight.

Many people will benefit from this donation as milk can help supplement other foods. With a glass of milk (200ml) one is assured to get calcium, protein, iodine, potassium, phosphorus, and vitamins B2 and B12."

He added, "We thank His Excellency, the President Yoweri Museveni, the Prime Minister Hon. Ruhakana Rugunda, the Ministry of Health and the government in general for accepting our humble contribution. 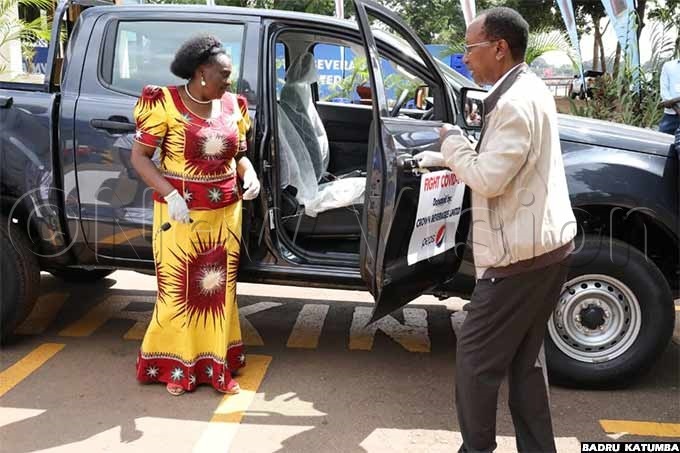 It is hard to predict what the future holds in these uncertain times, but we call upon the public to remain vigilant and adhere to the government and World Health Organisation directives in order to combat this pandemic and minimize the numbers of infections.

We as Pearl Dairy Farms Limited pledge to continue supporting the government and the general public as long as this pandemic persists."

Five vie for FUFA player of the year award

Mike Mutebi is favourite for coach of the year award