MENU
Man arrested for posing as a doctor
Previous Story

President Museveni stopped Ugandans from exercising in public to stem the spread of the coronavirus. He said he would show them how to instead do it indoors - and true to his word, he has released pictures and footage doing so.

President Museveni stopped Ugandans from exercising in public to stem the spread of the coronavirus. He said he would show them how to instead do it indoors - and true to his word, he has released pictures and footage doing so.

KEEPING IN SHAPE DURING CORONAVIRUS LOCKDOWN


If you thought he was kidding, now you know he wasn't.

Museveni said he would show the nation how he exercises indoors

When President Yoweri Museveni appeared on live TV shortly after 8pm local time on Wednesday to update the nation on the current coronavirus situation, he did not mince his words when he warned fitness enthusiasts to stop exercising in public and instead do so at home during this sensitive lockdown period.

While that directive may have sank in easily, considering the direction that Uganda has taken to stem the spread of this deadly virus, what could have easily been brushed aside as a joke was the President's promise to record himself doing exercises indoors and show that to the nation as a demonstration of his directive.

"I saw a video of so many people on the Northern bypass walking and running around that, they are exercising. This should stop. If you want to exercise, you can do that indoors. I will show you how it is done tomorrow [Thursday]. I will do a video for you," he emphasised his vow with this tweet.

From that time on, amid of an aura of eagerness, a debate ensued on various platforms over whether the President would or would not live up to his promise.

"I swear he will do it . He always sticks to what he says," came another's tone of confidence.

And the debate would go on and on - while the silent observers kept mum in their hideouts, only craning their necks out every once in a while, with muted interest, to check out the progress and highlights of the ubiquitous debate.

Well, a couple of hours after his declaration, President Museveni has come good on his word.

His senior press secretary, Don Wanyama, did well to whet the appetites of super-eager tweeps with this teasing tweet moments before the much-anticipated post:

The big one! The exercise demo. Coming to you shortly. Don't miss!!


And the wait did not last.

A few moments later, a Twitter notification popped up on my phone screen - and it was the one that I, like many other people no doubt, had been waiting for.

I scrambled to check out the update  - and voila! 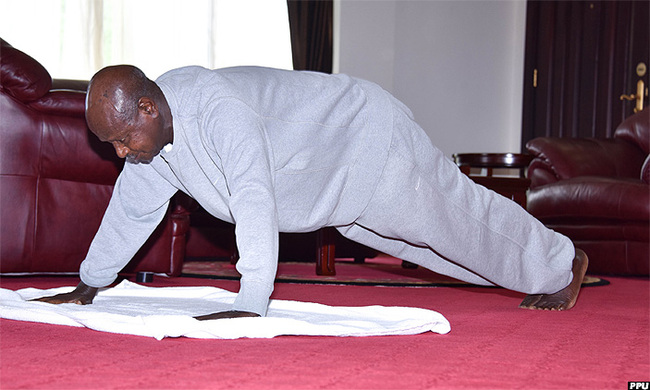 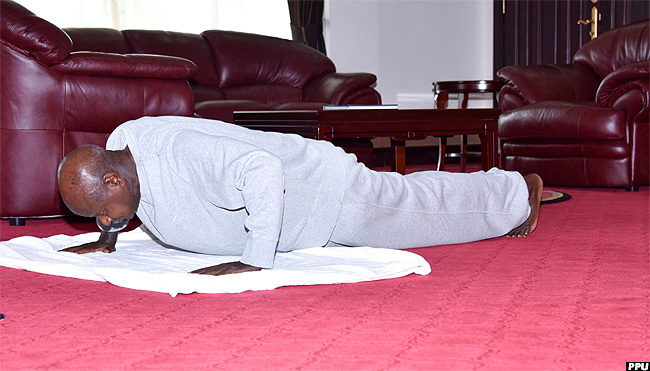 The starter of this visual meal features two pictures of Museveni wearing grey sweat pants - not the suits and shirts that you are accustomed to seeing him donning - and barefoot.

Here, he is frozen by his dexterous camera team doing pushups.

For a President who is followed by 1.4 million people on Twitter and whose Facebook page is liked by over 600,000 users, those posts went into swift circulation across the cyber in a matter of minutes!

The comments streamed in with as much fluidity. Users were full of praise for the Ugandan leader - and I have this sneaky suspicion that some of you felt quite put to challenge by the President. Yes?

Just like I had earlier promised, I started my day with indoor exercising. pic.twitter.com/vsTT9Ho6To


On Twitter, a few critical ones felt the President had given them a raw deal by not immediately posting a video as he had promised. But hey, for the main course (read, video), you would have to swing over to the President's Facebook page, where a 2.25-minute clip awaited you (watch the video at the bottom of this page).

[UPDATE: The President later posted the video on his Twitter page].

In the footage, the President, standing in his office, lets us in on his routine exercise regimen. "Because I do not have time, I normally do my exercises here [office] - or even in my room."

Against a musical backdrop of his hit 'You Want Another Wrap' to set the mood, Museveni starts off my warming up - trotting across his spacious neat office with an injection of the sort of seriousness the likes of elite marathon runners would input.

With so much ease, he does a couple of laps and once done, he tips that "you can do as many laps as you want".

He then goes down for the pushups. He steadies his hands like a pro atop a white towel, before raising and lowering his body using nothing but power of his arms. As many as 30 push-ups in total!

For a man of 70-plus years of age, that was very impressive, and many Bazzukulu will have been impressed - and at the same time challenged - by that display by the President.

So, you out there who was still doubting, you were saying? 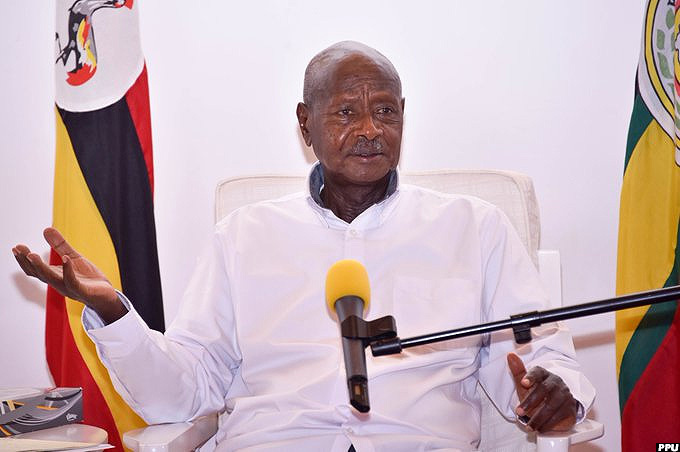 President Museveni promised to record himself exercising indoors. He has done so.

The President signs off in Kiswahili by re-echoing his warning: Leave that business of exercising in public!

Meanwhile, Uganda has 53 people confirmed to have the coronavirus, with no death recorded.

The number of those infected in Uganda rose by one on Wednesday after 214 samples were tested at the Uganda Virus Research Institute in Entebbe.

The health ministry said that that one new case is a 36-year-old female, resident of Wakiso district, who flew back to Uganda from China on March 21. It is understood she was under institutional quarantine at the time of testing.

The COVID-19 has infected more than 1.5 million people across the world, with more than 90,000 deaths registered. Over 340,000 are recorded to have registered.

Here in Uganda, the health ministry is saying: If you develop the following symptoms of  COVID-19 (fever, cough and difficulty in breathing), calmly isolate yourself and call the health ministry's toll free lines on 0800-100-066 or 919.


Below, check out President Museveni's video on exercising indoors: