Human activity to blame for virus spread: ...
Next Story

Kaweesi was shot dead, together with his driver, Godfrey Mambewa and bodyguard Kenneth Erau, as they were heading to Uganda Christian University in Mukono.

Kaweesi, Uganda People's Defence Forces (UPDF) spokesperson Brig Richard Karemire and Uganda Prisons Service spokesperson Frank Baine, had been scheduled to speak to students on the theme: Career opportunities in the armed forces and how to find them.

As he left his home, Kaweesi's car was trailed by armed bodaboda assailants. A short distance away from his home was another bike that had been stationed next to a junction, also carrying an armed assailant, waiting for the signal to strike.

According to eyewitnesses, when they had almost reached a road hump, the passenger on the motorcycle that was trailing the car opened his jacket, pulled out a gun and first shot in the air. He, then, shot through the behind windscreen of Kaweesi's Toyota Land Cruiser, registration number UP 4778. He also shot the car tyres to stop it from moving.

According to investigations, the motorcycle that was stationed at the junction joined in and they randomly opened fire on Kaweesi's car. Kaweesi is said to have been on phone, speaking to AIGP Abas Byakagaba, when the shooting started.

Byakagaba said all he could hear were gunshots and aloud cry from Kaweesi: "Abaana baange." (My children), before the phone went silent. 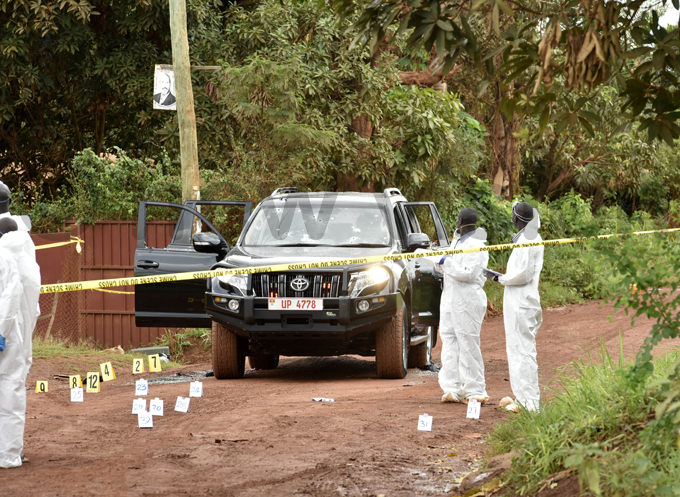 A forensic team combs the crime scene where Andrew Felix Kaweesi, his bodyguard and driver were gunned down.(File photo)

They then jumped on their bodabodas and fled the scene. Several top security echelons, including the then Inspector General of Police, Gen. Kale Kayihura; then security minister, Lt. Gen. Henry Tumukunde and Chieftaincy of Military Intelligence boss Maj. Gen. Abel Kandiho, rushed to the scene.

Several eyewitnesses interacted with both the intelligence and Police bosses as they tried to reconstruct the scene and share clues about the killers. On the same day, Police picked out close to six eyewitnesses, who were at the scene, for protection.

Shortly after, Police released composite images of the persons they believed were suspects, according to the description of the eyewitnesses. Police also retrieved key recordings of a CCTV footage, that was located at a supermarket not far from the scene.

The footages showed two motorcycles, with four armed men, fleeing the scene. Over 40 suspects were arrested, including civilians, Police officers and UPDF officers, in connection with the murder.

A total of 22 tortured suspects were produced in court, but Police failed to adduce evidence against them. As a result, the Nakawa chief magistrate's court released 19 of them on bail, but some were re-arrested on fresh charges of terrorism and treason.

Police also arrested Lt. Godfrey Musisi, together with his wife Grace, at their home in Namugongo, Wakiso district. Musisi, 54, is an ISO operative. He says he was severely tortured and that the Police had promised him sh1b to pin Lt. Gen. Tumukunde for the murder of Kaweesi.

The murder took a strange twist in October 2017, when several senior Police officers were arrested by the Chieftaincy of Military Intelligence, after a report by the Internal Security Organisation, linking them to the murder, was released.

The report has since been disputed. The arrested included Herbert Muhangi, who was the head of the Flying Squad; Nickson Agasirwe, who headed the Special Operations Unit (SOU), Col. Ndahura Atwooki, who headed the Directorate of Crime Intelligence (DCI) and Kayihura's former aide, Col. Peter Musherure.

Another suspect, Jonathan Baroza, who was Kayihura's aide, has since gone missing. Although Kayihura was arrested on June 13, 2018, from his home at Kashagama in Lyantonde district, he was not charged with the murder of Kaweesi. His accomplices were also not charged with the Kaweesi murder. He was instead charged with failure to protect war materials before the General Court Martial in Makindye, Kampala.

The National Security Council sub-committee recommended fresh investigations and analysis of an audio voice recording, said to belong to Gen. Kayihura and the former Flying Squad Unit head, Herbert Muhangi, linking them to the murder.

In the contentious audio tendered to the committee by ISO, Kayihura was reportedly recorded asking Muhangi whether Kaweesi was really dead, to which Muhangi allegedly responded: "Yes, yes."

In an interview with Sunday Vision, ISO boss Kaka Bagyenda insisted that Kaweesi was killed by his Police colleagues, who took time to delete critical evidence linking them to the murder.

The probe into the murder of Kaweesi took another twist in October 2017, when Police and ISO clashed over the protection of Christine Muhooza Mbabazi, who was Kaweesi's alleged mistress.

Although Police deployed, seeking to guard her, Kaka refused, saying his investigations had shown that Mbabazi had vital information regarding Kaweesi's murder and that some people could harm her. Her protection was later taken over by the Special Forces Command, under the directive of President Yoweri Museveni.

There have been a series of investigations into the murder, but to date there has been no conclusive findings on why and who killed Kaweesi, Erau and Mambewa.

Even though the footage from the Closed Circuit Television (CCTV) cameras at a nearby supermarket in Kulambiro, that recorded the assailants, was collected by Police, it has since gone missing.

Recommendations by the NCS endorsing further investigation by the British Police - the Scotland Yard, have also not yet been put to effect. A day before Kaweesi was killed, President Yoweri Museveni had reportedly directed Gen. Kale Kayihura and the former Director of Public Prosecutions (DPP), Mike Chibita, to investigate the murder of city businessman Wilberforce Wamala.

Wamala was killed at his home on February 3, 2012. In 2015, one of his widows, a UK-based psychiatrist Elizabeth Kigozi, accused Kaweesi of obstructing investigations.

This was after the prime suspect in the murder, Hassan Ssali, was found dead, hanging in a Police cell at Bukasa Police Station, where he had been briefly detained. Could those who felt aggrieved by the Wamala murder have planned Kaweesi's killing?

Sources in security say as the first Kampala Metropolitan Police Commander and, later, director of operations, Kaweesi was sucked up in the power and money fight that had dominated the Police at the time.

He was reportedly in charge of protecting several fraudulent city traders. His name was, for instance, cited in many property evictions. A case in point was the illegal demolition of a government building in Jinja.

Kaweesi's name surfaced at the Commission of Inquiry into Land matters headed by Justice Catherine Bamugemereire, where senior Police officers were appearing in relation to the eviction of tenants and demolition of a building on Plot 60/62 Aldina Road in Jinja town.

The Commission was investigating claims that Police officers were bribed by Birus Properties, managed by Simpson Barungi, to superintend over the demolition of the building owned by the Departed Asians Custodian Board.

The officers, led by Assistant Commissioner of Police Julius Twinomujuni, told Bamugemereire that Kaweesi, then serving as Police director of operations, ordered them to enforce a purported court order.

Twinomujuni told the commission that Kaweesi had sought advice about a document he purported to have been an eviction order against Alidina Twegayite Association, who were the tenants in the building Kaweesi had also reportedly handled Birungi's other evictions in different parts of the country.

He is also said to have protected most arcade owners downtown, Kampala. Sunday Vision also learnt that his special status created a rift among senior Police officers and that his death could have, perhaps, been caused by a rift in sharing the proceeds from such operations.

Shortly before Kaweesi's death, the Uganda Police Force had received a huge compensation from the Uganda National Roads Authority, for the Nsambya land for the construction of the bypass.

The money was reportedly banked on the Police accounts, but diverted for the construction of apartments at the Police headquarters, to help solve the housing problem.

Sources in Police told Sunday Vision that a fight among top Police bosses about the decision that the Crime Preventers Movement, that had been seconded to handle the construction of the apartments, created an uproar among senior Police officers and that Kaweesi was among those who did not want the lucrative tender handed over to them.

Crime preventers had reportedly already taken the contract for supplying food to Police officers, where billions of shillings meant for food were reportedly diverted. Kaweesi was also opposed to this and sources say it could have led to his death.

Some suspect that his death could have been engineered by elements from a neighbouring country, who are also accused of operating an assassination squad that had penetrated the Police. His death came shortly before security arrested some senior Police officers over claims that they had illegally extradited some suspects to a foreign country.

Three years on, Kaweesi's murder remains unsolved and family and friends say those who have been trying to pressure for the arrest of the suspects have been threatened. Lwengo district chairperson George Mutabaazi confirmed to Sunday Vision that he had been threatened several times.

Police spokesperson Fred Enanga, however, said they were still pursuing the matter and that some suspects were in court, even though they had been released on bond. "The matters are before court and the case has not yet been dismissed," Enanga said. The family awaits justice.