Father walks 200km to see family due to lo...
Next Story

Gazetted as a wildlife reserve, Apaa, home to mostly the Acholi, has been a hotbed of land conflicts, leaving many dead.

Located in Adjumani district, it is not only grappling with uncertainty but the lack of social services as well, writes Arnest Tumwesige.

It is a Tuesday morning and vendors aboard trucks carrying various merchandise from Adjumani and Gulu districts are flocking to Apaa market.

At the border of Adjumani and Amuru districts is a roadblock jointly manned the military and Police.

The Police officer manning the checkpoint stops every vehicle heading to Adjumani.

If you are a politician, activist or journalist, your journey ends here, lest you snoop around for information in the hotly contested Apaa.

Apaa village, which has about 30,000 residents, was in 2015 carved out of Labala parish, Pabbo sub-county in Amuru district amidst protests.

The land, mostly occupied by the Acholi, now falls under Mungula parish, Itirikwa sub-county in Adjumani.

Since 2007, residents in the area have grappled with accessing services. The situation worsened when the Government opened the boundaries between Amuru and Adjumani districts.

The residents allege the dead were killed by government forces and the Madi, either during the evictions or inter-tribal clashes.

The once busy Apaa Health Centre II is now covered in bush. The leaders say it was difficult to conduct the recent immunisation exercise against measles and rubela in Apaa.

The residents rejected services from Adjumani health workers, warranting the intervention of authorities from the two districts — Adjumani and Amuru — in order to get the exercise done.

Previously, the village had five boreholes, but today, only one is functional.

Abola says people now draw unsafe water from streams and swamps. "I am sure that the majority of my people here have health-related ailments because of drinking unclean water," Abola says. 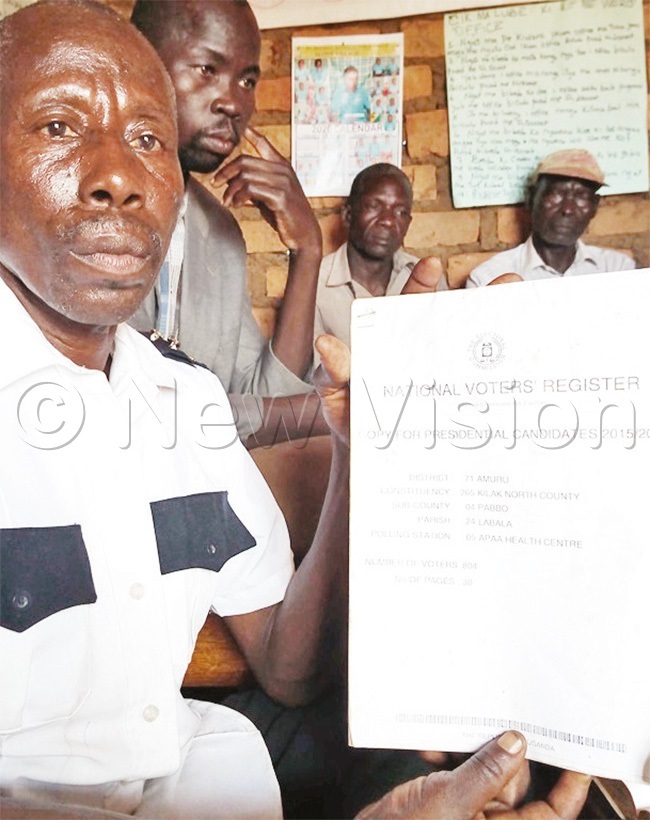 The village has 13 community primary schools, with an average enrolment of 200 pupils.

Redento Okot, the headteacher of Apaa Primary School, which has an enrolment of 300 pupils, says the school has not been improved despite having been opened in 1975.

The school, which runs from Primary One to Primary Seven, has two temporary sheds and a semi-permanent structure with an iron sheet roof supported by wooden poles.

"The school was closed during the Lord's Resistance Army insurgency but was later re-opened after the end of the war. However, developing it has been difficult due to the uncertainty caused by the land conflicts," Okot explained.

Even without a Uganda National Examinations Board centre, the school continues to enrol Primary Seven pupils, with the hope of registering them at Layima Primary School in Pabbo sub-county.

"We have many pupils in the community, but parents think that the school will be demolished anytime. The regular disturbance from the Uganda Wildlife Authority (UWA) has discouraged parents from enrolling their children," Oringa Olego, a teacher, notes.

A recent report by the parliamentary select committee indicates that Apaa trading centre is 8km inside Adjumani.

According to Leku, the recent findings by a team led by Pallisa Woman MP Agnes Ameede match the two recent reports by Parliament that Adjumani border is not at River Zoka, but 10km towards Amuru.

The contested land, which measures 827sq.km, is alleged to have been gazetted by Parliament in 2002, to form part of East Madi Wildlife Game Reserve.

However, the residents, who according to UWA should be evicted, have remained defiant.

The closure of Apaa market by UWA in May 2019 did not bar the vendors from violating the directive despite the district allocating 7km2 for a market at Zoka trading centre.

"The Government insists that this is a game reserve, but we have never seen any wild animal here," residents say.

James Leku, the Adjumani district chairperson, says they were aware that Apaa is located in East Madi Wildlife Game Reserve and, as a result, it is impossible to construct a health centre and a school in such an area.

"The district plans to construct a primary school and a health centre III at Zoka trading centre before the end of the year," Leku adds.

On whether the residents would make use of the facilities, Leku said it was up to them. "It is the responsibility of the Government to provide services and it is up to the intended beneficiaries to make use of them," Leku said.

Jervise Oneka Atunya, 79, whose national identity card indicates that he is a resident of Apaa village in Amuru district, says they are being dehumanised.

The Electoral Commission closed the area's three polling stations — Apaa Primary School, Apaa market and Apaa Health Centre — under the pretext that Apaa is in a game reserve.

"Seven new polling stations at Akee, Punu Dyang and Oyanga community primary schools and at Teber, Wee Yo, Tee Olam and Juuka markets should be gazetted. Otherwise, our right to vote will be violated if the polling stations are closed," Ferdinand Ojera, a resident said.

Doreen Alonyorowt
Since the closure of the only health centre, it is hard for pregnant mothers to attend antenatal clinics.

Francis Owoo
Vendors pay unnecessary charges at checkpoints. For trucks they range from sh50,000 to sh200,000.

Christine Oroma
I have lost property since this struggle started. Given that, I am not ready to leave this land. I would rather die.