COVID-19: Traders back on Kampala streets
Next Story

The Municipal Town Clerk, John Behangana accordingly indicted the two officers in a letter on March 30 and assigned the Municipal Senior Accounts, Assistant Florence Nansubuga to take over the duties as in acting capacity.

The Municipal Town Clerk, John Behangana accordingly indicted the two officers in a letter on March 30 and assigned the Municipal Senior Accounts, Assistant Florence Nansubuga to take over the duties as in acting capacity.

The Masaka Municipal Council Principal Treasurer and the Cashier, Saudah Namuleme and David  Sserubiri have been indicted in connection with embezzlement, abuse of office and causing financial loss to the Municipal Council.

This follows a directive from the Permanent Secretary Local government, Ben Kumumanya dated March 27 addressed to the Masaka Municipal Town Clerk instructing him to interdict the duo from office.

"As you are aware that the Ministry in conjunction with the Uganda Police force is conducting the investigations into allegations of abuse of office, embezzlement, and causing financial loss to Masaka Municipal Council," he said.  He said the malpractices occurred during the financial year 2019/2020. 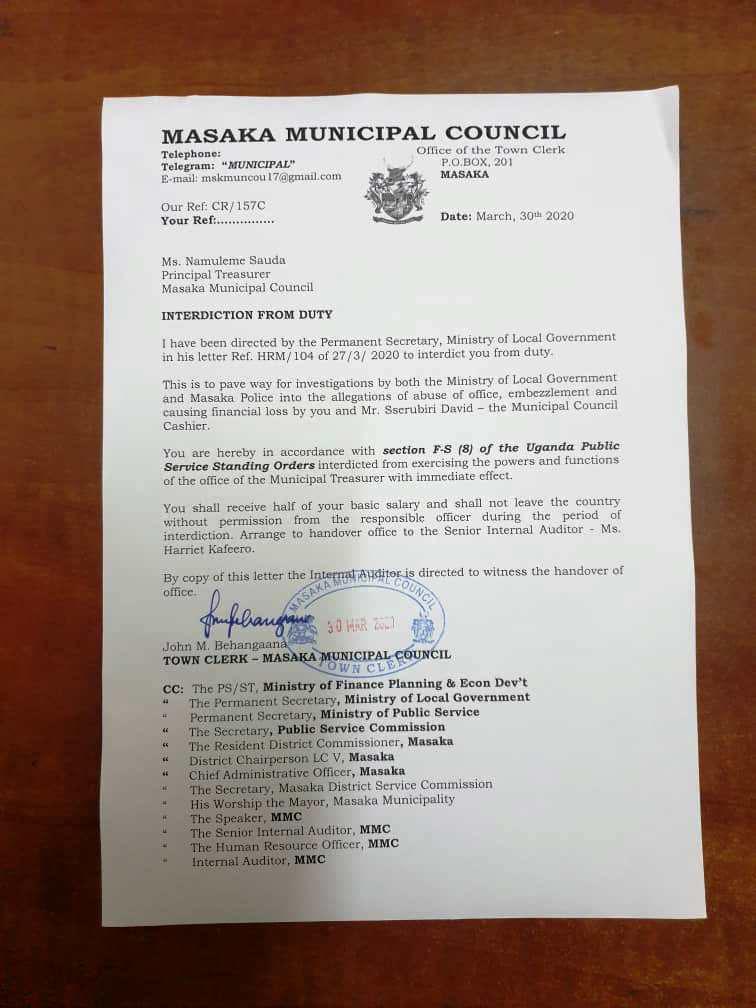 The Municipal Town Clerk, John Behangana accordingly indicted the two officers in a  letter on March 30 and assigned the Municipal Senior Accounts, Assistant Florence Nansubuga to take over the duties as in acting capacity.

Behangana said  Namuleme was initially indicted last month over the funds allocated for the construction of the Municipal Town hall and was also arrested in connection with an illegal secret account for local revenue collections.

Namuleme was briefly reinstated in office on an interim court order from the office of the Masaka High Court Registrar where she petitioned describing her indictment as unfair.

Shortly after her entry into office, Police arrested and detained Namuleme at Masaka Central Police Station on March 27 on fresh charges related to the secret account she opened with the Municipal cashier David Sselubiri.

Offences related to embezzlement, forgery and causing financial loss to Masaka Municipal Council were opened up against Namuleme at Masaka Central Police Station where she was released on police bond on March 28.

The New Vision learnt that initially State House Anti-Corruption Unit and office of the IGG are among the other institutions investigating related matters.

Tindizirarira said the finance and Local Government Ministry had rendered it illegal to operate another Municipal account outside the authorised Treasury Single Account (TSA). He noted that the finance ministry had earlier instructed municipal councils to close down other local government accounts in 2014.

He said the former Masaka Municipality Town Clerk, Joseph Kimbowa officially communicated to Stanbic Bank on March 28, 2016 instructing the bank to close down other municipal accounts that had been rendered irregular.

Masaka Municipal School Facilities Grant (SFG) project was among those which were closed by then.

The local government ministry probe team discovered that Namureme was still operating the secret account for the Municipal Council within the last four months. Funds collected from local revenue sources meant to facilitate service delivery in the three divisions of Masaka Municipality to a tune of Sh120m had been deposited in the secret account.

However, Behangana said he was not aware of the said account operated by Namuleme and any other related transactions. Some of the funds from the Municipal divisions deposited on the said account were from local revenue collections including, property tax.

It is said that  Namuleme and Sselubiri made the latest withdraw of sh 51.9m on the said secret account on March 9 according to the bank statement print out seen.

He said it was strange for Masaka High Court to reinstate Namuleme in office after she was interdicted. "Keeping Namuleme in office would complicate the investigations, it would be proper for her to step aside first to pave way for a thorough inquiry without any interruptions," he said.

He said the district recommended for the interdiction of Namuleme and immediate closure of the said account to save the taxpayers money from being swindled.

the Municipal Councilors had raised concern over the prolonged delay to start the construction of the Masaka City hall.

"We decided to engage the Police CID to open up investigations because the explanation of the Principle Municipal Treasurer and other relevant authorities regarding the said funds was wanting," a source from the district security committee said.

Masaka Municipal Council had sold the Municipal Park at Sh1.5 b in 2017 to a prominent trader, Moses Kalisa to start the construction of the City hall.

The then Municipal Town Clerk, David Amoco and the Municipal Mayor, Godfrey Kayemba Afaayo had been tasked  to file a report

"I had been informed by some whistleblowers about some municipal authorities who were benefitting from the sh 1.5b fixed on the municipal banks accounts for two years but the relevant officials refused to respond," he said. Behangana said he recently discovered that the sh 1.5b meant for the construction of the City hall was short of sh 150m.

He said the decision by the Municipal Town Clerk, Behangana to probe the matter ended up splitting the Municipal Executive committee, councilors, and municipal department heads.

The Masaka RDC, Herman Ssentongo was forced to summon the conflicting municipal council authorities, heads of departments, executive and the councilors to resolve the matter on January 6. The heated meeting which closed at 8 pm was attended by the District

The Municipal Deputy Mayor, Sarah Nakyanzi said the meeting was a waste of time.  In response, Ssentongo said he would also invite the anti-corruption team from State House to intervene in the matter.

Ssentongo said he wanted the construction of the said Townhall started a soon as possible.

The Municipal Finance Committee Chairperson Councilor, Siraje Luyima said some were shielding the   Namuleme over the financial mess. Namuleme said the said sum of the funds were withdrawn from the said account to pay for the City design consultants.

The racism within us