MENU
How to set up a home office
Previous Story

Dr Musenero: The woman at COVID-19 battlef...
Next Story

Adopting modern civilisation has come at a cost. Over the years, the norms and culture of the Batwa have become obsolescent.

Their language, dress code, food and lifestyle today are in sharp contrast to what was once their way of life.

In circumstances where the Batwa are compelled to shed off their old selves, it is disturbing that the country should lose one of its cultural diversities.

The tribe, which depended on forests, can neither trace its paths nor some of the cultural values.

Intermarriages have also contributed to a rift between the modern Batwa and their ancient culture, synonymous with conservation.

How Batwa survived in jungles

According to David Kakuru, who is in his late 70s, the Batwa used to sleep either in caves, bent tree trunks or on tree branches.

On cold nights and during family gatherings, they preferred to sleep in caves. This way, they would light a fire, for light and warmth. The fire would also scare away dangerous animals. 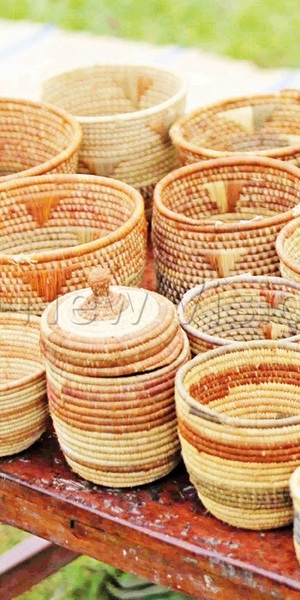 The Batwa survived on hunting and fruit gathering. Before going on hunting expeditions, the men would leave their wives and children under a shelter neatly and firmly built up using tree branches.

This was one way of protecting them from wild animals. After a successful hunt, men could carry the meat to their families.

During the hunt, it was prohibited to kill gorillas, chimpanzees and other apes that resemble humankind.

The Batwa believed that such animals were relatives of humankind.

Clothes were made from animal skins and sometimes from tree barks.

The Batwa had not yet succeeded at making shoes before they got evacuated from the forests.

Since the Batwa depended on forests, their habitat was their source of the medicines they needed for the treatment of different illnesses.

The Batwa had proper knowledge of which herb treated which ailment.

Culturally, women were not allowed to participate in hard tasks.

However, it was their duty to weave baskets, mats, among other crafts for home use.

Whenever a male from one community fell in love with a female, the former would take honey as bride price to the would-be wife's family.

He would also hunt for a rare bird specie and deliver it to the woman as a special gift, seeking her hand in marriage.

Once the couple agreed to marry, the two would move to another location to start a family.

The eldest in a community, regardless of gender, would automatically qualify as their leader (Omugurusi). This one would subsequently give counsel, as well as solve disputes.

The Batwa worshipped a god whom they referred to as Nyagasani.

They would occasionally meet under a certain tree to worship their god, which was perceived to be a quick connection between them and their god.

This is why the tribe conserved trees. All this lifestyle is now disappearing.

Tina Katushabe, the co-ordinator of Change A Life, Bwindi, a community-based organisation, has seen the construction of Batwa Heritage Centre, which preserves artifacts and information about Batwa culture.

Constructed with local material, the centre is located on the outskirts of Bwindi Impenetrable Forest to portray a sense of the lifestyle of the Batwa while still in the jungles.

Inside are traditional items, such as baskets, calabashes, medicine, barkcloth, and spears.

Katushabe says part of the proceeds got from visiting the centre go to Batwa communities, to boost their economic way of life.

"The Batwa men, who cannot do weaving, are engaged in beekeeping," Katushabe said.

She is advocating a Batwa Night, where tourists can be allowed access into the park to experience the life the Batwa lived.

According to Barbara Ndagire, a senior warden attached to UWA, cultural tourism is the way to go.

"We have Batwa trails in other regions and we shall certainly allow it here. UWA also allows harvesting of raw material used in weaving from the park," Ndagire said.

She implored Katushabe to write to them.

Yafesi Akampurira, the community development officer for Mpungu, says the Government disbursed sh637m to the sub-county to promote tourism.

He noted that the local council resolved to use the funds for constructing community lodges and a tourism centre, which is expected to start before the end of this year.

For long, the Uganda Tourism Board has advocated the promotion of community conservation and tourism as another tool for marketing Uganda.

Visiting different communities and blending into their way of life entails community tourism.

It does not only help in conserving bio-diversity, but also preserves different cultural norms.

Background story: The Batwa, who they were and what they have become

In the surroundings of Bwindi Impenetrable Forest in Ruhija, Mpungu sub-county in Kanungu district is a struggling ethnic group.

Originally, the Batwa inhabited the areas around the mountainous forests of Lake Kivu and Lake Edward.

The creation of national parks and economic development from the 1970s, led to the displacement of part of the communities.

According to a 2014 Uganda Housing and Population Census report, the Batwa were originally estimated to be 6,200, which number is reported to have reduced to 3,500.

Adjusting to a monetary kind of life, though initially hard, the Batwa are beginning to embrace change, where they not only have to engage in economic activities but also ensure that their children adapt to the modern civilisation of formal education and dress code.

Getting accustomed to being tagged ‘bush people', the Batwa schoolgoing children withstand bullying to climb the academic ladder.