MENU
A Fool's Day joke could land you in jail!
Previous Story

Employees bury a person who died suspectedly from COVID-19 at the Vila Formosa cemetery, in the outskirts of Sao Paulo, Brazil on Tuesday. (AFP)

The global death toll from the coronavirus pandemic continued to worsen Wednesday despite unprecedented lockdowns, as the head of the United Nations sounded the alarm on what he said was humanity's worst crisis since World War II. 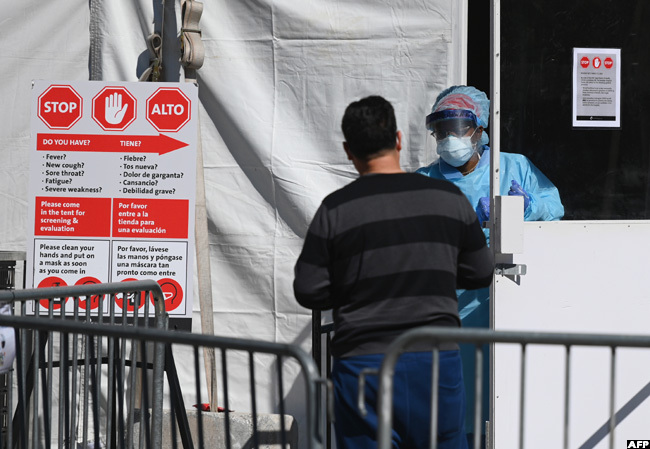 The warning came as Donald Trump told Americans to brace for a "very painful" few weeks after the United States registered its deadliest 24 hours of the crisis.

Well over 40,000 are known to have died, half of them in Italy and Spain, but the death toll continues to rise with new records being logged daily in the US.

"I want every American to be prepared for the hard days that lie ahead." America's outbreak has mushroomed rapidly. There are now around 190,000 known cases -- a figure that has doubled in just five days.

On Tuesday, a record 865 people died, according to a tally kept by Johns Hopkins University, taking the national toll so far to more than 4,000.

Members of Trump's coronavirus task force said the country should be ready for between 100,000 and 240,000 deaths in the coming months.

"As sobering a number as that is, we should be prepared for it," Anthony Fauci, the nation's top infectious disease expert.

America's under-pressure health system is being supplemented by field hospitals sprouting up all over New York, including a tented camp in Central Park, a hospital ship and converted convention centres.

But even with the extended capacity, doctors say they are still having to make painful choices.

"If you get a surge of patients coming in, and you only have a limited number of ventilators, you can't necessarily ventilate patients," Shamit Patel of the Beth Israel hospital said. "And then you have to start picking and choosing." 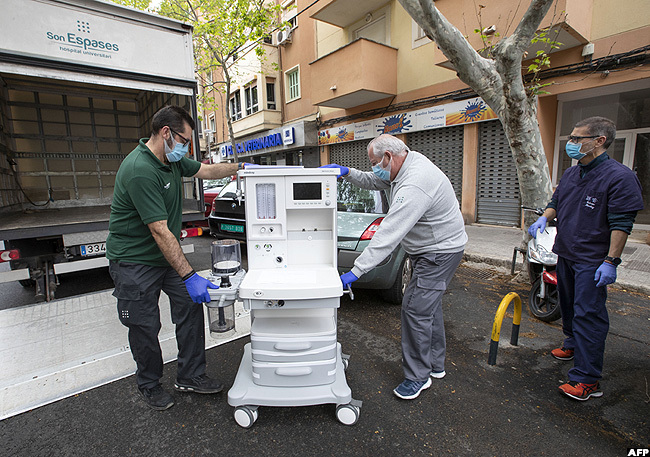 The extraordinary economic and political upheaval spurred by the virus presents a real danger to the relative peace the world has seen over the last few decades, UN Secretary-General Antonio Guterres said Tuesday.

The "disease... represents a threat to everybody in the world and... an economic impact that will bring a recession that probably has no parallel in the recent past."

"The combination of the two facts and the risk that it contributes to enhanced instability, enhanced unrest, and enhanced conflict are things that make us believe that this is the most challenging crisis we have faced since the Second World War," he said.

In virtual talks Tuesday, finance ministers and central bankers from the world's 20 major economies pledged to address the debt burden of low-income countries and deliver aid to emerging markets.

Last week G20 leaders said they were injecting $5 trillion into the global economy to head off a feared deep recession. 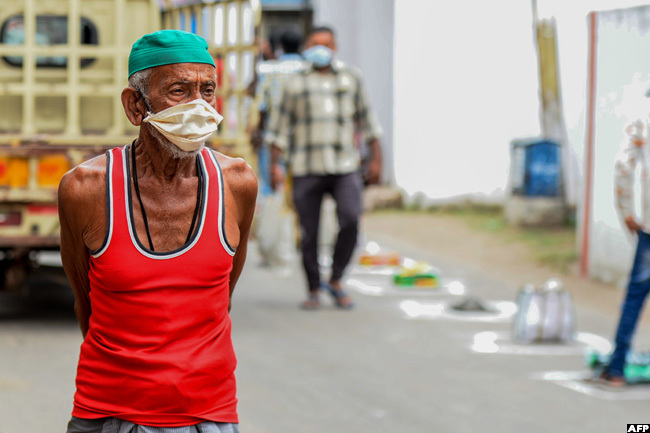 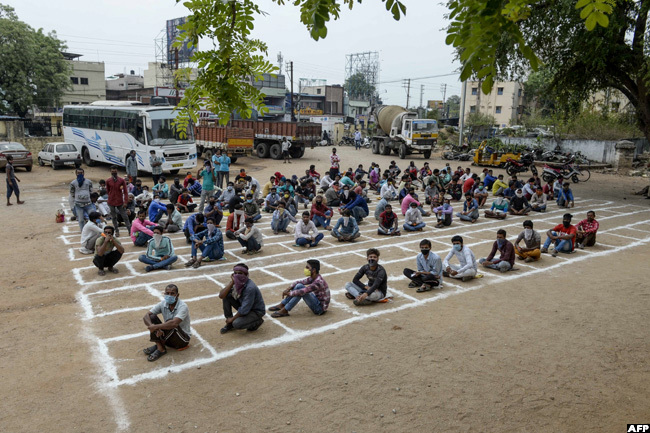 People sit inside marked areas as they wait to receive free rice distributed at a governement school ground in Hyderabad, India

In the European Union, however, battle lines have been drawn over the terms of a rescue plan.

Worst-hit Italy and Spain are leading a push for a shared debt instrument -- dubbed "coronabonds."

But talk of shared debt is a red line for Germany and other northern countries, threatening to divide the bloc.

Deaths shot up again across Europe. While there are hopeful signs that the spread of infections is slowing in hardest-hit Italy and Spain, which both reported more than 800 new deaths Tuesday.

France recorded a one-day record of 499 dead while Britain reported 381 coronavirus deaths, including that of a previously healthy 13-year-old.

That came after a 12-year-old Belgian girl succumbed to an illness that is serious chiefly for older, frailer people with pre-existing health conditions. 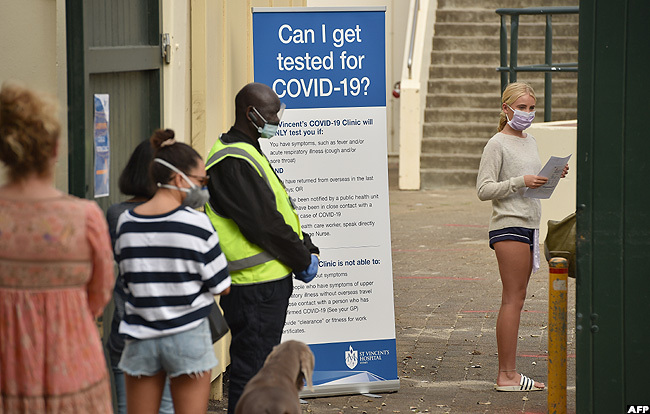 People line up at a COVID-19 coronavirus testing station at Bondi Beach in Sydney, Australia 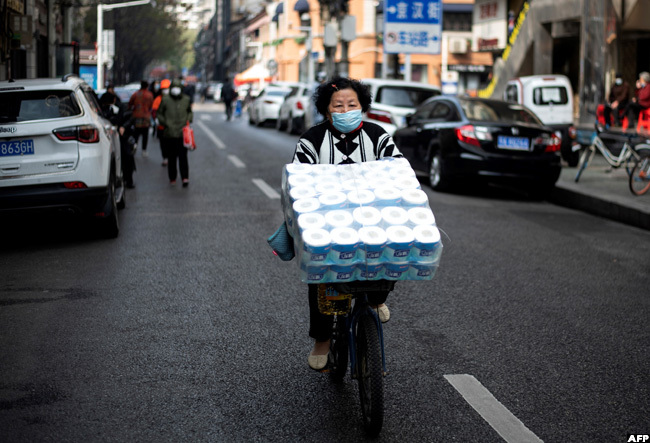 A woman pedals along a street in Wuhan, in China's central Hubei province on Wednesday

Lockdowns remain at the forefront of official disease-stopping arsenals -- a strategy increasingly borne-out by science.

Researchers said China's decision to shutter Wuhan, ground zero for the global COVID-19 pandemic, may have prevented three-quarters of a million new cases by delaying the spread of the virus.

"Our analysis suggests that without the Wuhan travel ban and the national emergency response there would have been more than 700,000 confirmed COVID-19 cases outside of Wuhan" by mid February, said Oxford University's Christopher Dye.

While many companies and schools around the globe have shifted to teleworking and teaching over video platforms, huge swathes of the world's workforce cannot and now face a deeply uncertain future. 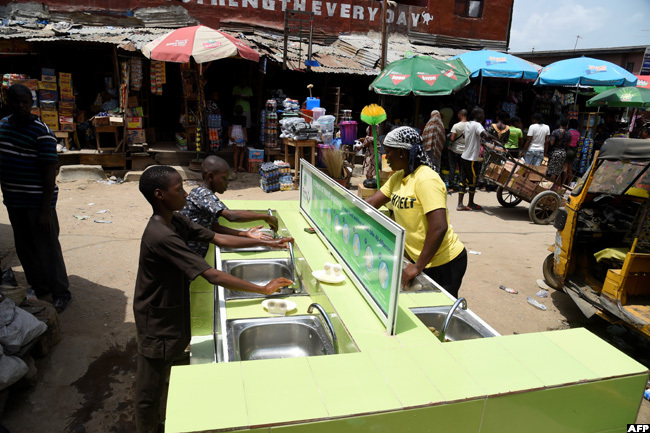 The economic pain of lockdowns is especially acute in the developing world.

In Tunisia several hundred protested a week-old lockdown that has disproportionately impacted the poor.

"Nevermind coronavirus, we're going to die anyway! Let us work!" shouted one protester in the demonstration on the outskirts of the capital Tunis.

Africa's biggest city Lagos was set for its second full day of lockdown on Wednesday -- but with some of the world's biggest slums, home to millions who live hand-to-mouth, containment will be difficult.

Are we taking the fire tragedies lightly?

Are we taking the fire tragedies in Kampala lightly?