An electoral official sits while a voter votes at a polling station during the parliamentary elections in Bamako on March 29, 2020. MICHELE CATTANI / AFP

Malians voted in a long-delayed parliamentary election on Sunday, barely a day after the country recorded its first coronavirus death and with the leading opposition figure kidnapped and believed to be in the hands of jihadists.

But then late Saturday, just hours before polls opened at 0800 GMT Sunday, the country's first coronavirus death was announced a 71-year-old man recently returned from France. Mali's number of confirmed infection has risen to 20.

"I came to vote, but I'm afraid," said Souleymane Diallo, a 34-year-old teacher voting in the capital Bamako.

"As you can see there's nobody here. Maybe because it's the morning, but it's also not surprising because of the situation." 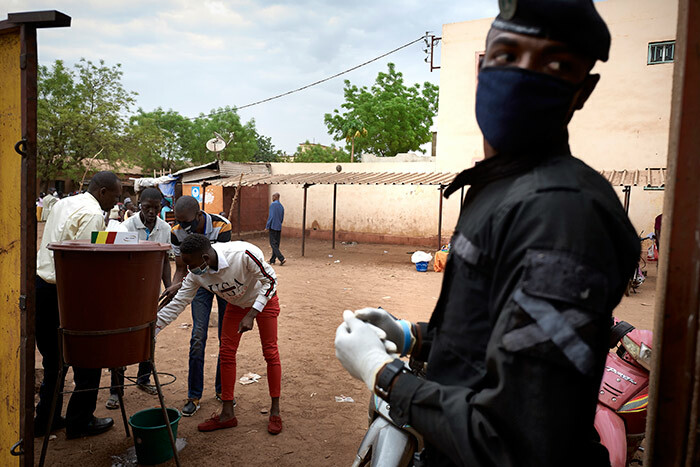 Malian voters wash their hands before casting their votes for the parliamentary elections in Bamako on March 29, 2020.

There are fears that the impoverished state of some 19 million people where large swathes of territory lie outside state control is particularly exposed to a COVID-19 outbreak.

Prime Minister Boubou Cisse admitted that turnout was not very large so far.

"I appeal to the voters: remember to respect the barrier gestures and use the sanitary measures," he said as he voted, adding that turnout was "sufficiently satisfactory".

It is the country's first parliamentary poll since 2013, when President Ibrahim Boubacar Keita's Rally for Mali party won a substantial majority.

Parliamentary elections were meant to take place again in late 2018 following Keita's re-election, but the poll was postponed several times, largely due to security concerns.

Some 200,000 people displaced by the near-daily violence in Mali's centre and north will not be able to vote, a government official has said.

Very few people showed up to polling stations in the northern city of Timbuktu in the morning, but attendance had somewhat increased by midday, an AFP reporter observed.

While the distance between people in lines was too close, voters did wash their hands before entering polling stations, the reporter said.

Polls are to close for Sunday's first round vote at 1800 GMT, with first results not expected for several days. A second round is scheduled for April 19. 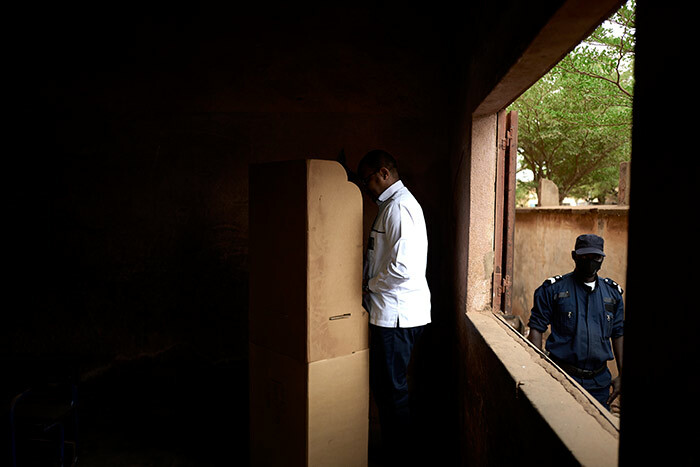 Casting a shadow over the vote is the fate of veteran opposition leader Soumaila Cisse, who was kidnapped on Wednesday while campaigning in the centre of the country.

Cisse, 70, who has been runner-up in three presidential elections, and six members of his team were abducted in an attack in which his bodyguard was killed.

It is "likely" he was being held by jihadists loyal to Fulani preacher Amadou Koufa, who leads a branch of the al-Qaeda-aligned GSIM active in the Sahel, according to a security source and a local official.

Cisse and his entourage were probably now "far from where they were abducted," the security source told AFP.

The government's election spokesman, Amini Belko Maiga, has admitted that voting conditions were not ideal.

"It's true that we cannot say that everything is perfect, but we're doing the maximum," he said, referring to the threat of coronavirus.

He added that hand-washing kits had been distributed in the countryside, while in Bamako, authorities would make masks and hand sanitisers available.

Cisse's Union for the Republic and Democracy (URD) on Saturday urged its supporters to turn out in even greater numbers in response to the leader's ordeal.

However several other opposition parties called for the vote to be postponed due to coronavirus fears.

The country has been plagued by conflict since 2012, when rebels captured much of the country's arid north.

Jihadists overtook the rebels in the north and swept into the country's centre, accelerating a conflict which has killed thousands of soldiers and civilians.

Despite the numerous difficulties, experts nonetheless hope that Sunday's election will lead to reforms that might drag Mali out of its cycle of violence.

In particular, the hope is that the new parliament will implement reforms from a peace agreement brokered between the Bamako government and several armed groups, in Algiers in 2015.

Implementation has been painfully slow, although this year saw the Malian army deploy units made up of both former rebels and regulars, one the provisions of the Algiers agreement.

The pact also provides for the decentralisation of governance in Mali, a demand of some of the rebel groups.