Barcelona to cut salaries in coronavirus f...
Next Story

CORONAVIRUS | 'I struggled to breathe'

"I felt heavy and after five minutes of movement I had to stop because I was struggling to breathe," says a Turin-based football star Paulo Dybala.

A general view of the city of Rome during Italy's lockdown following the COVID-19 new coronavirus pandemic. High profile figures, such as Juventus star Paulo Dybala, have been directly affected by the virus. (AFP)

"I felt heavy and after five minutes of movement I had to stop because I was struggling to breathe," says a Turin-based football star Paulo Dybala.

Juventus star Paulo Dybala has revealed how he "struggled to breathe" after contracting coronavirus which has killed over 9,000 people in Italy.

The Argentine international announced last Saturday he was one of three Juventus players to catch the virus along with Daniele Rugani and Blaise Matuidi, who both had no symptoms.

"A couple of days ago I was not well, I felt heavy and after five minutes of movement I had to stop because I was struggling to breathe." Dybala says he can now move and walk

Dybala added: "Now I can move and walk to start trying to train, because when I tried in the past few days I started to shake too much.

"I gasped for air and as a result I couldn't do anything, after five minutes I was already very tired, I felt the body heavy and my muscles hurt.

Dybala has scored 13 goals in all competitions this season, including in league leader's Juventus's last game against Inter Milan before Serie A and all sport in Italy was suspended.

"The goal against Inter was the greatest emotion, (Aaron) Ramsey provided the perfect assist - it's a pity that there was no public," added Dybala. 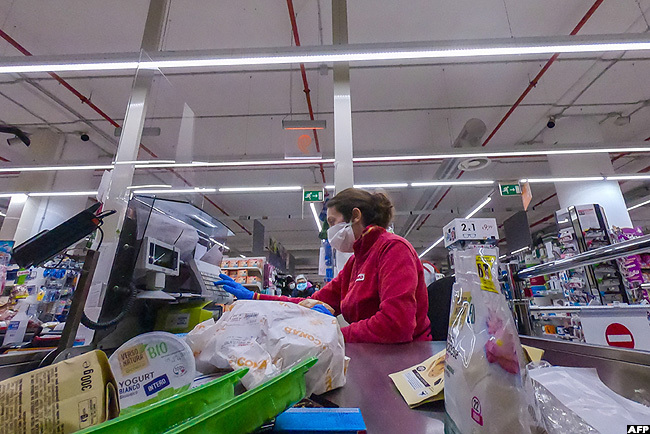 A cashier processes a customer's payment at a supermarket in Rome Italian milk farmer Massima Santoro, wearing a face mask, works on her farm in the countryside of Vottignasco, Piedmont A patient infected with the new coronavirus is being transported by medical staff from an airplane of the Italian air force to an ambulance and to a hospital for further treatment in Dresden, eastern Germany Italian Army trucks transporting coffins of victims of coronavirus cross the city of Bergamo, Lombardy, after leaving the Monumental Cemetery to bring the coffins to crematoriums in other regions where municipalities have made themselves available to accept them

MPs dash to court to block taxing of their allowances