50 Chinese nationals flushed out of Naguru...
Next Story

Rising water levels in Lake Victoria have displaced thousands of families from the fishing fraternity along with the Masaka landing sites amidst the prevailing Coronavirus crisis.

The water on the left side of the Lambu landing site has occupied a space of over 10 km including land that was recently procured by a staff of URA in Kampala according to the  Bukakata sub-county Council  Chairman, Joseph Jjuuko.

"One of my friends from URA had just bought land here worth sh200m to start a beach while another one had also secured land at a tune of sh120m," he said. 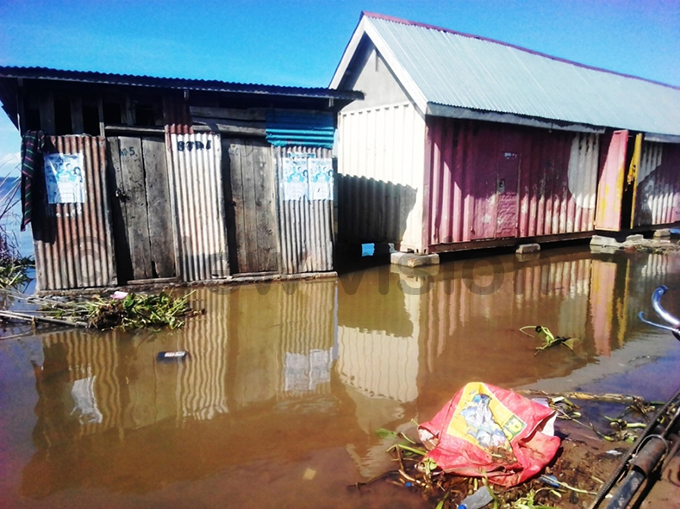 Juuko said it's not the first time for the rising water on Lake Victoria to submerge this Lambu landing site.   The New Vision learnt that the affected landing site used to serve as a Uganda Railway network base where a Ship used to dock.

Juuko said a similar scenario occurred in 1973 and 1979 when the Lake stretched beyond10km.      The former district environmental officer, Wilson Behwera said the situation will normalize after some time. He warned the public against environmental degradation.

The locals told said that efforts to reach their area MP, Florence Namayanja for help had turned out futile.  "Our area MP, Namayanja has abandoned us, we have been suffering from this problem for a period of two months and we do not see any support coming," Friday Sserunkuma a casual laborer at the landing site said.

Sserunkuma said that God must be angry with the communities for such calamities to happen at the landing site.  He said it all began in   2017 when hundreds of fishermen and their families were displaced after over 10 landing sites were closed for operating illegally.

"God must be angry with us, Initially UPDF displaced our families over illegal fishing and now the deadly coronavirus plus the rising waters on Lake Victoria that are sweeping our homes," he said.

"We are afraid that Cholera outbreak will soon strike, the place is  filthy," Sarah Nantubwa who operates a drug shop at Lambu said. She said the lack of toilets at the landing site is among the challenges.   Some of the fishermen and their families ease themselves in the Sand, lake and the nearby shrubs.

The Masaka RDC, Herman Ssentongo advised the communities in the affected fishing landing sites at Lambu to guard against coronavirus for their safety.

"Continue to wash your hands with soap regularly wherever you are, do not relax," he said.

At least 180 families at Kachanga landing sites related to Nyendo , nearby areas especially Kaziru landing site have been displaced.

Some of the families have shifted to Nyendo suburb in Masaka  Municipality where rental rooms go for  sh50,000 per month.

"We took our families especially the children and women in Nyendo where renting is cheap," John Sseruwu said.

He said the majority of the fishermen will remain on the lakeshores to continue fishing to raise money to feed their families.

The New Vision learnt that the majority of the landing sites in Masaka, Kalangala and Rakai serve as hideouts for hardcore criminals who do not want to be exposed.

Charles Ntesibe the LC 1 Chairman for Lambu landing site said the  Office of the Prime Minister should immediately intervene in the  matter with food relief and medical supplies.

He said the locals need soap and sanitizers to prevent Coronavirus  spread at the entry and exit points of the landing sites.

The district councilor representing Bukakata sub-county, Joseph Kimera  said coronavirus and the rising water levers that have displaced families and has paralyzed the fishing sector. "We have plenty of fish, exports have been affected, we have to survive on local market consumption, we pray that the Coronavirus is contained soon," he said.

Kimera who is the district finance committee chairperson, said the displacement of fishermen and Coronavirus are going to have severe spillover effects on the revenue base for Masaka district administration.

"Where is the district going to get revenue if the landing sites and the fishing sector is been paralyzed by the calamities, we need prayers," he said.