MENU
Coronavirus: When to use personal protective equipment
Previous Story

How Uganda is battling coronavirus
Next Story

The battle is real. No taking chances in Uganda

Brig. Balikuddembe said the army is to ensure government directives are implemented to stem the spreading COVID -19 virus from the neighbouring Kenya, D R Congo, Tanzania and South Sudan.

Brig. Balikuddembe said the army is to ensure government directives are implemented to stem the spreading COVID -19 virus from the neighbouring Kenya, D R Congo, Tanzania and South Sudan.

The Uganda Peoples' Defence Forces (UPDF) has deployed heavily along with more than a dozen ungazetted entries and exit at the Uganda- Kenya border as part of the government efforts to fight coronavirus in the country.

The 400-kilometre border stretch runs from Amudat to the horn of Uganda in Kaabong district.

The deployment comes amid intelligence reports that several foreigners and Ugandans were entering the country after cases of COVID-19 virus were confirmed in Kenya two weeks ago, an issue that prompted the government of Uganda to close its borders with the neighbours temporarily.

Others include Kotido - Kenya via Kotein, Kalapata-Oropoi via Kamion and Kaabong-Kush in South Sudan among others.

The UPDF 3rd Division Commander Brig. General Joseph Balikudembe made the revelation during an open-air task force meeting held at the Resident District Commissioner Office, at the Moroto district headquarters on Tuesday.

He said the army is to ensure government directives are implemented to stem the spreading COVID -19 virus from the neighbouring Kenya, DRC-Congo, Tanzania and South Sudan.

Balikudembe said they have also suspended peace meetings in the wake of the killer COVI-19 saying, "we have to ensure the safety of our people," he said.

Balikudembe said the army will continue dealing with cattle thieves militarily asking the local leaders to sensitize the raiders on the disease.

"I am worried the rustlers may raid COVID-19 or export it to other parts as they steal animals," he noted.

Balikudembe asked those intending to commit a crime to weight the difference between life and death in this era of coronavirus. 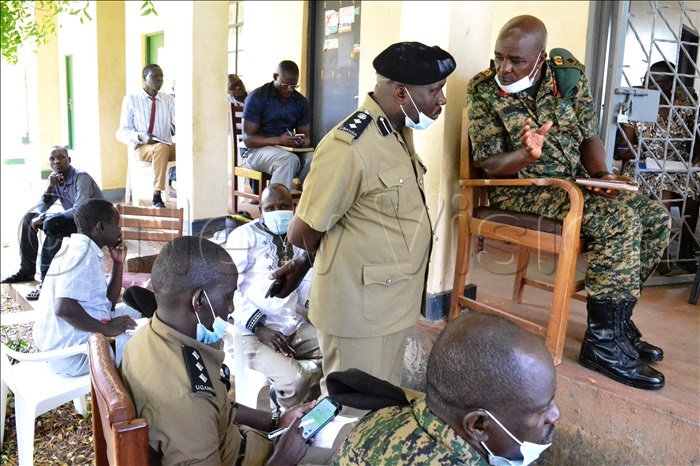 He condemned the raids saying the UPDF will handle the matter in all strongest terms to ensure peace is sustainable during the ongoing sanitary and hygiene crisis.

Balikudembe said the forces are aware of the duties and roles saying they are ready to stand behind their country in the fight against COVID-19 virus.

"We are doing this to ensure borders between people and the COVID-19 virus is maintained," the Resident District Commissioner Moroto Peter Ken Lochap said during the meeting.

He added that the fight is huge, thus hard decisions need to be taken to avert the global pandemic now in the East African countries.

"We need to contain the disease the way we handled the locusts a few weeks ago," Lochap said.

The World Health Organization consultant on disease control and prevention Dr Kenneth Kabali said this was the time to ensure we do not get the first case in Karamoja.

"We need to contain the first case with minimal delay to avert the community transmission," he noted adding that a lot needs to be done on social distancing in Karamoja.

Kabali further advised the parents to find means of uniting the children at home since they have come back from their respective schools.

The Kenyan liaison officer attached to the UPDF Maj. Kabasa Edward overseeing the security at the Uganda-Kenya border said the taskforce need relevant information in order to eradicate COVID-19.