Child beaten to death, mother cries for ju...
Next Story

The vice chancellor asked parents to make sure that they use this period to complete the tuition by April 6.

A parent in Mukono town taking her children from schools back home.

The vice chancellor asked parents to make sure that they use this period to complete the tuition by April 6.

President Yoweri Museveni on Wednesday, during the national address in regards to the prevention of the spread of coronavirus, ordered all schools, universities and tertiary institutions to close for a month, starting on Friday.

While addressing the media on Thursday, the UCU Vice Chancellor, the Rev. Dr. Can John Senyonyi, said though they were only remaining with two weeks to end the semester, they had already asked the students to prepare for their departure on Friday. Senyonyi said for the lecturers who had not yet completed their syllabuses, the university was making arrangements to have them do the online classes.

He said they were going to give the students take-home exams, which they will submit online after finishing at an agreed date.

"We can't compromise issues to do with health. We had to halt any programme and organize the departure of the students as per the President's directive," he said. Students walking infront of the UCU main building on Thursday.

However, Senyonyi said for the international students who may not have an adequate travel programme, they would make arrangements for them to have them adopted in families that are going to keep them safe for this period.

He said both teaching and non-teaching staff would continue with their routine work.

The vice chancellor asked parents to make sure that they use this period to complete the tuition by April 6, saying for any student who will not have completed fees payment, he or she will not be graded even when they are to give exams to all of them. A security officer disinfecting the students with sanitizers at the UCU main gate on Thursday.

Some students, however, showed dismay, saying the Government would have granted them one week to finish their exams and go back home.

Monica Tabu, a student, said though in regards to health the directive is good, the e-learning process will not be an easy task for a number of the students.

Tabu said in some of the villages where they were going, the network coverage is also very poor and they cannot access anything online. 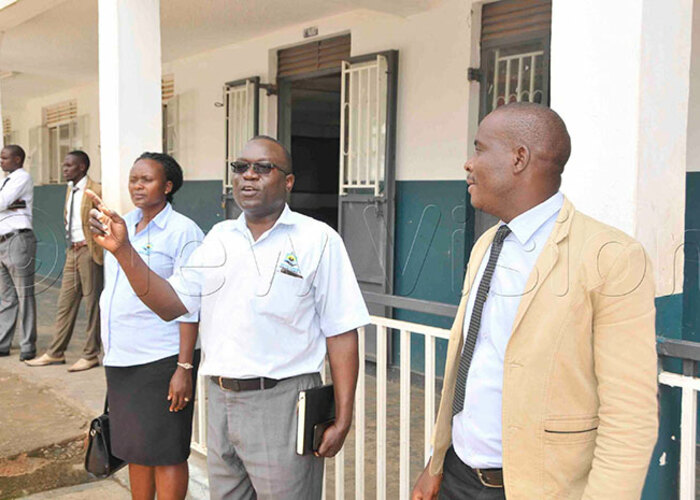 They went to Global Junior School, where they addressed the school community, including the teachers and pupils on matters regarding the coronavirus epidemic and the presidential directive ordering them to go home.

Dr. Kkonde asked the pupils to strictly stay at their homes and revise their books instead of loitering around the villages, where they would again get the deadly virus.

Bulya asked the school administrators to make sure that they close the schools and let all the children go back home, including candidates.

"We shall have operations and look for those schools which will keep some pupils at school. I want to give a forewarning that declining to close as per the Presidential directive, is a big offence which will lead the perpetrators to face the wrath of the law," she said.

The Global Junior School headteacher, Anthony Ssentongo, said they received mixed reactions from parents and pupils but they extensively had to explain to them that this was also beyond their reach. Students of Borgia High School on their way back home.

Ssentongo said some parents had started picking their children and the rest will be picked on Friday, which will be their official closure day.

At Cornerstone Junior School and other schools in Mukono, parents had started picking their children.